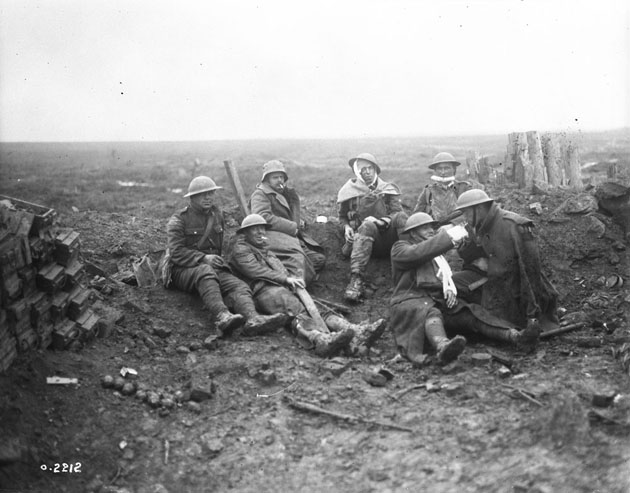 One hundred years ago on November 10, 2017, the Battle of Passchendaele came to an end. One of the bloodiest battles of First World War, there were more than 275,000 casualties after three months of fighting.

Friday, November 10, 2017 marks the conclusion of the 100-day Battle of Passchendaele, which was waged between Allied forces and German troops.

The battle, which started on July 31, 1917, witnessed a severe loss to the Canadian corps, especially between the days of Oct. 26 and Nov. 10, having lost more than 4,000 soldiers while 12,000 more were wounded—a heavy price to pay for a small nation of only eight million people.

Much like the Battle of Vimy Ridge earlier in that same year, Passchendaele helped cement Canada’s status as a nation emerging as its own entity, separate from that of Britain.

“It was a war where we stepped out onto the world stage,” Tim Cook, a historian at the Canadian War Museum, told CTV News. “It’s also a war that leaves deep scars in our country.” It was a “terrible battle,” he explains, on a field shredded by millions of shells where soldiers fought through “glutinous mud.”

By the time the Canadians arrived in Belgium, “there were unburied corpses, thousands of corpses in fact, and the Canadians were called there to deliver victory,” Cook adds. “They fought in four battles and they eventually captured that ridge.”

The Allies, led by commander-in-chief of the British Expeditionary Force Sir Douglas Haig and Canadian Corps commander Lieutenant-General Arthur Currie’, ultimately resulted in a victory—although it was also one of the most costly Allied offensives with more than 275,000 casualties. Earlier today, Prime Minister Justin Trudeau issued the following statement on the 100th anniversary of the end of the Battle of Passchendaele:

“Today, we mark the 100th anniversary of the end of the Battle of Passchendaele. On this solemn anniversary, we honour the thousands of Canadians who fought and died there, and pay tribute to their great courage and sacrifice.

“The Battle of Passchendaele has come to be a symbol of the worst horrors of the First World War. It began in the summer of 1917, as Allied soldiers sought to open a path through Western Belgium to coastal enemy bases. For months, Allies and enemies alike fought in conditions many described as a living hell; a landscape already broken by years of warfare; mud that swallowed men and horses, but refused to bury the dead.

“The Canadians joined the battle in October of that year. For weeks, they endured incessant rain and shellfire—but by mid-November, they had taken the ridge.

“Our soldiers fought an impossible fight with perseverance, valour, and commitment to a greater cause. Nine Canadians would earn the Victoria Cross for their bravery. Yet the battle came at a devastating cost. 16,000 Canadians were killed or wounded—and thousands of families forever changed.

“On this solemn anniversary, we honour the great heroism and sacrifice of those who fought in the Battle of Passchendaele. Tomorrow, please pause to remember and honour those who have served, and continue to serve, so that we may live in peace.