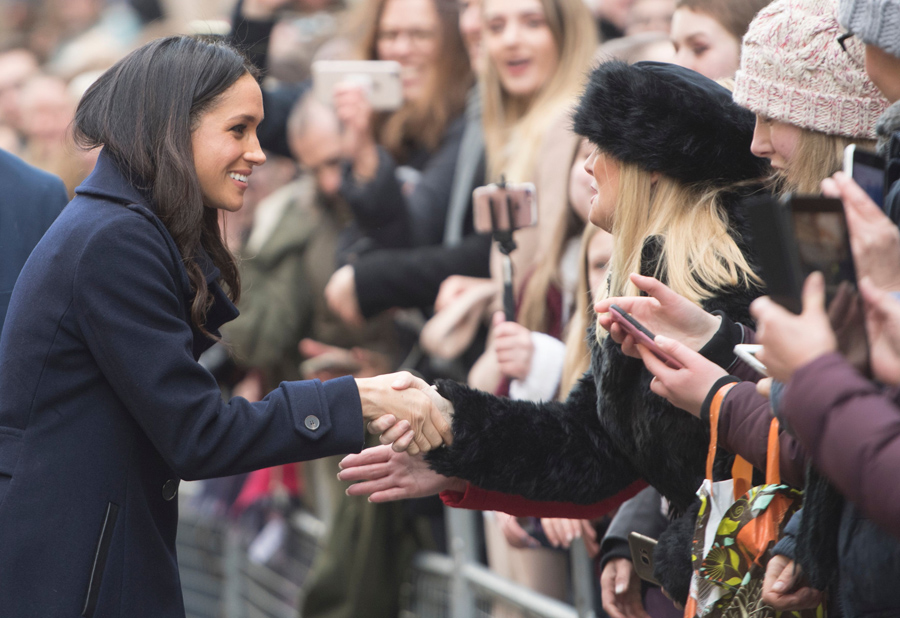 In a total break from royal tradition, the American actress will take part in the annual celebrations held at Sandringham House. Here, what you need to know about how the royals spend Christmas.

It’s been an unconventional courtship by royal standards: In a whirlwind 16 months, Prince Harry and Meghan Markle have moved in together, announced their engagement and, now, are set to spend the holiday season together—making the American actress an exception to traditional royal protocol.

Reports have confirmed that Markle will become the first royal fiancée to spend Christmas Day with the royal family. By comparison, Prince William and Catherine, Duchess of Cambridge, spent Christmas apart, despite announcing their engagement in November 2010. It seems in keeping with the (at-first, controversial) high-profile relationship and the media storm that has surrounded the couple since people first caught wind of their romance.

Markle will join the rest of the royal family for the holidays at Sandringham House, the Queen’s private estate in Norfolk. The celebrations begin on Christmas Eve where everyone meets in the White Drawing Room to exchange presents and finish decorating the 20-foot tree before freshening up for the formal dinner. In the morning, each member will be met with a fresh bowl of fruit at the end of their beds. Royal historian Kate Williams told the BBC: “It’s quite set, it’s quite formal. It’s looked pretty much the same since the Queen’s youth, since the 50s. You arrive when told to arrive…There are quite a lot of different dresses required—change for church, change for dinner.”

RELATED: The Royal Family and Sandringham

The former Suits star has already gotten into the holiday spirit. On Dec. 11, Markle made a surprise appearance (well, surprise to us, at least) at the Queen’s annual staff Christmas party at Windsor Castle, which also happens to be the setting for her upcoming nuptials in May 2018. According to Daily Mail royal correspondent Rebecca English, Markle greeted several of the Queen’s staffers and was “charm personified.” The attendee revealed that, “She was unbelievably beautiful and Harry looked so proud.” Unfortunately, no photographs were taken to mark the occasion, so we’ll just have to use our imagination—although we do have these insider tweets from English:

Between private tea meetings with the Queen and more than a little PDA with her dashing prince, Markle has won over the hearts of royals watchers across the globe. Although there’s nothing in the “royal rulebook” to restrict or discourage public displays of affection between couples, most royal members tend to refrain from holding hands while out in public in an official capacity. Not so, for the prince and his lady love. The two made their first official public engagement for World AIDS Day charity events on Dec. 1, unabashedly clutching each other’s hands and rubbing each others’ backs.

Perhaps it’s that general “stuffiness” we’re so used to seeing when it comes to royal relationships in the past that makes the romance between Prince Harry and Markle all the more relatable and decidedly un-royal. In a monarchy often chastised for their outdated methods and traditions, these two lovebirds are a breath of fresh air.

“It certainly makes a statement,” etiquette expert Myka Meier told PEOPLE. “To show PDA as a representative of the British monarchy at such an official event says everything! Rarely in the past have we seen unmarried royals showing PDA with significant others at a public event.”