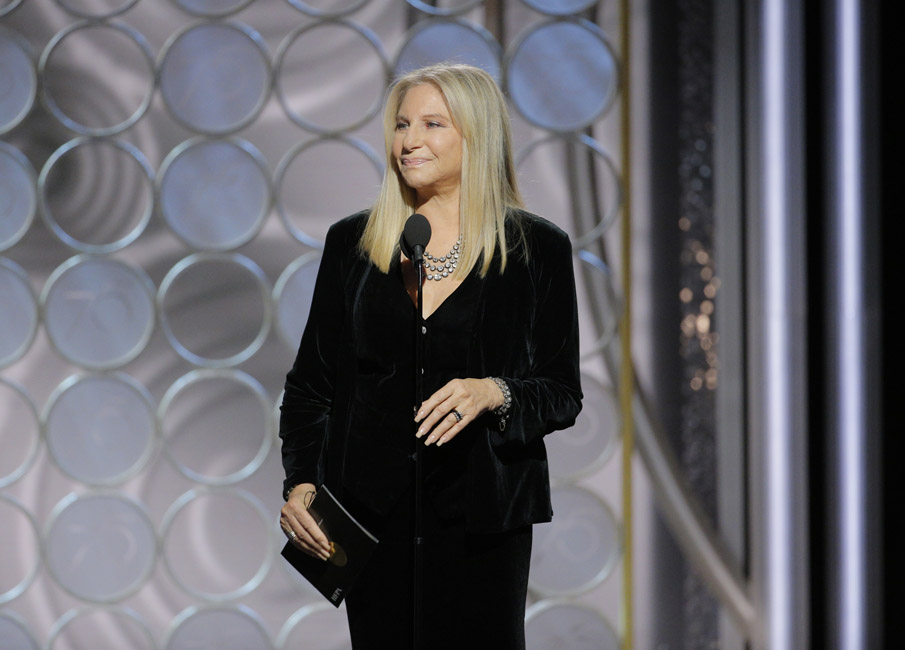 For years, everyone knew the running joke about legendary director Martin Scorsese and the Oscars – the punch line being that he hadn’t won one. The joke wasn’t “ha ha” funny but one that had people, myself included, rolling their eyes at the absurdity of the fact that the director of Taxi Driver, Raging Bull, The Last Temptation of Christ, Goodfellas and so many other classics had never won the big one. Even Oscar host Jon Stewart, during the 2006 ceremony in which rap group Three 6 Mafia won the Academy Award for Best Original Song for “It’s Hard Out Here for a Pimp,” quipped on air that, “For those of you keeping score at home, Martin Scorsese, zero; Three 6 Mafia, one.” The audience laughed. Scorsese laughed. People at home laughed. And the next year, Scorsese tied Three 6 Mafia in Oscar wins when he picked up the Best Director nod for The Departed. Finally, all was right with the world.

Fast-forward to the 2018 Golden Globes, when Barbra Streisand took the stage as an award presenter and was announced as the only woman to ever win the Golden Globe for Best Director. She was visibly caught off guard at hearing the stat on stage, repeating it herself before noting, “That was 34 years ago? Folks, time’s up!” And that’s when it dawned on me that we all knew Martin Scorsese’s awards history and speculated on it every Oscar season pre-2007 – “Is this his year? Will he be snubbed again?” – but so few of us, including Barbra Streisand herself, were aware that Babs was the only female director to ever win a Golden Globe.

It’s no fault of Scorsese’s, but the fact is that most of us knew the Oscar history of one man but were completely oblivious to the acknowledgments, or lack thereof, of an entire gender’s Golden Globe history. Streisand, 75, took to Twitter later in the evening to expand on her thoughts about being the only female to ever win the Golden Globe for Best Director, calling it a “terrible fact” while noting that directors Dee Rees (Mudbound) and Patti Jenkins (Wonder Woman) weren’t even nominated.

Here’s a terrible fact— There has not been a single woman who has won the Golden Globe for Best Director since I was fortunate enough to win it for Yentl in 1984…that’s 34 years ago! Not right!

In my humble opinion, I was very disappointed that director Dee Rees and her powerful film @mudboundmovie wasn’t even nominated.

I also would have liked to see director @PattyJenks and her film @WonderWomanFilm recognized because it shows how strong women can be, not only as characters but also at the box office. The three highest-grossing films last year were all carried by women.

Indeed, the entire roster of 2018 Golden Globe Best Director nominees was made up of men – a point actress Natalie Portman, in presenting the award, went off script to point out, much to the surprise of her co-presenter, director Ron Howard. Others took to Twitter to decry the fact that Greta Gerwig, who wrote and directed the almost universally lauded Lady Bird, which earned four Golden Globe noms and won two – Best Motion Picture – Musical or Comedy and Best Performance by an Actress in a Motion Picture – Musical or Comedy (Saoirse Ronan) – wasn’t even given the credit of a Best Director nomination. And that’s not even taking into consideration the slew of great female director nominees from years past who didn’t win, from Kathryn Bigelow (The Hurt Locker – which won Bigelow a Best Director Oscar, making her the only woman to accomplish that feat, Zero Dark Thirty) to Ava DuVernay (Selma) to Sofia Coppola (Lost In Translation) and Jane Campion (The Piano). Then there are the immense talents like Penny Marshall, Sarah Polley, the aforementioned Dees, Gerwig and Jenkins, and so many others who’ve never even been nominated.

Streisand and Portman’s stance for female directors echoed the mood at the Globes, at which most of the attendees wore black in solidarity with the Time’s Up movement, a sequel of sorts to the #MeToo movement, empowering women to speak up against sexual abusers in and out of Hollywood. A number of high-profile 45-plus stars made powerful statements on the matter, including Laura Dern, 50, who declared, “Many of us were told not to tattle. It was a culture of silencing and that was normalized. I urge all of us to not only support survivors and bystanders who are brave enough to tell their truth but, to promote restorative justice, may we also protect and employ them. May we teach our children that speaking out, without the fear of retribution, is our culture’s new North Star” while accepting the award for Best Performance by an Actress in a Supporting Role in a Series, Limited Series or Motion Picture Made for Television for Big Little Lies.

Her co-star, Nicole Kidman, 50, in accepting the Best Performance by an Actress in a Limited Series or a Motion Picture Made for Television award, noted, “My mamma was an advocate for the women’s movement growing up. My achievements are her achievements,” while Meryl Streep, 68, spoke about the Time’s Up movement and the coordinated effort of stars wearing black to the event while on the red carpet. “I think that people are aware now of a power imbalance and it’s something that leads to abuse,” she said. “It’s led to abuse in our own industry and it’s led to abuse across the domestic workers’ field of work. It’s in the military. It’s in Congress. It’s everywhere, and we want to fix that. And we feel sort of emboldened in this particular moment to stand together in a thick black line, dividing then from now.”

Also on the red carpet, Will & Grace star Debra Messing, 49, tackled the gender age gap when she called out E! News while being interviewed by them, noting the departure of former network host Catt Sadler last December after learning she got paid half of what her co-host, Jason Kennedy, earned for the same job. In a live interview Messing noted, “I was so shocked to hear that E! doesn’t believe in paying their female cohost the same as their male cohost. I miss Catt Sadler. So we stand with her. And that’s something that can change tomorrow. We want people to start having this conversation that women are just as valuable as men.”

And to top off the evening, Oprah Winfrey, 63, delivered what will be remembered as one of the great speeches in award show history while accepting the Cecil B. DeMille Award, which she began by recalling her own childhood inspiration of seeing Sidney Poitier become the first black person to win the Golden Globe for Best Actor in 1963 for Lilies of the Field. “In 1982, Sidney received the Cecil B. DeMille Award right here at the Golden Globes, and it is not lost on me that at this moment there are some little girls watching as I become the first black woman to be given this same award,” she said. “So I want all the girls watching here and now to know that a new day is on the horizon! And when that new day finally dawns, it will be because of a lot of magnificent women, many of whom are right here in this room tonight, and some pretty phenomenal men, fighting hard to make sure that they become the leaders who take us to the time when nobody ever has to say, ‘Me too,’ again.” By the time Oprah finished the crowd was standing and more than a few wiped tears of inspiration from their eyes. On that night, in that room, broadcast around the world, women were finally heard, loud and clear.

It’s no joke, and it’s certainly not “ha ha” funny. And something tells me that, going forward, we’re all going to remember exactly how many women have been nominated for, and have won, that Best Director Golden Globe.