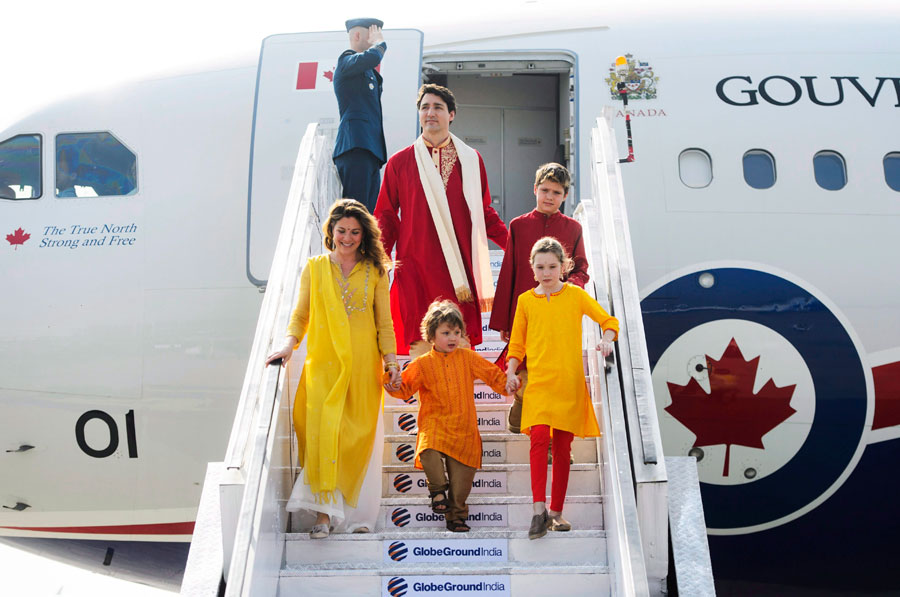 There is such a thing as trying too hard – especially in fashion circles – or, to take it a step forward, a fashion circle within a political sphere upon a world stage. And that’s just what we have with Prime Minister Justin Trudeau and his telegenic family as they toured India dressed in traditional Indian clothing, causing international mockery. Some have referred to their wardrobe choices as “Too Indian for an Indian.”

Yet on each stop on their state visit, it’s another outfit change for en familie and another opportunity for locals and the rest of us to snicker. Indeed, when the Trudeaus met with some stars of Bollywood, the actors showed up in suits, not saris. The Trudeaus … well, take a look at the image of the PM and his family with actor Shah Rukh Khan, looking dashing in a black suit. In other words, the first family  look like they’re dressing up for a politically incorrect masquerade ball.  Which is saying something, given the PM is one world leader seeming hellbent on being seen as the globe’s most “woke” leader in terms of diversity and culture sensitivity.

Back when U.S. President Barack Obama and First Lady Michelle arrived on their Indian trip in 2015, she stepped of the plane in a piece designed by an Indian designer. But it wasn’t traditional dress. Obama wore a suit.

So what happened? A stylist gone mad? If so, how much is that costing in tax dollars? Stay tuned on who is footing the bill.  If it’s the taxpayer, then that truly is something to be sari for.

At least Trudeau can be mildly thankful that his colourful wardrobe has overshadowed the more serious faux pas of inviting attempted murderer Jaspal Atwal to an official dinner.

Still, even after all the criticism, missteps and style snafus over the past several days, this happened!