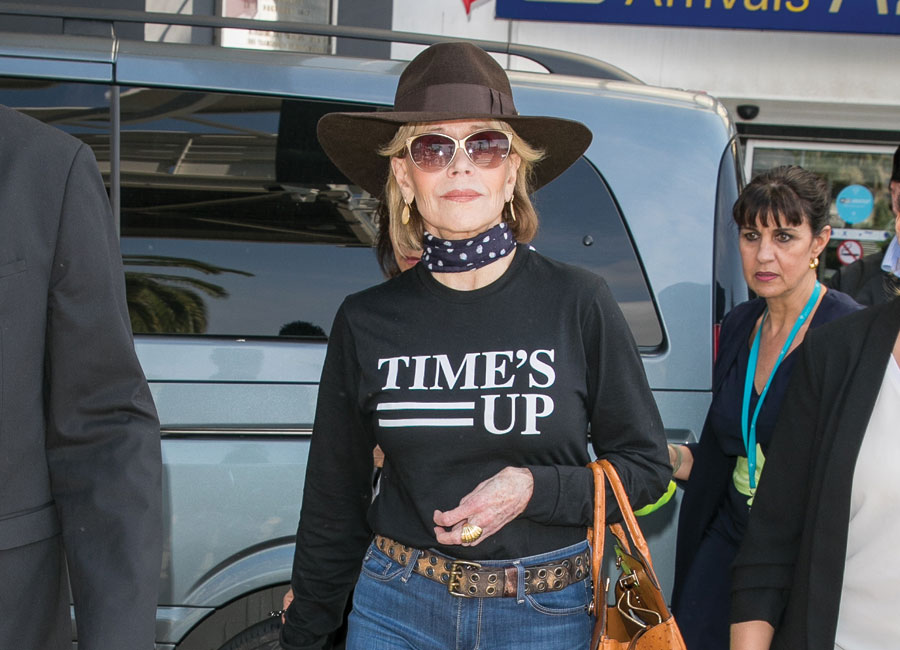 On the Croisette red carpet, there is still an outdated dress code rule that women shall not wear flat shoes. Chanel-approved actor Kristen Stewart very deliberately removed her sky-high pumps and walked barefoot in silent protest.

The world’s leading women at the Cannes film festival were united in pushing the boundaries of what is beautiful and what is sexy – the traditional rules of glamour – for all ages. In fact, the fashion shift that really spoke volumes was the number of women wearing pantsuits as formalwear this year, a chic and loaded statement.

The president of the majority-female jury this year was 49-year-old fashion icon Cate Blanchett. She busted out a flurry of pantsuit looks for the flashbulbs, including a pale pink suit by Stella McCartney. Earlier in the week, she also wore a sporty lemon-coloured Calvin Klein suit with athletic stripes down the leg.

She was flanked by fellow jury members Stewart (in a cropped blue Chanel nubby tweed pantsuit) and French star Léa Seydoux in a sharp green trouser suit by Louis Vuitton. Another standout pantsuit look on the Riviera was the Armani black one worn by Bollywood royal Aishwarya Rai Bachchan, who is 44.

Fashion has become a statement-making tool for Hollywood women and female actors the world over to declare Time’s Up and Me Too. From the female stars who near-unanimously wore all black at the Golden Globes to the single white rose carried by female Grammy stars, fashion has made a powerful statement.

Fittingly, the last word on liberated fashion at Cannes comes from a woman who literally embodied protest in 1970s: Jane Fonda, who recently turned 80. The actress had a very glitzy week at the movie competition on the Riviera this year, with her clothes, her words and her actions. As Vanity Fair put it, Fonda is having “an exceptionally fashionable Cannes.” She rocked a long beaded Valentino with a duster coat one night and then did a quick change to flash a diamond-belted custom Alberta Ferretti suit – in that symbolic white – for a Trophée Chopard event.

She was clear about her loyalties and priorities as she arrived in the French city wearing jeans and a Times Up T-shirt. The forthright celebrity also recently made waves on the promo tour for her new gal-pal rom-com Book Club, which is about the importance of friendship and sex in mature women’s lives. She candidly declared that while to each her own, she herself no longer has sex, with the no-bones statement: “I’ve closed up shop down there.”

Helen Mirren, another thespian noted for her timeless beauty and fashion sense, as well as her no-bullshit attitude, also made a splash on the Mediterranean. She lost a shoe (the theme continues) when she fell – as she put it “ass over tits” – to face-plant on the red carpet. She went on to make fun of both herself and the hoopla and to praise stunt actors. She also revealed that once when “very drunk” she got a tattoo, which itself has a lovely back story, applicable to the theme at play at Cannes. The intertwined VVs on her hand, done with a safety pin, to symbolize “equal and opposite,” or the idea that people can be very different from you but have the same value as yourself. The racy-but-poignant admission took place at a L’Oréal Worth It event: like Fonda, the 72-year-old is one of the beauty megabrand’s ambassadors; L’Oréal is also an official sponsor of the Cannes Film Festival.

But the most powerful moments were silent ones. Such as the red-carpet protest by 16 international black female actors, which highlighted the lack of diversity in French film. It was led by 43-year-old Senegalese actress Aïssa Maïga and 58-year-old Burundian singer Khadja Nin, who is a judge on this year’s jury.

The number was deliberate, as only 82 female directors have been invited to show their films over the festival’s 71 years. That compares to 1,645 male directors. After the demonstration, Blanchett and Agnès Varda, the diminutive, witty 90-year-old Belgian director read a message calling for inclusion, better working conditions and equal pay for women around the world.

In response, the festival executive did sign a diversity commitment specifying transparency around film selection and improved representation of women on the Cannes board.

It seems the mature female stars of Hollywood have learned to use the power of their voices and unique platforms, both on and off the screen. And their acts of protest – small and large, loud and silent – are fuelling a larger movement by women and for women the world over.