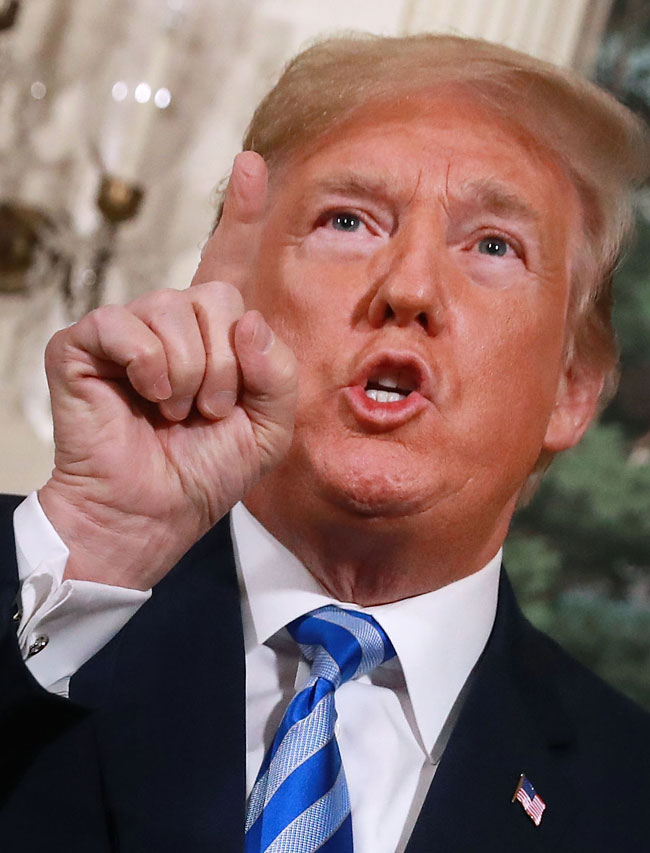 U.S. President Donald Trump announces that he will kill the Iran Nuclear Deal and impose economic sanctions on the regime. (Photo by Chip Somodevilla/Getty Images)

U.S. President Donald Trump announced today that he will pull America out of a nuclear deal with Iran, re-imposing sanctions that could have grave geopolitical and economic repercussions on the troubled Middle Eastern state.

In order to prevent Iran – which he called the “leading state sponsor of terrorism” – from gaining a nuclear weapon, the President told a televised audience that he will withdraw from The Joint Comprehensive Plan of Action, an accord enacted in 2016 between U.S., Britain, China, France, Germany, Russia and Iran. Under the terms of the deal, Iran would cease developing its nuclear program and in return it would receive an estimated $100 billion in assets that were hitherto frozen in foreign banks.

After listing Iran’s links to global terrorism, Trump claimed: “The regime has funded its long reign of chaos and terror by plundering the wealth of its own people.”

Negotiated by the Obama administration, Trump was never a fan of the JCPOA, calling the accord “the worst deal ever.” Obama reacted to the cancellation of the deal immediately on Twitter, issuing a full statement and calling Trump’s move a “serious mistake.”

The problem with the deal, noted the President, is that it imposed only “weak limits on the regime’s nuclear activity” and allowed the country to build “nuclear capable missles” and “continue enriching uranium over time and reach the brink of a nuclear breakout.”

The U.S. move comes days after Israeli Prime Minister Benjamin Netanyahu published documents revealing that Iran hadn’t given up on its nuclear aspirations. Netanyahu called on Trump to cancel the deal, saying, it had to be “fully fixed or fully nixed” or “you will end up with Iran with a nuclear arsenal.”

Iran’s President Hassan Rouhani put on a brave face on Trump’s announcement, saying “it is possible that we will face some problems for two or three months, but we will pass through this,” Rouhani said.

However, Iran’s economy has been struggling even without the sanctions and unrest is growing among the people. There is a possibility Rouhani could forge a new deal with its non-U.S. partners but that seems remote if it means they have to stop doing business with the U.S.

One immediate fallout of the sanctions could see the flare up of tensions in the Middle East. Israel’s army has gone into high alert. “For months now, Iran has been transferring lethal weaponry to its forces in Syria, with the purpose of striking at Israel,” Netanyahu said. “We will respond mightily to any attack on our territory.”