Ontario Election Called for June 7: Here’s How the Race is Shaping Up 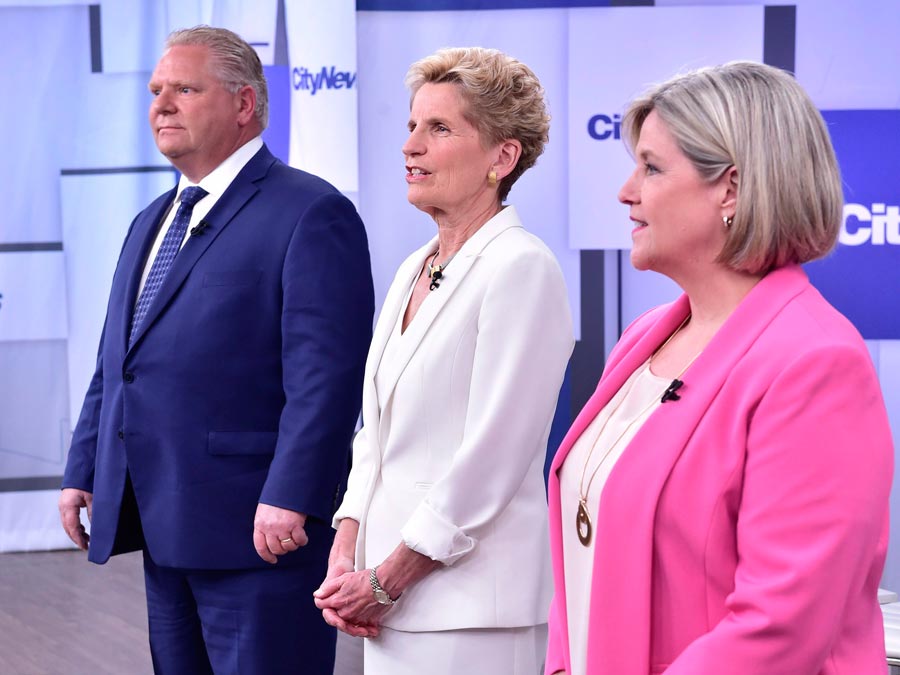 Ontarians will be heading to the polls June 7 to elect a new Premier.

As the race gets underway, Doug Ford’s Progressive Conservatives enjoy a big lead over Andrea Horwarth’s NDP and Kathleen Wynne’s Liberals. An Ipsos poll found that, if the election were held tomorrow, 40 per cent would vote PC, 29 per cent for NDP and 26 per cent for the incumbent Liberals.

Leading up to the election, there are three questions facing voters in the province:

And when it comes to the leaders themselves, no one seems particularly enthused by the idea of any of these three becoming the province’s next premier. Another Ipsos poll asked voters who would make the best premier of Ontario found none of them cracked 40 per cent. Andrea Horwath and Doug Ford are virtually tied (38 and 37 per cent respectively) while only 19 per cent think incumbent Kathleen Wynne would make the best leader.

With under a month to go to election, let’s look at the platforms and prospects for each of the three parties.

Message: The PCs are positioning themselves as the party that will clean up the mess left by a decade and a half of Liberal mismanagement. Ford keeps hammering home on two talking points that have resonated with voters outside Toronto: a) voters have had enough of the Liberal’s wasteful spending habits and b) they want something done about their skyrocketing hydro bills.

Platform: “I have a message for Kathleen Wynne: The party with the taxpayers’ money is over. (Full Party Platform)

Prospects: To maintain his early lead, Ford must doggedly stick to his talking points and try to avoid the controversy that undid his brother Rob during his tumultuous term as Mayor of Toronto. The other leaders know he can be a loose cannon and will make every effort to poke and prod him into saying something foolish. Although both Wynne and Horwath both tried this in the first debate, Ford remained on message. And before we hand victory to the Tories, remember – we thought the PCs were poised for victory in the last election, that is until then leader Tim Hudak suddenly started talking about slashing public sector jobs.

Message: Andrea Horwath must have had a smile on her face when she woke up to polls showing the NDP in second place, ahead of the Liberals. While Ford and Wynne trade barbs, Horwath is positioning herself as a leader capable of rising above insults and just getting down to business. The NDP has also subtly shifted its platform toward the centre of the political spectrum, edging out the Liberals at their own game.

Platform: “A plan that offers hope. A leader we can count on. Be a part of it.” (Full Party Platform)

Prospects: The NDP will struggle to instill confidence in voters that they’re capable of running a province. With Ontario already mired in yearly deficits and ballooning debt, will high-cost programs like universal drug and dental coverage and buying back Hydro One scare voters? Horwath must make her case that the NDP are not just another version of the Liberal Party, and that they’re capable of running a fiscally responsible government.

Message: Kathleen Wynne’s Liberals are blasting away at Ford, painting him as a troglodyte Conservative who will slash program spending and favour the wealthy. Negative political messaging can be effective but not when the incumbents have presided over rising hydro costs, declining health care deliver a moribund economy and a pile of debt with little, if anything, to show for it.

Platform: “Can we count on you?” (Full Party Platform)

Prospects: The Liberals are in heap of trouble. Their unpopularity is no doubt partly due to the fact they’ve been in power so long. But there are also other factors, including Wynne’s bashing of seniors, the pesky power-plant scandal, the irresponsible budgets, the dodgy bookmaking that’s hiding billions in spending and the fact that they just seem to have run out of ideas. If Wynne somehow manages to pull this one out, she should be hailed as the greatest politician in Ontario history. A more plausible outcome will see voters abandoning the Liberal party and either sitting out this election or voting NDP in an effort to avoid Doug Ford as premier.