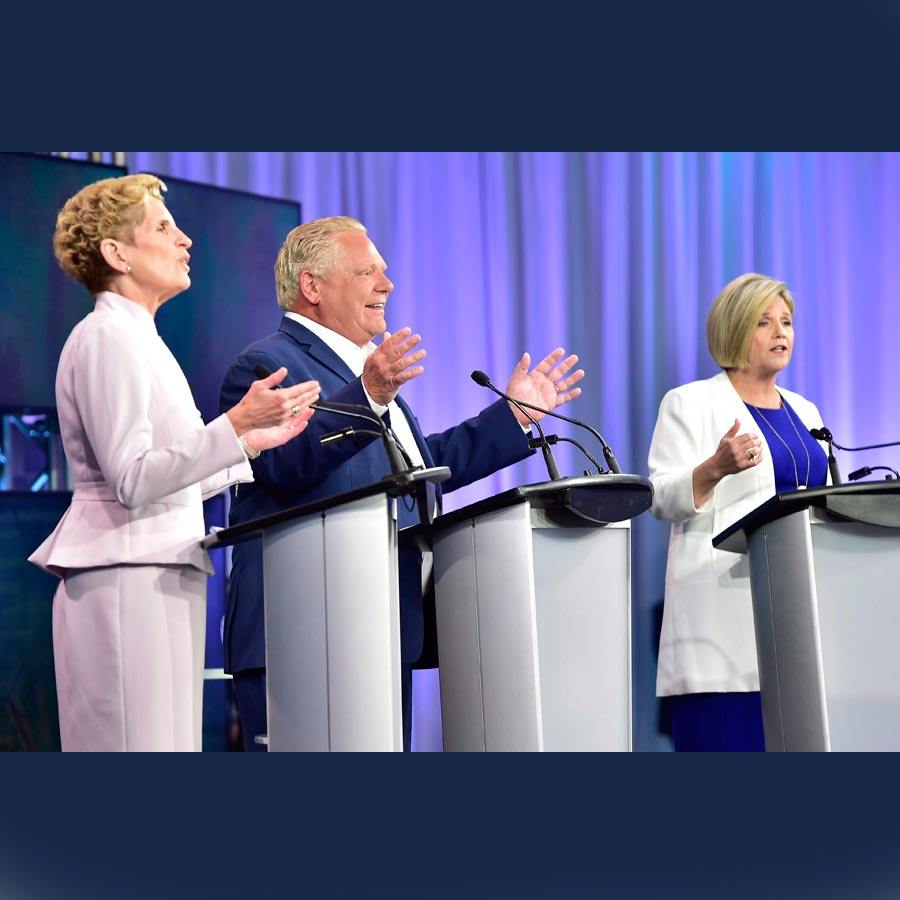 The final televised debate of the Ontario election campaign on Sunday night pitted the two frontrunners – Doug Ford and Andrea Howarth – firing potshots at each other and third-place Kathleen Wynne trying anything to climb back in the race.

Howarth, who began the day with her NDP unexpectedly in a virtual dead-heat  for first place, spent much of the debate fending off attacks from the Progressive Conservative’s Ford about the claim that her party’s fiscal program has voters terrified it will destroy the province’s finances. Wynne, meanwhile, began the debate with a curious gambit, apologizing for the fact that people don’t like her, but not apologizing for her party’s governing record.

Here are the best one-liners from a very lively Ontario election debate, courtesy of the Toronto Star, the Huffington Post, the National Post and CBC.

“You think things are bad under the Liberals — and they’re bad — they’re going to get 10 times worse under the NDP.”

“[The NDP] plan will annihilate the middle class.”

“I travel around, I’ve talked to hundreds and hundreds of companies — they are terrified of the NDP coming in.”

“God forbid the NDP ever get in. They will destroy our province, destroy our economy. That’s a fact.”

“Who do you trust with your money? The NDP can’t do math and the Liberals are cooking the books.”

“Not one single person will lose their job [under the PC’s plan to cut $6 billion from the budget.]

“If a brewer wants to offer you a buck-a-beer, there is no reason for government to stand in the way.”

“You wouldn’t buy a used car without looking under the hood.” (Referring to the fact that the PCs haven’t released a detailed health-care platform yet.)

“Mr. Ford, of all people, you have police investigations by three different police forces into candidates. Not from things that were dug up 10 years ago on Facebook, but right now, from data that was stolen from (Highway) 407 records. That’s you and your candidates and your party.”

“This is an election where we can actually make change for the better. It’s not about slogans and bumper stickers.”

You [Wynne] have been in power for 15 years. Years and years of Liberal government, (and) things have gotten harder and harder.”

“Here’s what I want to say about the last five years: Sorry, not sorry. I’m really genuinely sorry that more people don’t like me, but I am not sorry about all the things that we’re doing in Ontario to make life better.”

“I’m not sorry that we’re making an economy that works for everyone, not just a few.”

“You [Howarth] would put Ontario permanently on strike, or you’d empty the public purse to pay off huge union demands. Why would you put public sector unions first, and the people of Ontario second?”

“Leadership is about finding the fairest way forward for the largest number of people. It’s not a slogan.”

“You [Ford] want people to believe that we sold Niagara Falls and we did not. Every dollar … is going to infrastructure.”

Leading up to the election, CARP surveyed the Progressive Conservative, Liberals, NDP and Green Party to find out where they stand on all the key election issues, such as hydro rates, homelessness, pension security and long-term care. Before you vote, click here for full results and make sure you know where each party stands.

Here are the official platforms for all parties: