Trudeau Fires Back on Trump Tariffs: You Tax Our Steel, We’ll Tax Your Bourbon 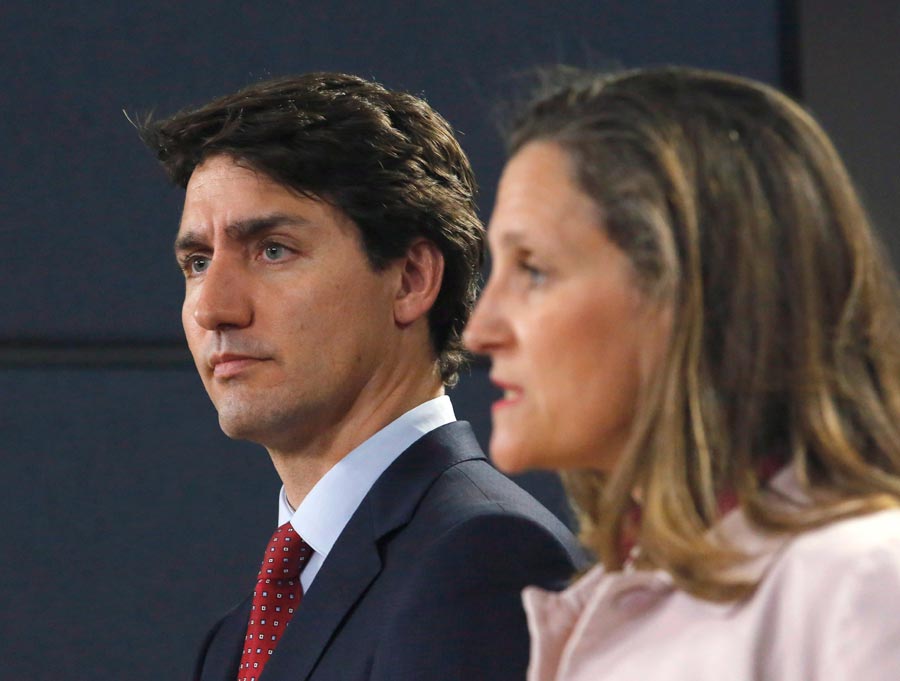 Prime Minister Justin Trudeau and Foreign Affairs Minister Chrystia Freeland speak at a press conference in Ottawa on Thursday, May 31, 2018. Canada is imposing dollar-for-dollar tariff "countermeasures" on up to $16.6 billion worth of U.S. imports in response to the American decision to make good on its threat of similar tariffs against Canadian-made steel and aluminum. THE CANADIAN PRESS/ Patrick Doyle

The first salvos in an increasingly belligerent trade war between Canada and the U.S. were fired yesterday as Prime Minister Justin Trudeau unleashed a series of counterattack measures against the U.S.

“Let me be clear,” the Prime Minister in a press conference in Ottawa on Thursday, “These tariffs are totally unacceptable.”

Describing the so-called Trump tariffs as “an affront to the long-standing security partnership” between the two countries, Trudeau and Foreign Affairs Minister Chrystia Freeland said that Canada intends to retaliate by imposing its own punitive import taxes.

The collective impact of these surtaxes add up to C$16.6 billion, a dollar-for-dollar retalitation that is meant to offset the amount the steel tariffs will hit Canadian metal industry.

“We have to believe at some point that common sense will prevail,” said Trudeau.

Unfortunately, there doesn’t seem to be anything close to common sense prevailing, not if you look at the list of products on the list subject to tariffs.

While Trudeau and Freeland should to be commended for responding to Trump’s bullying tactics – and for recognizing that a strong response was needed – items on the list of U.S. imports now subject to tariffs seem to range from the bizarre to the ridiculous.

As well as specialty iron and steel products, bourbon and Florida orange juice, U.S. imports that will be subject to tariffs include:

On the surface, while taxing these items may seem either provocative or unnecessarily petty, the list does effectively  illustrate the depth of trade between the two countries – Canada imports a multitude of U.S. products every year that have a direct impact on the economies of all 50 states.

Responding to U.S. frustrations that negotiations on putting a new North American Free Trade deal in place were dragging, Trudeau says he contacted Trump, offering to travel to the White House to help close the NAFTA deal.

However, that meeting was scuttled after the PM received a call from U.S. Vice President Mike Pence saying the only way the meeting could go ahead was if Canada would accept a “sunset clause” that would allow the U.S. to opt out of a new NAFTA deal after five years. Trudeau wouldn’t sign and the meeting never happened.

“For 150 years, Canada has been America’s most steadfast ally … From the beaches of Normandy to the mountains of Afghanistan, we have fought and died together,” Trudeau said. “We came to America’s aid after 9/11 … We are fighting together against Daesh [the Islamic State] in northern Iraq.”

The immediate result of the tariff dispute between the two old allies will make a lot of products more expensive to everyone in both countries.

Until a new NAFTA deal is resolved, the trade war is on: steel and aluminum versus bourbon, ketchup and ballpoint pens.

To quote the very wise words of Nebraska Senator Ben Sasse: “This is dumb.”