Simulation Suit Teaches The Young What Old Age Feels Like 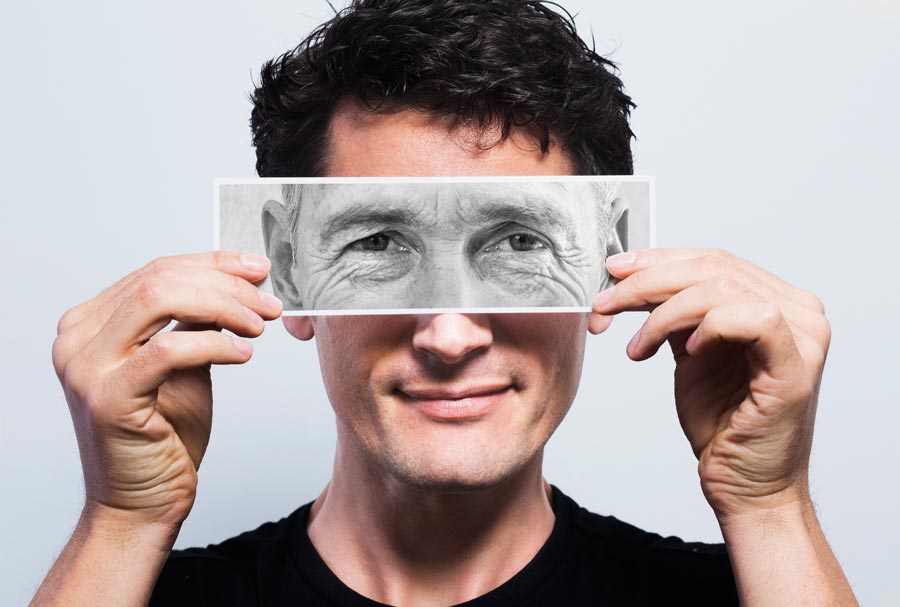 There are plenty of days where we think, “Man, I’m getting old,” but what does the aging body really feel like when it actually is older? Rebecca Field Jager suits up in a simulator to find out.

My limbs are heavy as I struggle to get out of bed. When I swing my legs over the side of the mattress, my feet hit the floor with a plunk as though I am wearing army boots and not socks. I stare down at my footwear not because there’s anything interesting about my plain white anklets but because my body is stooped and I can neither sit straight or fully look up. Within this limited field of vision, I manage to find my shoes and put them on, but the laces befuddle me. I get them tied, and slowly stand. Pitter-patter, let’s get at’er, I think. Only then do I realize that my world is yellow.

Getting old is for the birds, my mother likes to say and, while on most days these words fly out of her mouth with grace, sometimes like reluctant starlings forced from the nest, they falter and fall to the ground. On these latter occasions, I try to commiserate with a litany of my personal aging laments – Wrinkles! Weight! Sweet geezus, not batwings! Mom feigns sympathy but, of course, her sentiments ring as hollow as mine would if my own daughter ever dared to complain about being 30.

Like many boomers, I sometimes wonder what getting old will feel like but quickly push such thoughts from my head. And so when I recently had the opportunity to don an aging simulation suit (indeed, there is such a thing), I said yes with a mixture of curiosity and dread.

The pre-enactment, if you will, took place at Terraces of Baycrest, the retirement residence at Baycrest Health Sciences, a research and teaching hospital in Toronto. Lisa Sokoloff, the manager of training and simulation at its education centre, helped me get into the jumpsuit-style apparel and explained that she’d set up a “day-in-the-life” type scenario of the average elder. For 30 minutes, I would age about 30 years, she warned me, which would put me at 85. My birthday falls just before Mom’s, and for two days every year we are 30 years apart, so the number resonated.

The aging simulation suit is a training tool designed to help staff at facilities such as Baycrest develop empathy for the seniors in their care. And the same sort of suit is used by manufacturers such as Ford of Canada to help design vehicles with a better understanding of an older person’s challenges and needs. According to Stacey Haywood, a spokesperson for Spectrum Nasco, a provider of health-care simulation products, the suits Baycrest uses cost approximately $3,000 each. They are used in most colleges across Canada that offer Personal Support Worker (PSW) programs to help students understand the limitations of their future patients. As such, the suit comes with adjustable accessories – belts, buckles, braces and weights – that work together to simulate the physical and sensory changes associated with aging. For example, weights, fastened to the wrists and ankles, create the effects of decreased muscle strength and atrophy. Belts extending from the shoulders and buckled at the waist hunch the torso over replicating kyphosis, the curvature of the spine often caused by osteoporosis and arthritis. Braces restrict the range of motion of the elbows, knees and neck, mimicking the stiffening of joints that comes with decades of wear and tear.

And that’s the good part.

Once I had the suit on and it was all rigged up, Sokoloff handed me goggles, earplugs and gloves. It was the impairment of my senses of sight, sound and touch caused by these additions that got to me.

First off, the tinted goggles, which limited my peripheral vision, a consequence of aging, also made everything around me appear yellowish. Yellowing of the eye lens is an age-related condition that makes it tough to discriminate between shades of blue, green and violet. It makes it more difficult to distinguish colours – picking out clothes can be a problem – and often it’s harder to figure out where an object ends and its background begins. Curbs and steps then can be a hazard, and although my simulation took place indoors, I moved about cautiously so I wouldn’t trip over anything. When Sokoloff instructed me to sign a document, the words were fuzzy so I couldn’t read them. Play-acting to emulate someone with authority but little patience, she was insistent so, like many a senior in that position I’m sure, I signed it anyway.

Thanks to the earplugs, many of Sokoloff’s orders were muffled. Anyone who has ever had water in their ears will recognize that type of hearing loss but I was surprised to learn that as we age, hearing high-pitched sounds becomes more difficult. Aysha Bandali, a nurse practitioner at Baycrest, explained that because of this, often the elderly don’t recognize when your voice goes up and may not realize you’re asking them a question. If you say, for example, Okay, so we’re all set and ready to go? a senior may think you’re making a statement and have no clue you’re expecting an answer.

But the worst part for me was the gloves designed to reduce sensory input and the ability to grip, again, conditions of getting older. Think about all the things we do everyday that require dexterity and rely on our sense of feeling like buttoning up a sweater (you don’t have to look down). As we age, the nerves may conduct signals more slowly and restrict our ability to discriminate objects by touch alone. Bandali offers the example of a younger woman being able to find a key in her purse by simply fiddling around in there and “seeing” it with her fingers.

“An older person may have to empty the contents of her purse on the table so she can actually see the key,” Bandali explains.

And so it was that everything from getting dressed to getting out the door became a challenge. In addition, to simulate the decline in cognitive abilities some seniors experience, Sokoloff had set up a series of scenerios such as telling me to take my medication but with the location not disclosed to simulate memory loss. Flinging open kitchen drawers and searching in hard-to-reach cupboards was exasperating and I almost wept when I finally found the little bottle in the fridge. When I was directed to leave the apartment, I hadn’t been advised that the lock was tricky. Although obviously in my own mind I knew everything was fine, the fumbling and frustration left me panicky.
Of course, in real life, aging doesn’t happen overnight, and mercifully we get decades to adapt so I was anxious to share the experience with my mother and compare notes.

Off the bat, Mom pointed out that she felt lucky to have managed so far to escape some of the aging conditions I’d experienced – her hearing and eyesight are good; she uses a cane and sometimes a walker, but her posture is fine. But then, her voice grew wistful.

“I know I’m 86 but I don’t feel like a little old lady. I don’t think about the number. Instead, I try to keep busy with things like you kids and some of the stuff going on around here,” she said, referring to the senior residence in North Bay at which she lives. “And, you know, I always try to look nice because that makes me feel better. Even if I just go downstairs to get the mail, I get dolled up.”

I laugh when I hear this because it fills me with happiness to know that some things don’t change – I’ve never known my mother to leave the house without lipstick. I just have to remind myself the next time I’m impatiently holding her apartment door open as if a hallway gust might help to whisk us out, that the process of finding and applying her beloved Romantic Rose takes a little longer.