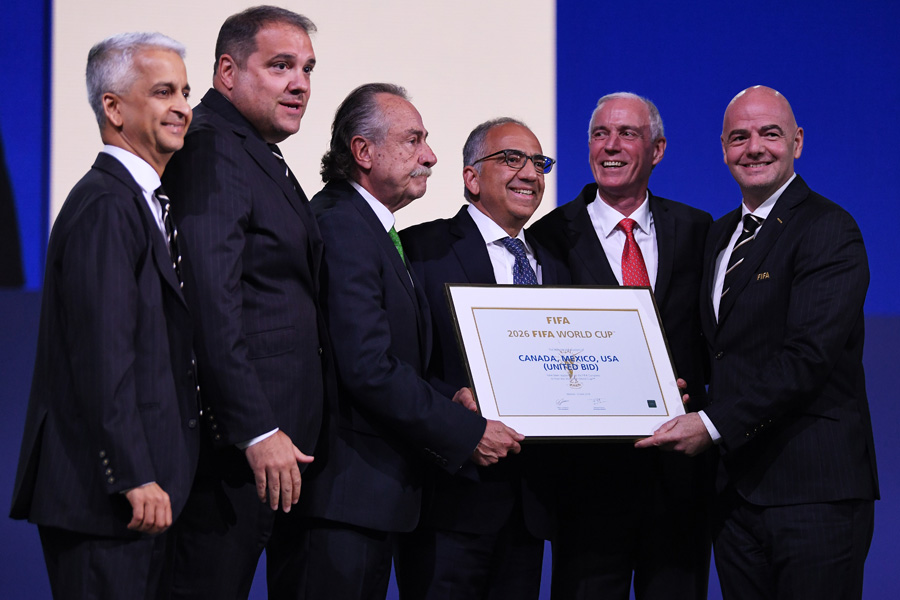 Soccer officials from Canada, the U.S. and Mexico celebrate after FIFA announced those countries had won the bid to host the 2026 World Cup. Photo: Mike Hewitt/FIFA/FIFA via Getty Images.

Canadian soccer fans are ecstatic today as FIFA, the sport’s governing body, announced that we won the bid to co-host the 2026 World Cup with the U.S. and Mexico.

The announcement was made in Moscow last night, just before the kick-off of the 2018 FIFA World Cup Russia, the tournament held every four years that crowns a global champion.

Kristy Duncan, Minister of of Science, Sport and Persons with Disabilities, tweeted the good news: “Hosting a FIFA World Cup is an extraordinary honor and privilege,” Steven Reed, President of Canada Soccer, said in a statement.

“Canada, Mexico, and the United States are ready to welcome the world to North America and serve as stewards of the largest FIFA World Cup in history. Our vision is of a world of opportunity for our Candidate host cities and for the global football community.”

Although details have not been released, it appears that Edmonton, Toronto and Montreal will play host to 10 games in the new round-robin round, the first time on Canadian soil.

It also means that Canada will gain automatic entry into the World Cup, a competition it hasn’t qualified for since 1986, when the heavily overmatched side lost all three games.

Obviously, we’re known more for hockey than soccer; Canada is currently ranked a lowly 79th in the world — behind such non-powerhouses as Syria, Lebanon, Mali and Guinea. But the sport has grown immensely in popularity over the last few years, encouraged by the success of MLS champion Toronto FC, as well as Vancouver Whitecaps FC and Montreal Impact.

But the possibility exists that young soccer-playing athletes of today — fuelled by chance to one day play for their country on home soil — could become the stars of 2026.