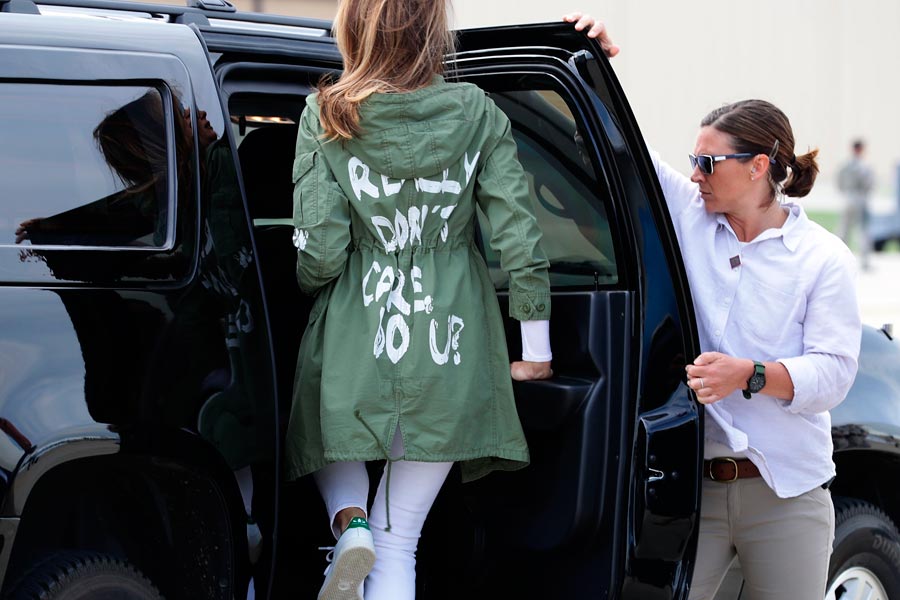 Are we really “reading” too much into Melania Trump’s Jacket?

Melania Trump’s unannounced visit to the detention centre for migrant children at the Texas-Mexico border made news long before she even arrived due to a questionable fashion statement.

While boarding an Air Force plane, media members snapped photos of her wearing a jacket with the words “I really don’t care, do u?” written in bold on the back.

Considering the recent controversy over the “zero tolerance” family separation policy that has seen children and even new-born babies taken from migrant families, the jacket was a poor choice.

But was the message intentional?

The administration’s camp seemed a little confused about the answer to that question.

When asked about the jacket, Trump’s spokesperson Stephanie Grisham said, “It’s a jacket, there was no hidden message. After today’s important visit to Texas, I hope this isn’t what the media is going to choose to focus on.”

President Trump, however, had a very different interpretation.

“I REALLY DON’T CARE, DO U?” written on the back of Melania’s jacket, refers to the Fake News Media,” he tweeted. “Melania has learned how dishonest they are, and she truly no longer cares!”

For what it’s worth, Grisham was right, the message wasn’t hidden. The bold letters on the jacket sums up her husband’s attitude toward the issue quite eloquently.

Leading up the the crisis, Trump claimed he only had two options in dealing with the separated families caused by the policy.

“We can either release all illegal immigrant families and minors who show up at the border from Central America or we can arrest the adults for the federal crime of illegal entry. Those are the only two options, totally open borders or criminal prosecution for law-breaking,” the President said in a statement.

As it turned out, that claim was the President’s attempt to remain steadfast on his immigration policies, which include the separation of parents and children apprehended at the border. A day later, facing extreme pressure from the media,  he signed an executive order to discontinue the practice.

He also refused to take any responsibility for the crisis, falsely blaming the Democratic members of Congress for the policy.

“Our immigration laws are the weakest and worst anywhere in the world, and the Dems will do anything not to change them & to obstruct-want open borders which means crime!” the President tweeted in response to criticism over his border policies.

After Melania visited the children at the detention centre in Texas she continued to pass the buck for her husband.

“Spending time with them reinforces the fact that these kids are in this situation as a direct result of adult actions,” the First Lady said in a statement. “It is my hope that Members of Congress will finally reach across the aisle and work together to solve this problem with common sense immigration reform that secures our borders and keeps families together.”

Jacket or no jacket, both Melania and Donald seem to “care” more about optics than the issue at hand.