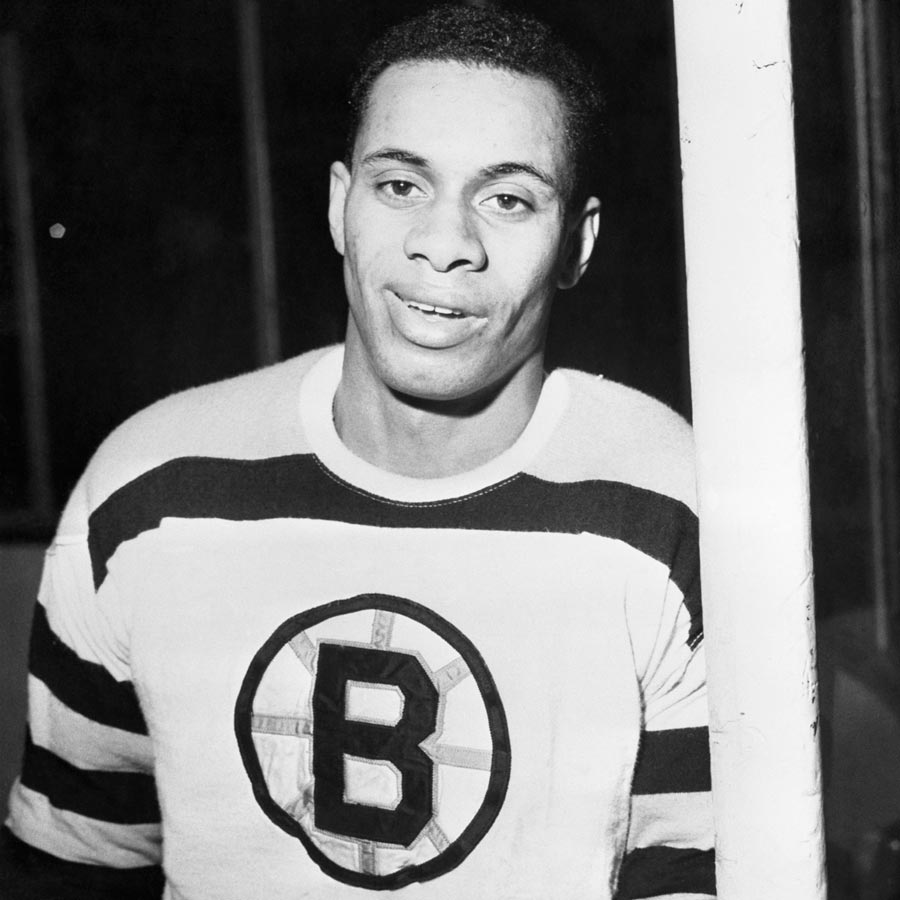 Willie O'Ree, the NHL's first black player, will be enshrined this year in the Hockey Hall of Fame (Getty Images)

This year, the Hockey Hall of Fame has chosen to honour not only the men and women who’ve won Stanley Cups or set world records but also to celebrate those who blazed a trail in the sport. Willie O’Ree
Topping the list of 2018 inductees is 82-year-old Willie O’Ree, who only played 45 games and scored four goals playing parts of two seasons for the Boston Bruins. So why is he going to the Hall of Fame? Because by taking the ice in his first game, on Jan. 18, 1958, the Fredericton, NB, native broke the colour barrier, becoming the first black man ever to play an NHL game. “I was laughing and I was crying,” O’Ree said, upon learning the news that he’d made the Hall of Fame. “I’m just so happy that I’m alive to be able to share this. There are not enough words to say how pleased I am.”

Jayna Hefford
Going into the HHOF alongside O’Ree will be Jayna Hefford, a 41-year-old women’s hockey scoring legend. A four-time Gold Medalist for Canada at the Olympics, the 41-year-old from Trenton, Ont., not only helped grow the women’s game but managed to score an astounding 439 goals in 418 competitive games. “I’m certainly proud and honoured to be inducted alongside these great men,” Hefford told the Canadian Press. “It’s quite a class.”

Alexander Yakushev
Russian hockey star Alexander Yakushev, who starred in the famous 1972 Summit Series against Canada, will also get his place in hockey’s shrine. Those who remember that series will grudingly admit that the now 71-year-old, who scored seven goals and four assists in the ’72 series, showed the hockey world that Russia could compete with the very best.

Gary Bettman
The most controversial choice of 2018, many fans are asking why the NHL commissioner should be elected to the Hall of Fame when he’s still working. However, the 66-year-old native of Queens, New York can be credited with growing the sport in the U.S., expanding to non-traditional hockey markets like Nashville, Columbus, Phoenix and North Carolina. Many fans, especially those here at home, despise Bettman, not only for moving franchises out of Canada, but for presiding over three labour lockouts, including the 2004-2005 season in which the entire season was cancelled.

Martin Brodeur
An outstanding goalie who played the bulk of his career in New Jersey, Brodeur is the NHL’s all-time leader in goaltender victories and shutouts, both records which could stand for a very long time. Despite the fact the 46-year-old Montreal native was a shoo-in for the Hall of Fame — the best goalie of his generation — he was still excited by the news. “You play your whole career and you don’t expect to get this phone call, but when it does, it definitely does feel pretty good.”

Martin St. Louis
The diminutive star, best known for leading the Tampa Bay Lightning to the Stanley Cup in the 2003-2004 season, St. Louis wasn’t even drafted. Yet, at five-feet, six inches, the Laval, Que., native willed himself to stardom, scoring over 1,000 points, winning the Hart Trophy (MVP) and playing for the Canadian Olympic goal-medal team that won gold in Socchi in 2014.