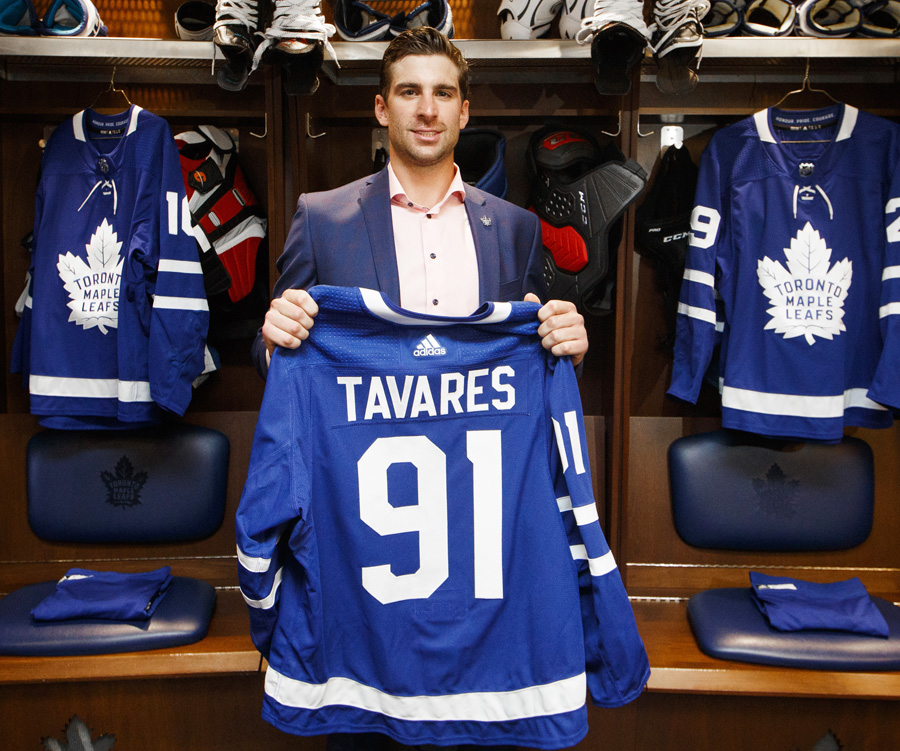 John Tavares holds his new #91 jersey after signing with the Toronto Maple Leafs. (Photo by Mark Blinch/NHLI via Getty Images)

The Toronto Maple Leafs signing of John Tavares this weekend has brought the team one step closer to ending 51 years of failure. At least that’s what fans in this Stanley-Cup starved city are telling themselves.

In signing Tavares, the Leafs are acquiring a stylish player who is regularly is among the top point producers. Not only does he have the skill and leadership qualities to help the young team, but as a high quality centre, he fills a void that’s absolutely necessary for playoff success.

While he’s become a star playing his entire career for the New York Islanders, the only thing missing from his resumé is playoff success. The Islanders, a small-market franchise, just couldn’t spend the money to surround him with any decent talent and playoff runs were rare.

Obviously, the opportunity to win was a major incentive in signing with Toronto. And the money the Leafs were offering didn’t hurt either — a seven-year, $77 million contract will set him up financially for life.

But there was more to this decision than just dollars and cents. The 27-year-old hails from Mississauga, Ont., a suburb of Toronto, which is located right in the heart of Leaf Nation. A lot of fans in the GTA will relate to this adorable twitter pic of a nine-year-old Tavares There’s little Johnnie with his Maple Leaf sheets and his dreams of lifting a Stanley Cup for his favourite team. Now he has the opportunity to live out those dreams. And judging from his comments to reporters, he understands better than anyone what the Leaf history of losing means to fans and will be extra motivated to put an end to it.

“I have memories from when I’m three years old, watching the Leafs with my dad on the couch, going to games at the Gardens, to some of the Leaf teams of the 90s and early 2000s. If you’re going to play hockey, I’m going to be a Maple Leaf.”

Playing for your childhood team is a double-edged sword. While it’s great to put on the jersey you’ve always dreamed of wearing, there’s also the added pressure of succeeding. In the past, some players have steered clear of becoming the focal point of fans’ and media expectations. If you succeed playing for your hometown, they’ll love you forever. But if you fail to deliver, the fans and media will turn on you venomously.

Vincent Lecavalier, a star player from Quebec, refused to sign with Montreal Canadiens because he couldn’t to bear the weight of playing in front of critical fans and media. And more recently, Steven Stamkos chose not to sign with the home-town Leafs, preferring instead to play away from the media glare in the relative anonymity of Tampa Bay.

Tavares obviously has the mental strength to succeed in Toronto, where hockey is a 24/7 obsession. He called his signing a “once in a lifetime” and “fulfill my dreams” – and win a championship for his childhood team.

And for a legion of fans who haven’t seen the team taste champagne from the Stanley Cup for 51 years, you can forgive them for dreaming just a bit as well.