Greektown Shooter Had “Psychosis and Depression” – And a Gun 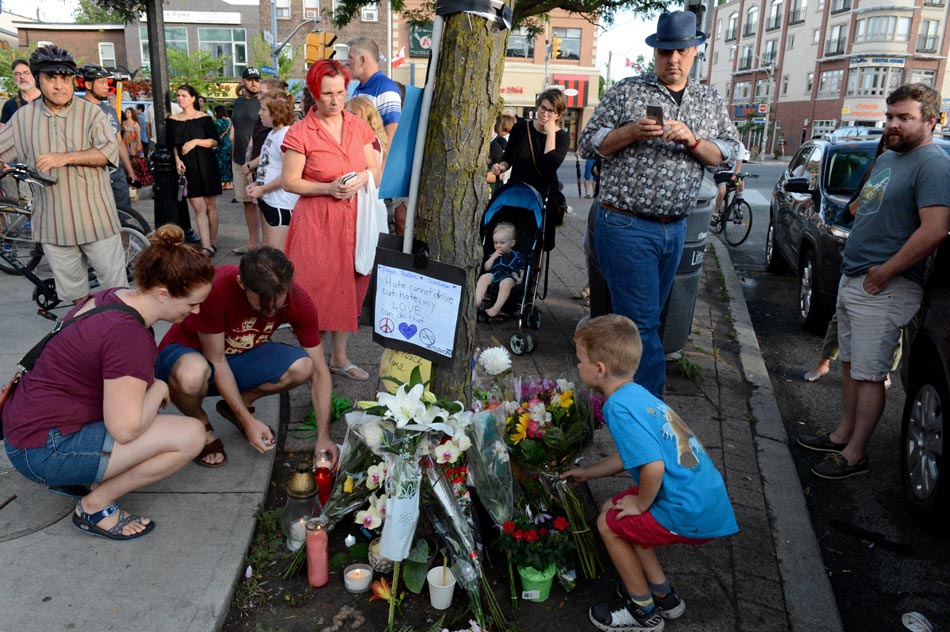 Residents of the Danforth area leave flowers and light candles for the victims at the scene of the July 22 shooting in Toronto, Ontario. Photo: Getty Images

Toronto police have identified Faisal Hussain as the suspected gunman in the Sunday shooting spree in Toronto’s Greektown area, which killed two and injured 13.

According to a statement released by Hussain’s family, their 29-year-old son “had severe mental health challenges” and he struggled with “psychosis and depression his entire life.”

“We are at a terrible loss for words but we must speak out to express our deepest condolences to the families who are now suffering on account of our son’s horrific actions.

We are utterly devastated by the incomprehensible news that our son was responsible for the senseless violence and loss of life that took place on the Danforth.

Our son had severe mental health challenges, struggling with psychosis and depression his entire life. The interventions of professionals were unsuccessful. Medications and therapy were unable to treat him. While we did our best to seek help for him throughout his life of struggle and pain, we could never imagine that this would be his devastating and destructive end.

Our hearts are in pieces for the victims and for our city as we all come to grips with this terrible tragedy. We will mourn those who were lost for the rest of our lives.”

While the family begged for understanding, it won’t bring back the lives of the two victims who died by his gun. The two who are being mourned by their families today are 18-year-old Reese Fallon, from Toronto’s east-end Beaches neighbourhood and a still unidentified 10-year-old girl.

One of Fallon’s sisters posted an Instagram a tribute to her beloved older sibling. “Today has been the hardest because I haven’t just lost a sister I’ve lost my lifelong best friend and anyone who knew us knew that when we were together we were inseparable.”

Most residents of the usually peaceful Danforth Ave. are at a loss to explain the violence.

Mayor John Tory asks: “Why does anyone in Toronto need a gun?”

While Canada prides itself on its strict gun laws, judging by the number of shooting deaths in Toronto this year, they’re not working. We’d look at our U.S. neighbours with a sense of superiority – our cities aren’t torn by violence.

But with over 23 shooting deaths in the city this year, we can no long make that claim. And it doesn’t seem the laws are stopping anyone from obtaining a firearm.

And if Mr. Faisal was clearly suffering from “psychosis and depression”, he certainly didn’t get his purchase his gun legally. So why does a person suffering from mental illness obtain a gun. To carry that thought to its inevitable conclusion, Mayor John Tory asked at a city council meeting on Monday: “Why does anyone in Toronto need a gun?”

Bill Blair, federal minister of border security and organized crime reduction tweeted that he called Premier Doug Ford, Toronto Police Chief Mark Saunders and Mayor Tory to discuss how we can support their efforts to end the violence. We stand united in our resolve to keep our streets safe.

But, with due respect to Minister Blair et al, this doesn’t seem to be a question of border security or organized crime reduction.

No amount of federal commissions, municipal studies or extra policing will stop an emotionally troubled loner from obtaining a gun, walking down the street late on a Sunday night and begin shooting helpless people enjoying the summer weather. Nor will it deter another from renting a van and mowing down pedestrians on a beautiful spring afternoon.

Something seems to be torn in the fabric of our society. And it’s unlikely that our politicians, police or bureaucrats can repair it.