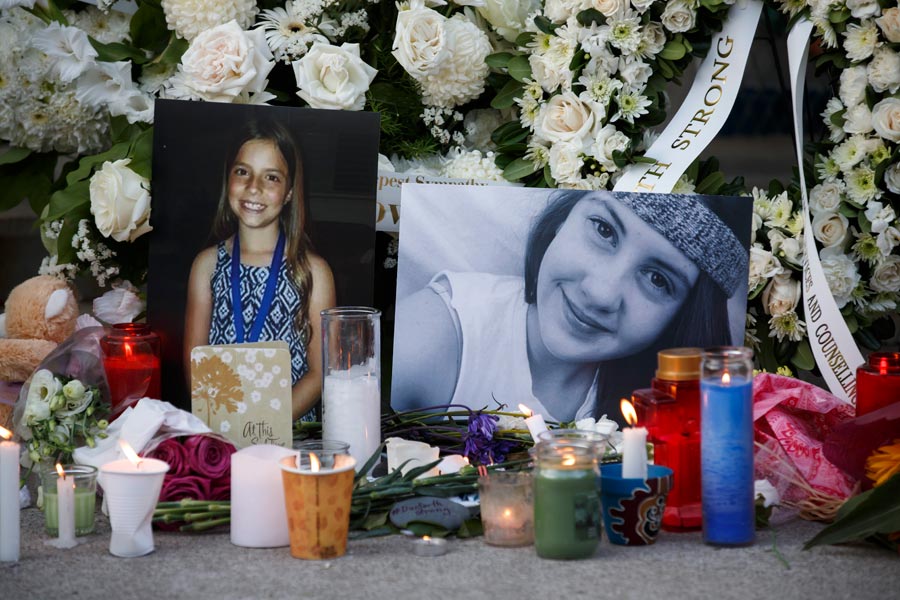 Thousands of mourners took to Danforth Ave. on Wednesday night, marching quietly down the street where Faisal Hussain’s horrifying shooting spree took place on Sunday, which killed two people and injured 13 others.

Toronto Mayor John Tory and Ontario Premier Doug Ford joined the procession that ended in Alexander the Great Parkette. The park — which is now overflowing with messages, teddy bears, flowers and votive candles — is one of the memorial sites along the Danforth that pays tribute to the shooting victims. A moment of silence was held for the two girls who died in the shooting: 18-year-old Reese Fallon of Toronto and 10-year-old Julianna Kozis of Markham, Ont. Members of Kozis’ swim team turned out, wearing the teams’ uniform and hugging and crying during a rendition of Leonard Cohen’s “Hallelujah.”

While the memorial was taking place, word broke that the terrorist group ISIS was claiming responsibility for the attack.

AMAQ, the news agency linked to ISIS, called Hussain a “a soldier of the Islamic State” who acted “in response to calls to target the citizens of the coalition countries.”

However, Toronto Police Chief Mark Saunders denies these claims, saying “we have no evidence” to support them. Experts also note that ISIS has begun claiming any violent action that occurs around the world, including the Las Vegas shooting last year.

“The probability has become much less certain about what a claim means at this point, because they may be monitoring the news and trying to latch onto whatever they can see,” CBC quoted Thomas Joscelyn, a counter-terrorism expert as saying.

CP24 is also reporting that, according to multiple sources, a police search of Hussain’s apartment revealed stashes of “ammunition and large capacity magazines.” And they also say that Hussain’s brother was connected to a seizure of guns in Pickering, Ont. last year.