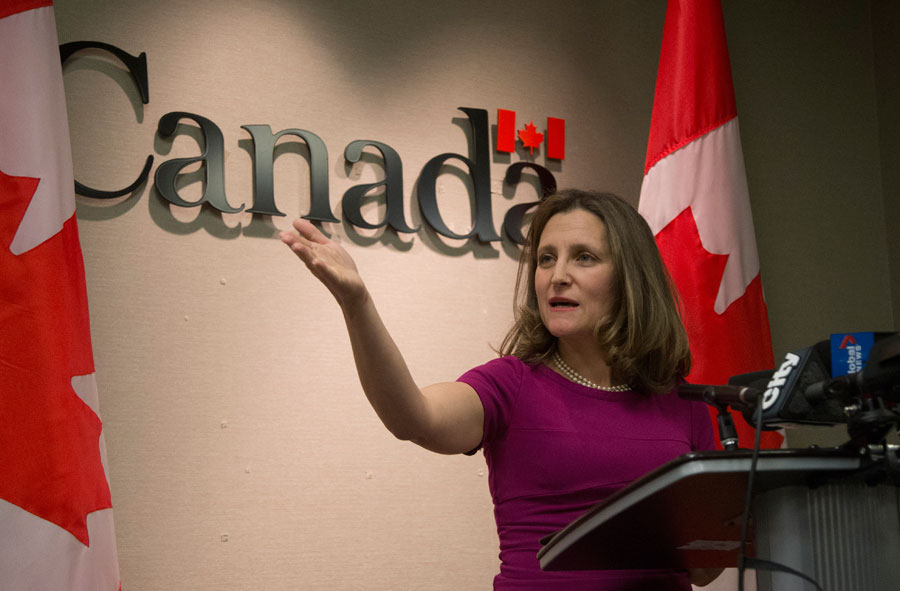 In the midst of an escalating diplomatic feud between Canada and Saudi Arabia, a Saudi youth organization by the name of Infographic KSA shared and later deleted an image on Twitter that appeared to show an Air Canada plane heading toward the CN Tower in Toronto, evoking memories of the 9/11 attacks in the U.S.

“As the Arabic saying goes: He who interferes with what doesn’t concern him finds what doesn’t please him,” reads the text superimposed on the photo. Above, another message highlighted in red reads, “sticking one’s nose where it doesn’t belong!”

The Tweet, which was posted on Monday, stems from an ongoing diplomatic battle over the Canadian government’s criticism of human-rights violations in Saudi Arabia, which began with a statement by Foreign Affairs Minister Chrystia Freeland and her department calling for the Saudi government to release a number of arrested civil-rights activists.

“Canada is gravely concerned about additional arrests of civil society and women’s rights activists in #SaudiArabia, including Samar Badawi,” the Tweet reads. “We urge the Saudi authorities to immediately release them and all other peaceful #humanrights activists.”

Samar Badawi, who the tweet mentions by name, is currently imprisoned in Saudi Arabia and has been sentenced to 1, 000 lashes for insulting Islam.

Saudi Arabia has since expelled Canada’s ambassador, recalled its own envoy and has frozen new trade deals with the country.

“KSA through its history has not and will not accept any form of interfering in the internal affairs of the Kingdom,” Saudi Arabia’s Foreign Ministry tweeted. “The KSA considers the Canadian position an attack on the KSA and requires a firm stance to deter who attempts to undermine the sovereignty of the KSA.”

In another statement, Saudi Arabia warned that any further criticism would give their government the right to meddle in Canadian affairs.

“Any further step from the Canadian side in that direction will be considered as acknowledgment of our right to interfere in Canadian domestic affairs,” the Foreign Ministry said. “Canada and all other nations need to know that they can’t claim to be more concerned than the kingdom over its own citizens.”

Inforgraphic KSA, later tweeted the image again with the plane removed and issued an apology for the initial tweet, which sparked public concern from social media members over it’s imagery.The organization, which is described as a non-profit project on it’s website, claimed the plane was meant to symbolize the return of the expelled ambassador to Canada.“Earlier we posted an image which was inappropriate, which is why we deleted the post immediately,” read the tweet from the organization’s account. “The aircraft was intended to symbolize the return of the Ambassador, we realize this was not clear and any other meaning was unintentional. We apologize to anyone who was offended.”

The Saudi Ministry of Media has since announced that they have ordered the organization to shut down the Twitter account “until investigations are completed according to electronic broadcasting laws in KSA.”

A spokeswoman for Ms. Freeland said late Sunday that the Canadian government would continue to stand against human right’s violations in the wake of the Saudi government’s statements and actions.

“We are seriously concerned by these media reports and are seeking greater clarity on the recent statement from the Kingdom of Saudi Arabia,” Marie-Pier Baril said. “Canada will always stand up for the protection of human rights, including women’s rights, and freedom of expression around the world. Our government will never hesitate to promote these values and believes that this dialogue is critical to international diplomacy.”