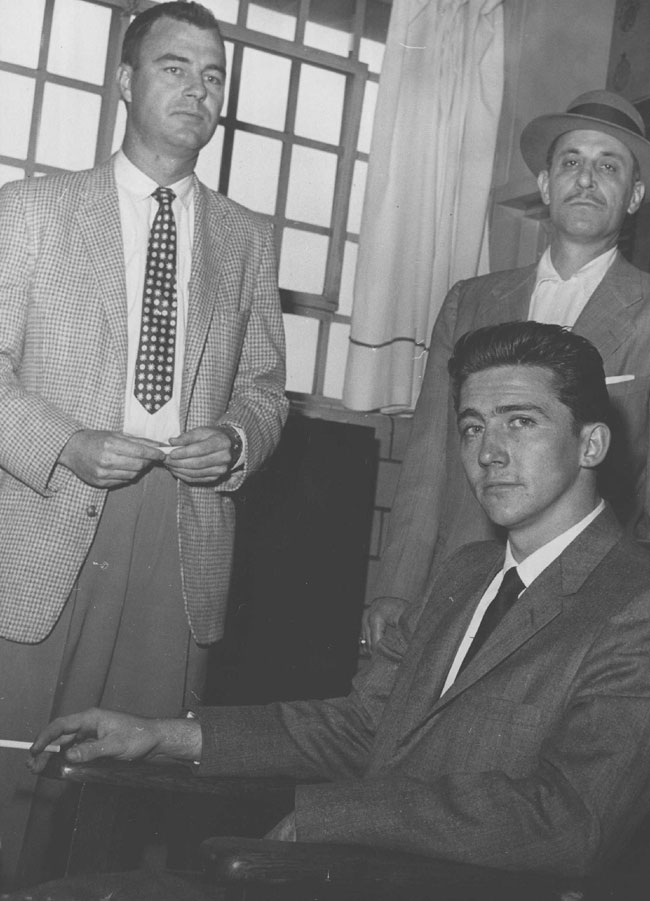 Boyne Lester Johnston sits in the office of the Denver jail building after telling of his 1958 Canadian bank theft and the spending spree that followed. Standing behind his chair are Denver Detectives Clyde Villano (left) and Joe Talty. (Photo: Denver Post/Getty Images)

For 85-year-old Boyne Johnston, a lunch at Ottawa’s swanky Riviera restaurant downtown was to return to the scene of the crime.

Six decades before, the building was the Ottawa Branch of the Imperial Bank of Canada where, as an employee, Renfrew. Ont. native Johnston pulled off the largest bank robbery in the capital’s history.

Alex McMahon, Riviera’s wine director, told the CBC that Johnston had become “a great little legend” for the restaurant, but admitted that most of the staff had no idea he was still alive.

“A reservation popped up and in the notes, the guy had said, ‘I’m bringing my friend back to the bank that he robbed,'” McMahon recalled to the CBC. According to newspaper reports from the time, Johnston, a chief teller at the branch, walked out of the office on a Friday afternoon with more than $260,000 (the equivalent of more than 2.2 million dollars today).

He then spent 17 days on the Iam, living a lavish life and spending as much of the illicit cash as possible. Wanted posters that were issued after the robbery described Johnston as a “night club habitué” and “champagne drinker” who “enjoys female companionship.”

Although McMahon was the one showing Johnston around the downtown restaurant, it was the former bank robber who provided the history lesson.

“He [took] us through where everything was when it was the bank, and how he did it, how he pulled off the robbery,” McMahon told CBC. Johnston even got the chance to enjoy a glass of champagne in the wine cellar of the restaurant, which was once the safe he emptied as an employee years ago.

As it turns out, Johnston’s taste for champagne and extravagance was part of the problem.

His expensive habits, which included splurging on bottles of champagne at local night clubs, first caught up with him him in 1957, when he found himself unable to pay his rent and decided to use funds from the bank to cover the shortfall.

On the day of the robbery, he emptied the vault reserves in two canvas bags and stashed them in a storage closet. Later, he made a huge production of having to head back to Renfrew for the weekend, quickly closing the vault before the routine count of the bank’s funds could be made.

Johnston returned later that evening for the cash and headed first to Los Angeles and then to Twin Falls, Idaho. In his 17 days on the Iam, he bought a Zenith transoceanic radio for $150 and sapphire ring before making his largest purchase — a 1959 Corvette, which he used to tour the western U.S.

Though, true to form, his downfall was his predisposition for champagne and female companionship. He was arrested in the washroom of a nightclub in Denver, where he had been enjoying some bubbly with two female patrons.

Johnston would go on to serve four years in prison in the now-shuttered Kingston Penitentiary. After his release, he landed a job as an accountant and says he hasn’t stolen anything since.

As for any regrets he has, Johnston says the ordeal of prison taught him a necessary and valuable lesson.

“I’d do it all over again, but only for one reason,” Johnston told CBC. “Nobody understands until your freedom is taken away what your freedom is. I have such great appreciation for life today.”