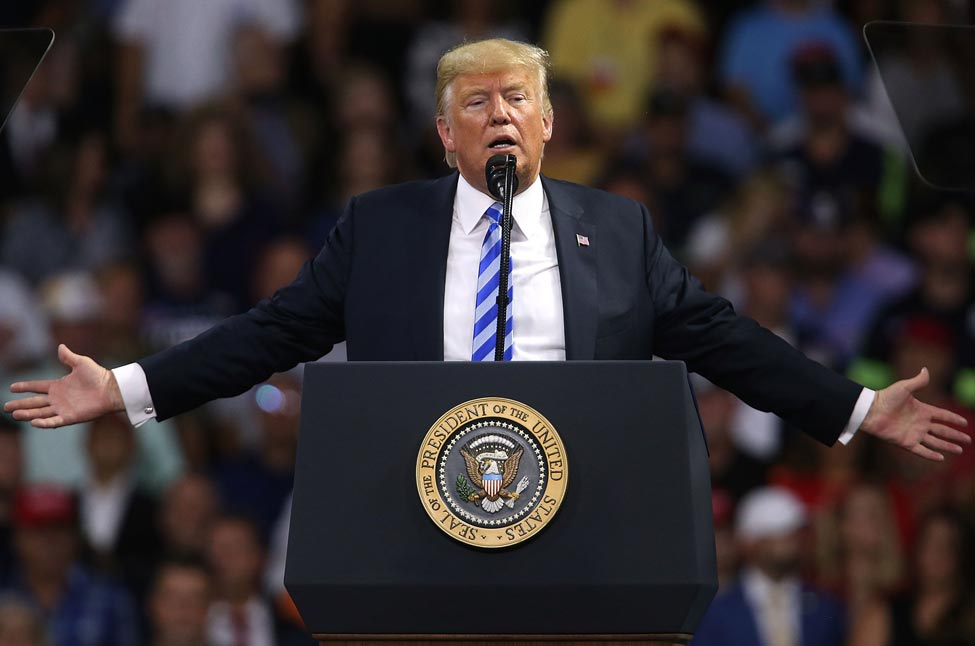 The walls are closing in on U.S. President Donald Trump as, one by one, his former associates find themselves in deep legal trouble regarding illegal actions made before and during the 2016 election campaign.

With guilty verdicts starting to come out of Special Counsel Robert Mueller’s investigation in Russia and an extraordinarily damning statement from Michael Cohen at his trial on Tuesday, this administration is under increasing challenge on every legal front imaginable.

But on Tuesday night, the president didn’t even mention his growing legal woes at a MAGA rally in Charleston, West Virginia. Instead, he rolled another of his now familiar incoherent rants about the 300 per cent tariffs Canada places on dairy products imported from the U.S. “It’s called an economic wall. I don’t want that. I said ‘Justin, I mean, I don’t want to have too much fun with you Justin, but you can’t do that.’ Justin Trudeau, nice guy. But they’ve taken advantage of us for so long.”

Although he didn’t show it at the rally, Trump must be deeply worried about his legal future. First, Mueller’s investigation found former Trump campaign chairman Paul Manafort guilty on eight counts of financial fraud.

More damning, though, was what happened yesterday in a Manhattan courtroom when Michael Cohen, Trump’s former lawyer and political fixer, pleading guilty to campaign finance violations, tax evasion and fraud.

It was Cohen’s incendiary statement in court that many feel could be the beginning of the end Trump’s troubled presidency. Cohen admitted that “a candidate for federal office” had instructed him to pay hush money to two women so that they wouldn’t speak publicly about their affairs that might ruin Trump’s presidential bid. Cohen claims he paid $130,000 in hush money and was then reimbursed by Trump. Prosecutors are arguing that this payment violates campaign finance laws.

“I participated in this conduct, which on my part took place in Manhattan, for the principal purpose of influencing the election,” Cohen said. In pleading guilty, Cohen is cutting a deal with prosecutors: in exchange for testimony, he will receive lighter sentencing — instead of a maximum 65 years, the prosecutors have agreed to a maximum of 63 months.

In a statement after Cohen’s bombshell, Trump lawyer Rudolph Giuliani said, “There is no allegation of any wrongdoing against the president in the government’s charges against Mr. Cohen.”

Despite this one-two punch of bad news on the legal front, the president remains boldly defiant, as ever. Trump posted on Twitter that he felt, “very badly for Paul Manafort” who, “unlike Michael Cohen, he refused to “break” — make up stories in order to get a “deal.” Such respect for a brave man!”