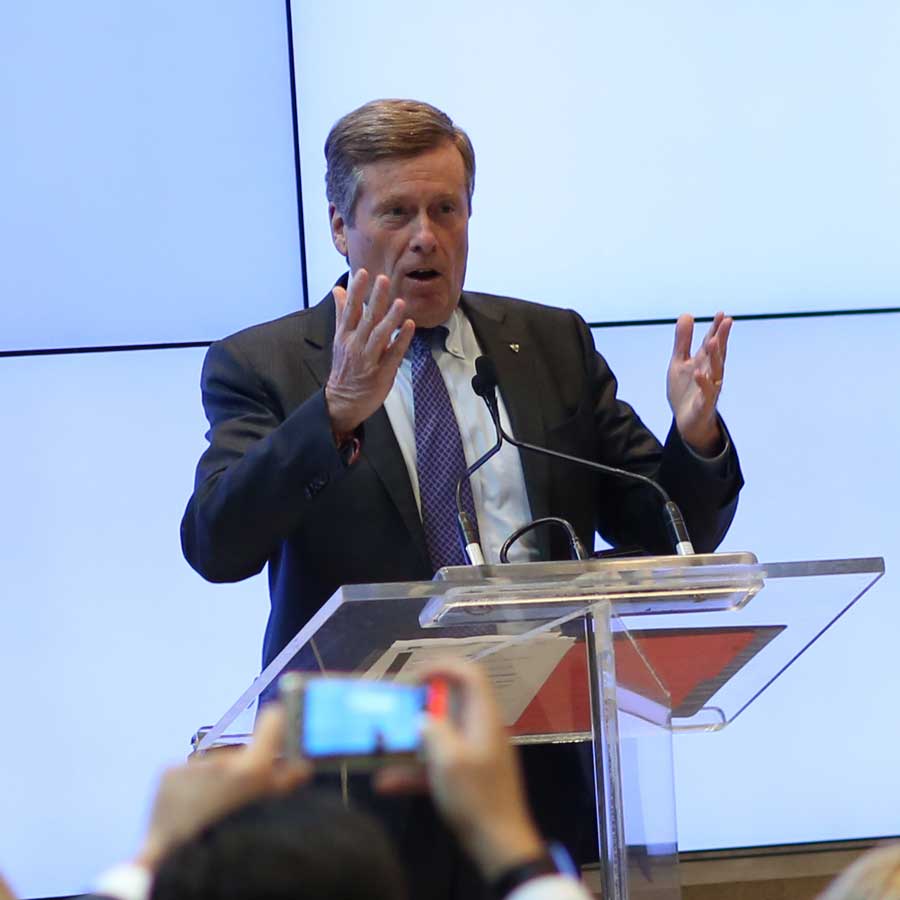 A new high-dose flu shot specifically designed for people 65 and older was introduced to a large audience at Toronto’s Richmond-Adelaide Centre on National Seniors Day (Oct. 1) as part of an influenza education campaign organized by CARP and Sanofi Pasteur Inc, the manufacturer of the new shot.

The shot, called Fluzone High-Dose, which will be provided to Ontario residents free of charge, contains four times the amount of antigen (the component that prompts the creation of antibody) contained in the regular flu shot. The additional antigen in the vaccine is intended to create a stronger immune response in seniors.

Human immune defences become weaker with age, which places older people at a higher risk of severe illness from influenza.

Mayor Tory, who spoke at the event, offered a personal anecdote about his 86-year-old mother, who contracted the flu and experienced further health complications as a result.

“She had what seemed like a simple cold and before you knew it, it evolved into pneumonia,” Tory said. “We’ve all seen instances where very healthy fit active older people have worse consequences as a result of the flu.”

Tory also took the time to thank Zoomer Media Founder and CARP president Moses Znaimer, who was in attendance at the event.

“I’m glad to be in the presence of Moses Znaimer, who was a pioneer in broadcasting and a pioneer as well in recognizing and in making sure that the proper advocacy was exercised on behalf of senior communities,” Tory said.

Elliott thanked seniors for their positive impact on Ontario and highlighted the importance of initiatives like the flu shot campaign.

“A great deal of the reason why our province is such a great place is because of the contributions our seniors have made over a number of years,” Elliott told the audience. “But it’s not just about saying thank you. It’s about helping them enjoy their senior years. An important way to help seniors live strong and healthy is [to provide] free access to the flu shot.”

The tailor-made vaccine has been available in the United States for a number of years and has seen success.

A study published in the New England Journal of Medicine found that Fluzone High-Dose vaccine was 24.2 per cent more effective in preventing flu in adults 65 years of age and older compared to the standard dose.

Another study published in The Lancet Respiratory Medicine also reported that the high-dose shot was associated with a lower risk of hospitalization compared to the standard dose.

The same adverse effects that some experience after a flu shot—which include pain and redness at the injection site, headaches, muscle aches, and malaise— were reported more frequently with the high dose vaccination, but are described as mild and temporary.

However, Fluzone High-Dose is not recommended for those who have had a severe reaction to the flu vaccine in the past.