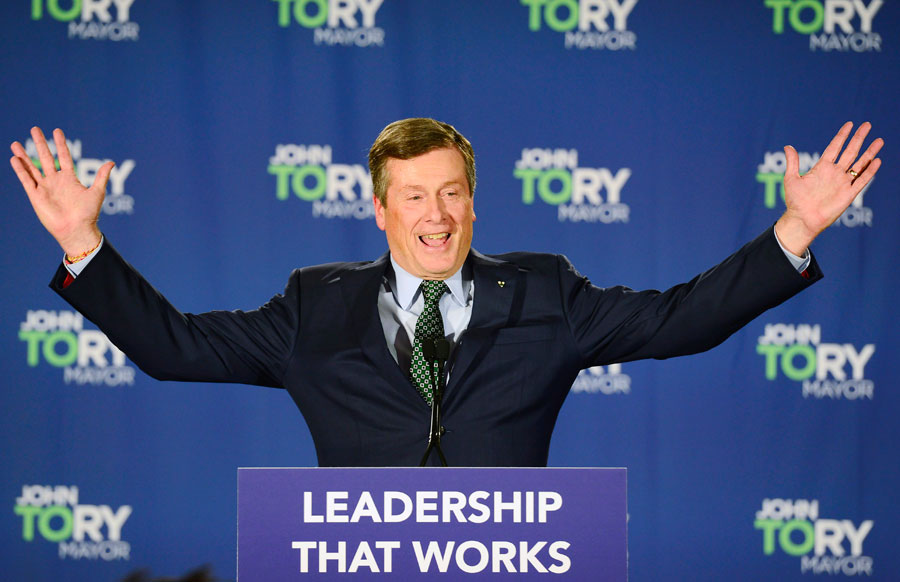 In a landslide election last night that surprised absolutely no one, Toronto voters overwhelmingly voted John Tory in for his second term as mayor. While the 64-year-old Tory’s “bland, boring, timid” campaign  decisively returned him to the seat of power in Canada’s largest city, many feel he’ll have to change his low-key tactics if he’s going to deal with the big, bad, bulldozing premier of Ontario.

“Things are better, things are improving, but there is much, much more to do on transit, on affordable housing, on access to opportunity, on building up and in some cases restoring trust that has been lost,” said Tory, in his victory speech.

Yes, improving transit and reducing crime will be important issues, but Tory must face down Doug Ford (who lost to Tory in 2014). Ford has made it clear he wants the province to exert greater control over Toronto by uploading services to the province, including the subway. How well Tory fends off this takeover bid from Ford will largely determine his legacy as mayor.

Ford congratulated all those who ran for office, (including his nephew Michael, who won a council seat in Etobicoke North) but didn’t make specific mention of Tory.

While Tory was celebrating in Toronto, Patrick Brown, the deposed leader of the Progressive Conservative Party of Ontario, completed his surprisingly quick political comeback last night in Brampton by winning the mayoralty race. Brown’s political career was thrown off the rails when he was forced to resign his position as PC leader in January (a position subsequently filled by Doug Ford) as a result of unfounded accusations of sexual misconduct.