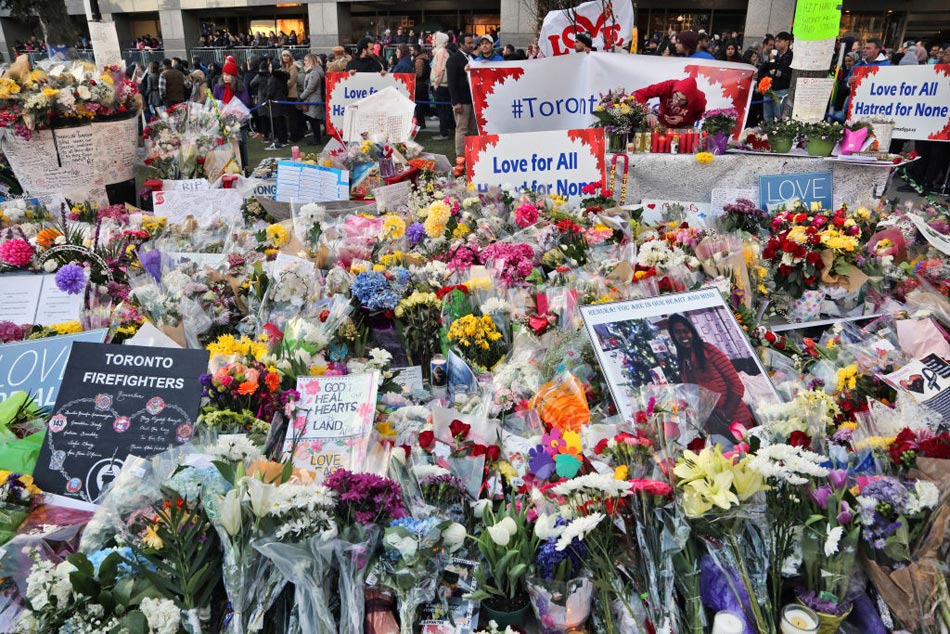 Flowers and messages at a memorial during an inter-faith vigil at Nathan Phillips Square in memory of the 10 people killed and 15 people injured in a deadly van attack in Toronto, Ontario, Canada, on 29 April 2018. Alek Minassian is identified as the driver who ran down a number of pedestrians. (Photo by Creative Touch Imaging Ltd./NurPhoto via Getty Images)

The case of a man accused of killing 10 people in a van attack in Toronto will forgo a preliminary hearing and head straight to trial.

The accused, Alek Minassian, 25, of Richmond Hill, Ont., has been charged with 10 counts of first-degree murder and 16 of attempted murder after he allegedly drove a white rental van onto a crowded sidewalk along Yonge St.  in north Toronto on April 23.

Minassian was arrested by Toronto police just minutes after the attack. In a video of the arrest filmed by a passerby, Minassian repeatedly pulls his cell phone from his pocket, as if it’s a gun, as he urges the arresting officer to shoot him.

Police have previously said they haven’t identified a motive for the attack and have said the evidence they collected didn’t warrant terrorism charges.

A Facebook post from Minassian’s now deleted account made reference to incel, a term used by some groups to mean “involuntarily celibate.” In the same post he hails Elliot Rodger, a 22-year-old California man who was responsible for a rampage in Isla Vista, Calif. that left six people dead and a dozen wounded, as “the Supreme Gentlemen.”

“The Incel Rebellion has already begun! We will overthrow all the Chads and Stacys! All hail the Supreme Gentleman Elliot Rodger!”

The post uses the same terminology as Rodger did in a video he posted ahead of his 2014 attack, where he raged about women turning down his advances, rendering men like him “incels.” He also referred to men who had success with women as “Chads” and women who turned men like him down as “Stacys.”

Minassian’s lawyer, Boris Bytensky, told CBC it was too early to reveal his client’s plea and said that the decision to move straight to trial had been in the works for months. He also said it could be 10 to 18 months before the trial begins due to the large amount of evidence to review, including witnesses accounts and surveillance video.

As for whether his client will undergo a mental health assessment, Bytensky seemed to suggest it was a possibility.

“We’ll take whatever steps are necessary in that regard,” he told CBC.

Pre-trial proceedings are expected to resume in December.

Is Misogyny to Blame for Toronto Attack?