U.S. “Puts Politics Aside” to Honour George H.W. Bush’s Life of Service, and Mulroney Eulogizes his Partner in Geo-Politics 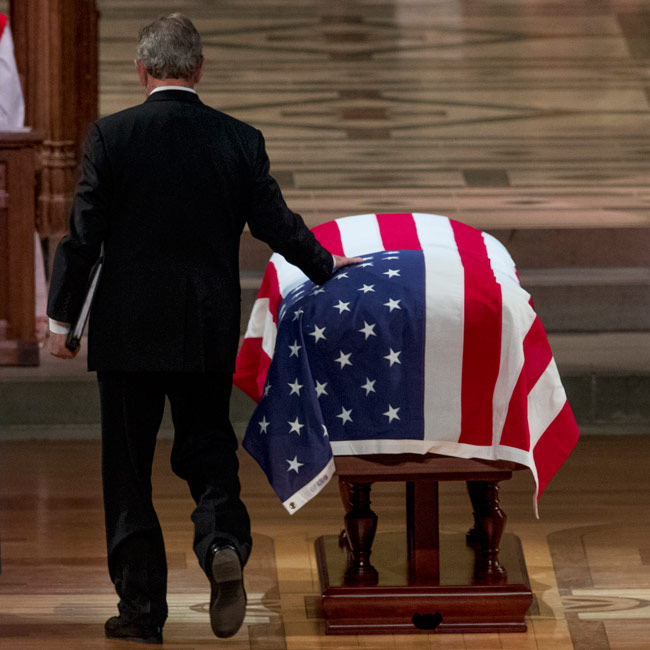 As a military band played “Hail to the Chief” one last time, the casket of former U.S. President George H.W. Bush was carried by an honour guard into a jam-packed Washington National Cathedral for the state funeral of the 41st Commander-in-Chief on Wednesday.

In the front row of the cathedral, paying their last respects, was current U.S. President Donald Trump and wife Melania, along with all living former presidents and their spouses: Barack and Michelle Obama, Bill and Hillary Clinton and Jimmy and Rosalyn Carter.

While Trump has been highly critical of the politics of the Bush family in the past, H.W. made it known before he died that he didn’t want anyone excluded from his funeral. In an interview before the funeral, George P. Bush noted that his grandfather wanted the funeral to be an opportunity to “put politics aside and focus on the greatness of our country and devotion to causes greater than ourselves.”

As the bells tolled, George W. and wife Laura led the Bush family up the main aisle, stopping at the front to shake hands with the “presidents club.”

Also on hand was a gathering of world leaders, including Prince Charles, King Abdullah II and Queen Rania of Jordan, German Chancellor Angela Merkel and Polish President Andrzej Duda, among others.

With the flag-draped casket on the altar, Lauren Bush Lauren and Ashley Walker Bush read scripture passages, followed by an address by presidential historian and Bush biographer John Meacham, who recalled how Bush — “America’s last great soldier/statesman” — spent his whole life in service to “causes greater than himself.” He was, said Meacham, “a loving man, with a big, enveloping, loving heart.”

Canada’s representative, Brian Mulroney, also spoke at the funeral for his close friend and political ally. During his eulogy, the former Canadian Prime Minister, who also spoke at Ronald Reagan’s funeral in 2004, spoke “about the courageous generation of young Americans” who brought “new strength and glory to the U.S.”

Listing Bush’s accomplishments, Mulroney focused on his “deft” handling of the downfall of the Soviet Union and the collapse of the Berlin Wall — epochal events of the 20th century. Quoting former German Chancellor Helmut Kohl, Mulroney said it could never have succeeded without the “brilliant leadership of President Bush.”

Any politician who had any dealings with Bush, said an emotional Mulroney, “knew they were dealing with a leader who was distinguished, resolute and brave.”

Before saying a final goodbye to his friend, Mulroney closed with an Irish proverb: “There are good ships, and there are wood ships, and ships that sail the sea. But the best ships are friendships and may they always be.”

Alan Simpson, former U.S. Senator, remembered that during his long friendship and service with Bush he was a man who “never lost his sense of humour” and that “you always wanted him on your side.”

George W. Bush, who carried on the family’s political dynasty as the 43rd president, wrapped up the funeral with a talk on how his father embraced “the gift of life” even in old age: “He taught us how to grow with dignity, humility and kindness.

“He was an empathetic man who valued character over pedigree,” he continued. “He taught us that public service is noble and necessary. He strongly believed it was important to give back to the community and country in which he lived … He was born with two settings: full throttle and then sleep … We tested his patience — I know I did — but he always responded with the great gift of unconditional love … The last words he would ever say on earth were ‘I love you, too.’

“To us, his was the brightest of a thousand points of light.”

The younger Bush then broke down, saying that now “Dad is hugging Robin and holding Mom’s hand again.”