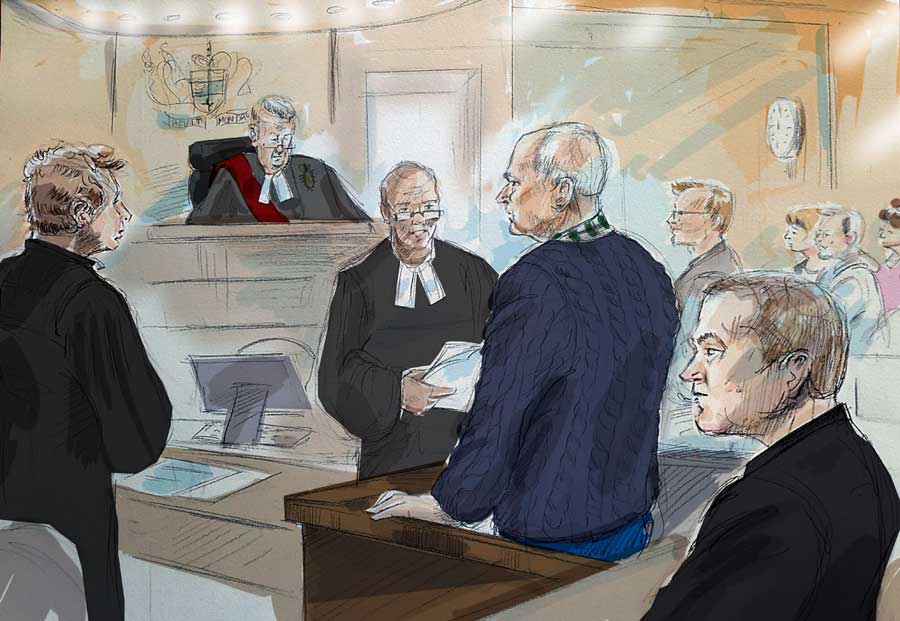 As Bruce McArthur’s sentencing hearing began on Monday those attending were warned of the gruesome details they would be exposed to.

Over the next three days, the court will hear victim impact statements and more details on the eight murders Bruce McArthur has plead guilty to.

“Think carefully about your need to be here,” Crown Lawyer Michael Cantlon urged after warning those in attendance of the explicit details they would hear.

The former self-employed landscaper was arrested at his apartment in January 2018 and was charged in the deaths of Selim Esen, 44; Andrew Kinsman, 49; Majeed Kayhan, 58; Soroush Mahmudi, 50; Skandaraj Navaratnam, 40; Abdulbasir Faizi, 42; Kirushnakumar Kanagaratnam, 37 and Dean Lisowick, 47. The murders took place between 2010 and 2017.

The dismembered remains of the eight men — all of whom had ties to Toronto’s Gay Village — were found in backyard planters of a home on Mallory Crescent where McArthur frequently worked.

A statement of facts released last week showed that six of the eight killings were sexual in nature.

On Monday morning the agreed statement of facts revealed that McArthur had premeditated plans to murder each man.

Reading the statement, Cantlon detailed the account of what police uncovered during their investigation of McArthur, revealing that police found most of the murders had been facilitated under the pretext of sex.

He also said that evidence indicated McArthur had restrained and sexually assaulted his victims and would frequently pose and photograph them after he had killed them. Cantlon told the court that six of the eight victims were staged and photographed, typically with ropes around their necks, some with signs of strangulation.

Reporters from inside the courtroom say that Cantlon’s voice began to break as he read the names of the victims.

Cantlon said that McArthur’s decision to waive a preliminary hearing suggested “some remorse” and that his assistance helped to resolve the case quickly.

It was also revealed that McArthur had taken a number of souvenirs from his victims, including a bracelet from Nevaratnam and bags of hair he had removed from his victims.

Cantlon also said that the photos were recovered through forensic analysis after McArthur had tried to delete them.

More information also came to light about McArthur’s arrest for assault back in 2016. The statement of facts revealed that he had not been charged for the incident, which Cantlon described as an “attempted choking.”

Cantlon said a man who had known McArthur for years was laid down on a fur coat in the back of McArthur’s van when McArthur began choking him. After escaping the man called 911.

After his arrest, McArthur told police that the incident was consensual. The police deemed his story credible and released him.

The 2016 incident, which was likely an attempted murder, may be connected to the case of Paul Gauthier, a Toronto police officer who is set to appear before a tribunal on Tuesday for misconduct in connection with the McArthur case. According to his lawyer he faces charges of insubordination and neglect of duty under the Police Services Act.