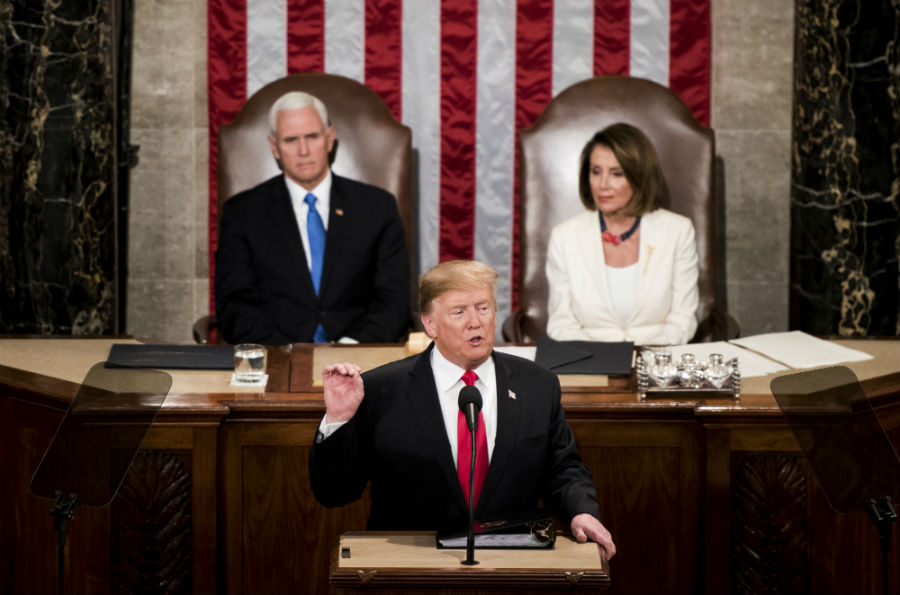 President Donald Trump delivers his State of the Union Address to a joint session of Congress in the Capitol on Tuesday, Feb. 5, 2019, as Vice President Mike Pence and Speaker of the House Nancy Pelosi, D-Calif., listen. (Photo By Bill Clark/CQ Roll Call)

The most divisive and disruptive President in the history of the United States used his State of the Union address last night to call for unity and collaboration.

In staking out his political agenda for the upcoming year, President Donald Trump asked Congress to “reject the politics of revenge, resistance and retribution, and embrace the boundless potential of cooperation, compromise and the common good.”

In a speech that dragged on for 82 minutes (the longest since Bill Clinton’s 89-minute SOTU address in 2000), the President said, “Together, we can break decades of political stalemate. We can bridge old divisions, heal old wounds, build new coalitions, forge new solutions and unlock the extraordinary promise of America’s future. The decision is ours to make.”

Trump went on at length about the importance of building the wall between Mexico and the U.S., which House Speaker Nancy Pelosi later deemed as “fear-mongering and manufacturing a crisis at the border.”

He spoke of the gains made by women in the workforce. This produced a burst of cheers from the women in Congress, many on the Democrat side, who wore white in respect to the suffragette movement. The applause prompted Trump to quip: “You weren’t supposed to do that.”

One thing Pelosi was supposed to do was introduce the President before the SOTU. However, whether it was another snub to the House Speaker or the President was just raring to go, Trump blew off the traditional introduction and started right in on his talk. During the SOTU, Trump also gave a dig to the Mueller Russian probe, saying that “an economic miracle is taking place in the United States and the only thing that can stop it are foolish wars, politics or ridiculous partisan investigations. If there is going to be peace in legislation, there cannot be war and investigation. It just does not work that way.”

In a CBS poll taken after the speech, the majority of Americans who responded approved of what the President was saying. But the Congressional Democrats in the House were not as impressed. Speaker Pelosi could barely contain her derision, frequently rolling her eyes and theatrically grimacing at Trump’s statements. And, at the end of the speech, stood up and appeared to be mockingly applauding the President. And Democrat media darling Alexandria Ocasio-Cortez tweeted that the U.S. is “flying without a pilot” and that “the president failed to offer any plan, any vision at all, for our future.” It seems that very few politicians on the Democrat side of the House are prepared to heed Trump’s calls for cooperation and compromise.