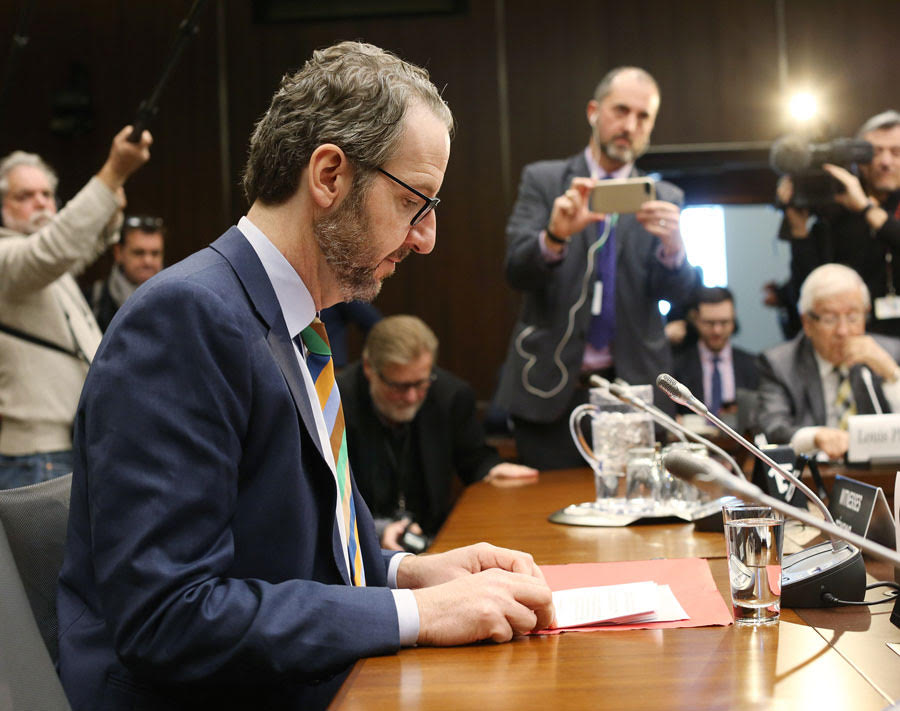 In a 30-minute opening statement and in questioning afterward, a calm and collected Butts downplayed and refuted Jody Wilson-Raybould’s testimony that she had been pressured by the Prime Minister, his staff and members of the government to secure a Deferred Prosecution Agreement (DPA) for embattled engineering firm SNC-Lavalin.

Repeatedly saying that “I have a very different version of events,” Butts, who resigned in February after the scandal blew up, denied that anything undue or illegal occurred and suggested the Wilson-Raybould’s testimony was simply due to the fact that “two people can experience the same event differently.”

Butts contended that Wilson-Raybould had not communicated that she had made a final decision on the SNC-Lavalin affair and that he was of the understanding that there was still time to provide extra information to help inform her decision. He also suggested that “20 points of contact” [meetings, texts and emails] between the former attorney general and members of the PMO does not constitute pressure.

“What exactly constitutes pressure?” Butts asked. He suggested that what Wilson-Raybould misconstrued as “veiled threats” and “pressure” was actually an attempt to offer new information that might assist her to reconsider her decision not to secure a DPA for SNC-Lavalin. Butts further stated that the Prime Minister and his staff only wanted Wilson-Raybould to accept outside legal advice, a second opinion that might help her on her decision.

And he concluded that Wilson-Raybould only began complaining about pressure over the SNC-Lavalin file after she was shuffled out of her position as Minister of Justice and Attorney General.

The following are the key points Butts wanted to get across in his statement and testimony:

The Prime Minister is blameless in the SNC-Lavalin decision:

“The Prime Minister gave and maintained clear direction to the [Prime Minister’s Office] and the [Privy Clerk’s Office] on this file. That direction was to make sure the thousands of people whose jobs were, and it bears repeating, are at risk were at the forefront of our minds at all times.”

“The [Prime Minisiter] told us to keep in mind at all times that the decision to direct the Director of Public Prosecutions to enter into negotiations for remediation agreements rests with the Attorney General, and the Attorney-General alone.”

“At no time did the Prime Minister or anyone in the government direct or ask the Attorney-General to negotiate a remediation agreement. The former Attorney-General confirmed that last week to this committee.”

All the PMO wanted was for JWR to seek outside legal advice:

“We felt that outside advice was appropriate because of the extraordinary consequences. That was the entirety of our advice to the Attorney General, which we made clear she was free to accept or not.”

“When you boil this all down, the only thing we ever asked the Attorney-General to do was to get a second opinion. And we also made it clear that she was free to accept that opinion, or not.”

I think it was incumbent on [JWR] to hear a [second opinion].”

Did the PMO’s call for a second opinion constitute pressure?

“In three-and-a-half years in government, we had one brief discussion about this.”

“I am firmly convinced that nothing happened here beyond the normal operations of government. Highly trained legal staff in PMO worked closely with PCO’s legal team on all aspects of the file, to make sure that the Shawcross doctrine was adhered to.” (The Shawcross doctrine outlines the purpose of remediation agreements is to denounce wrongdoing and hold the organization to account, while reducing harm to innocent employees, shareholders and other third parties.)

“Personally, I spoke with the former Attorney-General once on this file, on December 5th 2018.”

“The second and final meeting I had on the file was with Jessica Prince, the Minister’s Chief of Staff, and Katie Telford. That is the sum total of my personal interactions with the Attorney-General on this file. A brief conversation at the end of what I thought was a good dinner, and a meeting with her staff where I sought to understand her reticence to receive advice from an independent jurist.”

Did JWR complain about pressure from PMO?

“If something improper had been happening, and that impropriety had been made known to him, the Prime Minister would have put a stop to it. Even if the impropriety were his own.”

The cabinet shuffle had nothing to do with JWR’s handling of the SNC-Lavalin file:

“Neither her move from Justice nor Minister Lametti’s move into it had anything whatsoever to do with SNC-Lavalin.”

“Let me say at the outset, categorically: the January Cabinet shuffle had absolutely nothing to do with the SNC-Lavalin. In fact, I spent at least as much time working with colleagues to prevent the shuffle from happening as I did in preparing my advice for it.”

“In all our texts and emails, which begin the summer of 2013, there is not a single mention of this file or anyone’s conduct on this file until during the Cabinet shuffle.”