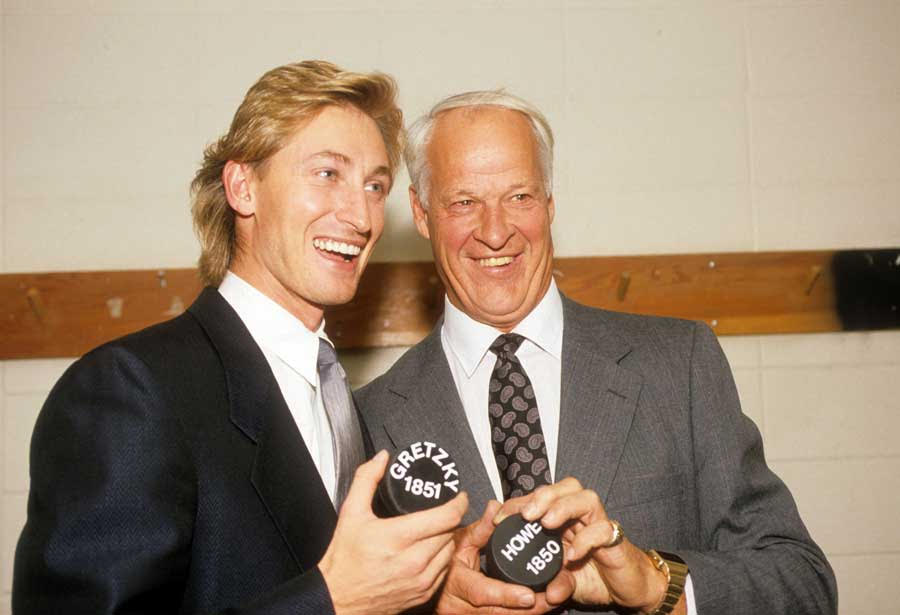 Two of the greatest hockey players of all time — Gordie Howe and Wayne Gretzky — are being honoured with a special exhibition at the Hockey Hall of Fame in Toronto.

The 9&99: The Howe • Gretzky Exhibition features a compilation of photos, milestone artifacts and rare personal memorabilia from the pair of legends, much of it from personal family collections.

While the two superstars made their mark in different generations, it seems only natural that Mr. Hockey and The Great One should join to share the spotlight in this special HHOF curation.

Howe, who passed away in 2016 at the age of 88, was a prolific scorer, regarded by many to be the best all-round player ever to play in the NHL. Besides being a consistent scoring machine, the Floral, Sask. farm boy was a terror to play against. He’d hit anything that moved and his reputation became so fearsome that no one would challenge him in a fight. Besides scoring, hitting and fighting, Howe was also one of the most durable athletes ever, playing in the NHL until the unthinkable age of 52, a record that still stands today.

Although Gretzky, now 58, lacked the toughness of Howe, he more than made up for that on the offensive end. When Gretzky retired in 1999, he was the top scorer of all time, breaking Howe’s totals along the way. Gretzky idolized Howe as a youngster growing up in Brantford, Ont., not far from Detroit, where Howe played. In fact, he wanted to wear No. 9 on his sweater but that was already taken by a teammate. So Gretzky was forced to settle on No. 99, which he eventually made the most famous number in hockey. And despite the fact he shattered Howe’s scoring marks, both Gretzky and Bobby Orr always maintained that Howe was the best ever.

Further linking these two generational players, Howe, who began his NHL career for the Detroit Red Wings in 1946, played his final season in the NHL for the Hartford Whalers in 1979-80, which happened to be Gretzky’s first year with the Edmonton Oilers. The two faced off four times that year, the final game taking place on Feb. 19, 1980, when Mr. Hockey officially passed the torch of hockey greatness off to The Great One.

What Makes A Sports Legend? (Gordie Howe and Muhammad Ali)