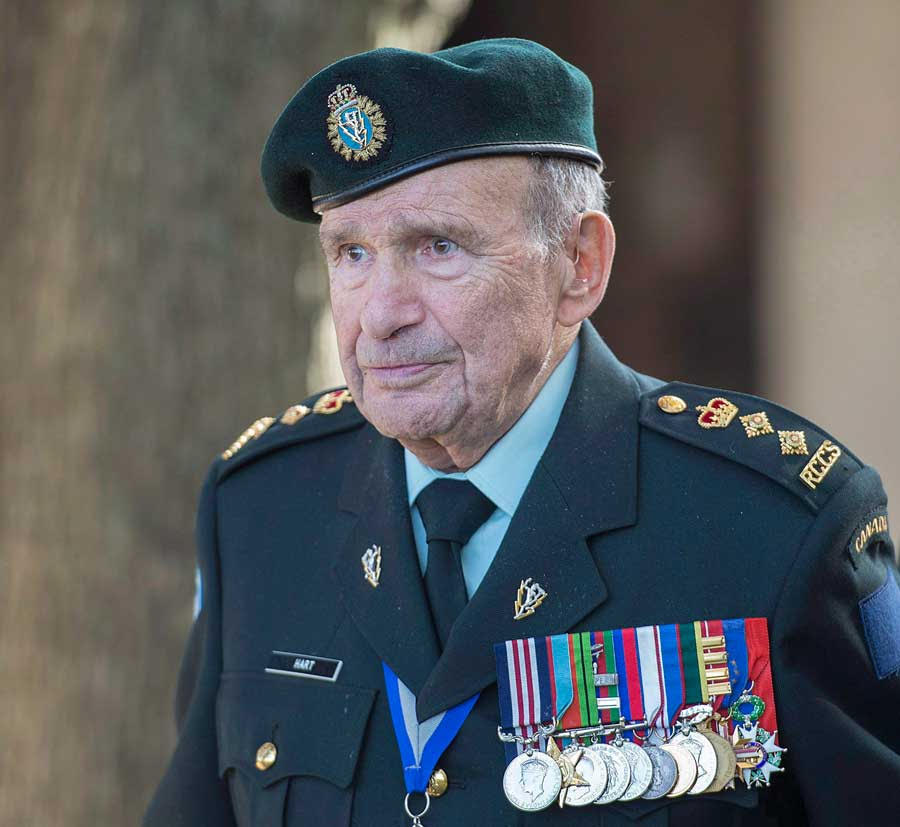 Colonel David Lloyd Hart, shown here in 2017, died at the age of 101. Hart, who was awarded a medal for bravery during the Battle of Dieppe, was Canada's longest serving officer. Photo: The Canadian Press/Graham Hughes

Honorary Col. David Lloyd Hart, who served in the army for Canada in World War II — including the Battle of Dieppe — died last week at the age of 101. The announcement was made by the Royal Montreal Regiment of which he was a member.

Born in Montreal in 1917, Hart first joined the war effort in 1937 and was called up for duty in 1939. As a Sergeant, Hart took part in the infamous 1942 raid on the French port of Dieppe, a disastrous attempt to breach Hitler’s fortress Europe.

“People were being shot at, people were being killed all over,” he recalled in a Canadian Army Public Affairs article. “It was an absolute catastrophe and I could see and hear the disaster taking place all around me. We were left immobilized near the beach and I thought I was going to be taken prisoner.”

As a radio operator, he somehow kept his head during the chaos of the Dieppe battle, communicating between the frontline and headquarters, trying to relay messages to troops in the frontline, who had been cut off from HQ.

Hart, who managed to survive the bloodbath in which 900 Canadians were killed and many more taken prisoner, was awarded a military role for “coolness under fire in the continuous performance of his duties.”

He continued to serve in the military until 1965, and then had a series of appointments, eventually being made Honorary Colonel, a ranking which he carried until the day he died — giving him the record of 81 years of military service.

“When looking at the life of this Canadian military icon, we are truly thankful for his dedication, courage and contribution to the military and Canadians,” said Lt.-Gen. Jean-Marc Lanthier, commander of the Canadian Army.

“Not only was he decorated for saving lives during World War II but he spent his entire adult life serving Canada and inspiring fellow soldiers both on active duty and in honorary positions.”

When asked about his lengthy life of and long-time service to Canada, Hart responded in the typically understated manner of old warriors: “I had been a high school cadet from ’31-’34, liked the Army and could see the winds of war were starting in ’37. So I joined. Thought maybe I’d be able to do my bit. And I guess I did.”