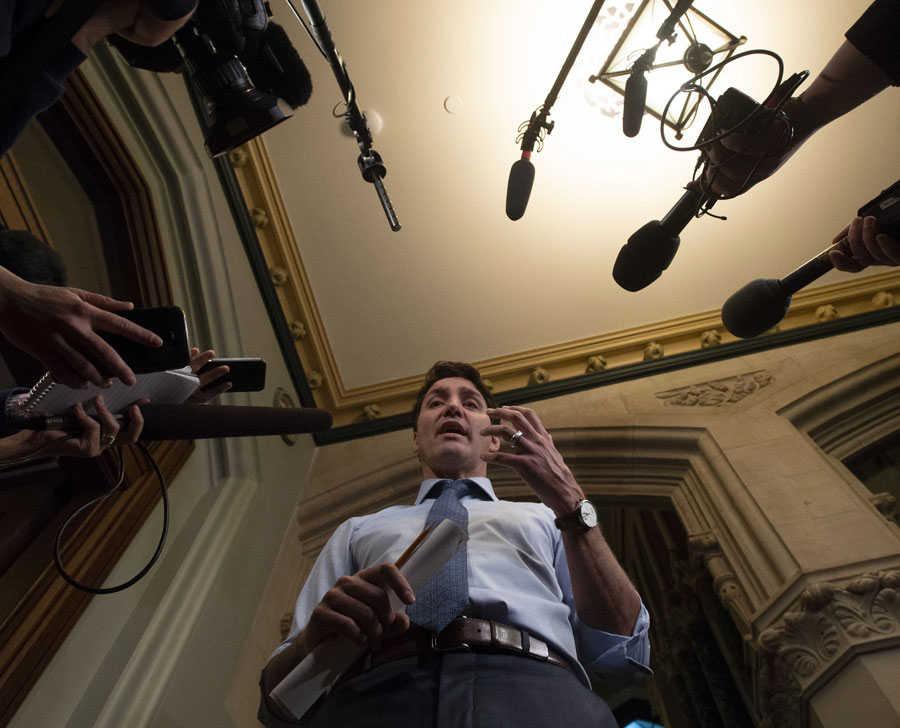 In an emergency meeting of the Liberal national caucus yesterday, Prime Minister Justin Trudeau finally took steps to quell a “civil war” brewing in the Liberal Party by announcing the expulsion of Jody Wilson-Raybould and Jane Philpott from caucus.

“The trust that had previously existed between these two individuals and our team has been broken. Whether it is taping conversations without consent or repeatedly expressing a lack of confidence in our government and me personally as leader, it has become clear that Dr. Philpott and Ms. Wilson-Raybould can no longer remain part of our Liberal team,” Trudeau told reporters, whom he had allowed into the caucus meeting.

The expulsion of the two high-profile cabinet ministers is the fulfilment of the “Saturday Massacre” that Wilson-Raybould predicted in her secretly recorded conversation with Privy Council Clerk Michael Wernick. Trudeau’s move yesterday was a long time coming and it seems strange that he waited so long to take this step — shouldn’t the two recalcitrant politicians have been expelled when they first started questioning the Party’s actions?

Using a tone of voice that aimed to express high dudgeon, Trudeau characterized the fallout from the SNC-Lavalin affair as an in-party “civil war” which can be “incredibly damaging because they signal to Canadians that we care more about ourselves than we do about them.”

The Prime Minister also heavily criticized his former attorney general for secretly recording a conversation with former Privy Council Clerk Michael Wernick, and then releasing it to the public.

“If a politician secretly records a conversation with anyone, it’s wrong,” he said. “When that cabinet minister is the attorney-general of Canada secretly recording the Clerk of the Privy Council, it is unconscionable.”

Wilson-Raybould felt her actions were not mutinous but, rather, went straight to the heart of changing how government works in Canada.

In a letter to members of the Liberal caucus, she wrote:

We committed to break old and cynical patterns of centralizing power in the hands of a few unelected staffers, the marginalization of hundreds of Members of Parliament with expertise and insights to offer, and the practice of governing in the shadows, out of sight of Canadians. I believed we were going to uphold the highest standards that support the public interest, and not simply make choices to create partisan advantage.

Philpott, who resigned as President of the Treasury Board claiming she had “lost faith in the government,” posted her resignation letter on Facebook:

It is a fundamental doctrine of the rule of law that our Attorney General should not be subjected to political pressure or interference regarding the exercise of her prosecutorial discretion in criminal cases. Sadly, I have lost confidence in how the government has dealt with this matter and in how it has responded to the issues raised.

Now that the two former stars of cabinet have been officially expelled from caucus, Trudeau hopes he can contain the damage from this “civil war” — which has been a gift to opposition parties, particularly the Conservatives. In a show of unity, the remaining caucus members stood up and cheered the Prime Minister.

Without a future in the party, both Wilson-Raybould and Philpott now stand as political free agents. While they may choose to run as independents in this year’s election, don’t rule out the other parties coming knocking on their doors — the NDP will undoubtedly court Wilson-Rabyould while Philpott might make a good fit for the Conservatives.

He Said-She Said: Are We Okay With Wilson-Raybould Releasing A Secretly Recorded Phone Call?