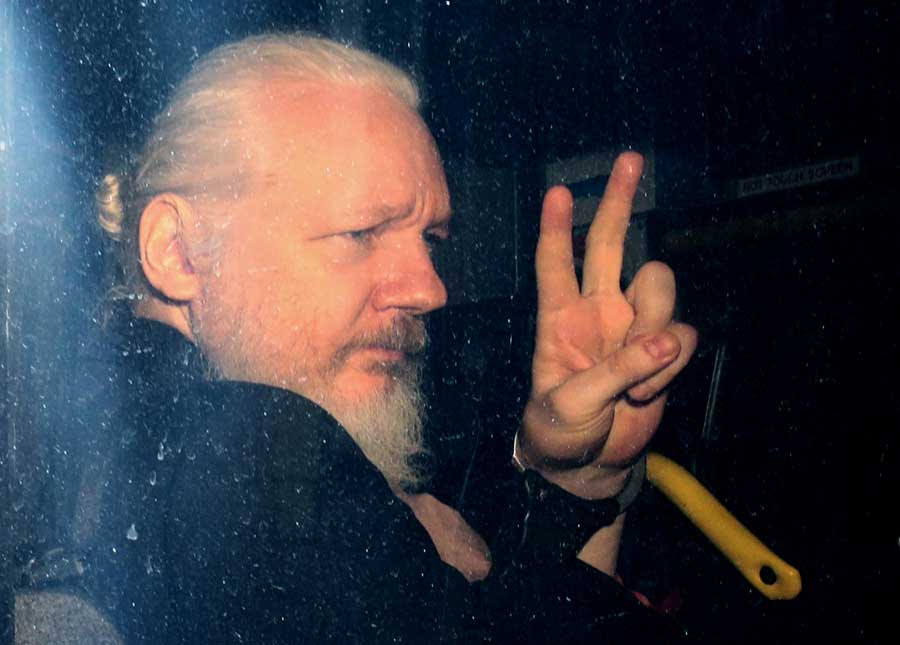 Julian Assange, the founder of WikiLeaks who is accused of hacking into the computers of governments around the world and releasing volumes of sensitive data to the public, has been arrested in London. After being dragged away by police in handcuffs, it was later revealed by Scotland Yard that he had been arrested on behalf of the U.S.

Looking nothing like the sleek, stylish, leather-jacket wearing provocateur we’ve become used to, (as he appeared in  2017 in his famous balcony speech), Assange’s scraggly beard and pasty and bedraggled appearance served as a dead giveaway to the effect of years of living in isolation has had on him.

Carried by police into a waiting van, his arrest is the culmination of years of efforts by the U.S. to stop the man they feel has stolen government material and compromised their security. He has been arrested under a U.S. extradition warrant for conspiring with Chelsea Manning to publish classified information, specifically those related to supposed war crimes committed by the U.S. army in Iraq and Afghanistan.

Assange, 47, an Australian computer programmer, started the WikiLeaks website in 2006. The site describes itself as a publisher of “large datasets of censored or otherwise restricted official materials involving war, spying and corruption.”

For years, Assange’s publications have been a thorn in the side of governments around the world, embarrassing them by his online posting of sensitive material obtained by computer hackers. WikiLeaks is perhaps most famous for releasing emails provided by Russian hackers of the Democratic National Committee in 2016. The fallout of the release of the 30,000 documents was used by then-Republican presidential hopeful Donald Trump to undermine Hillary Clinton’s presidential hopes.

Before his arrest, Assange had been holed up in the Ecaudorian embassy since 2012 fearing that his arrest would mean extradition to the U.S. where he is alleged to have conspired “to break a password to a classified US government computer.” He is also wanted in Sweden on allegations of sexual assault.

Ecuador’s President Lenin Moreno said Assange’s asylum arrangement with the country was ultimately revoked because of “repeated violations to international conventions and daily-life protocols” as well as his “discourteous and aggressive behaviour.” According to reports, he was continuing his WikiLeaks’ work on the Panama Papers, which listed the names of individuals, companies and trusts that were dodging taxes by holding money in offshore accounts. According to the CBC, hundreds of Canadians have been named in the papers and are now under investigation by the CRA.

Public support for Assange has always been sharply divided. Some feel that he is a dangerous computer hacker whose theft and publication of secret material comprises government security and endangers its officials and operatives. Supporters counter that he’s actually a heroic whistleblower, whose organization calls out corrupt government for illegal spying or committing crimes on unsuspecting citizens.

Edward Snowden, the former CIA employee whistleblower who stole and later released highly classified material concerning the National Security Agency in 2013, and is now living in exile in Russia to escape U.S. authorities, released a series of Tweets sympathetic to Assange.

And actress and model Pamela Anderson, who has had a relationship with Assange, took to Twitter to urge Wikileaks supporters to donate to WikiLeaks defence fund. In doing so, she also took shots at the UK for arresting him and at U.S. president Donald Trump.