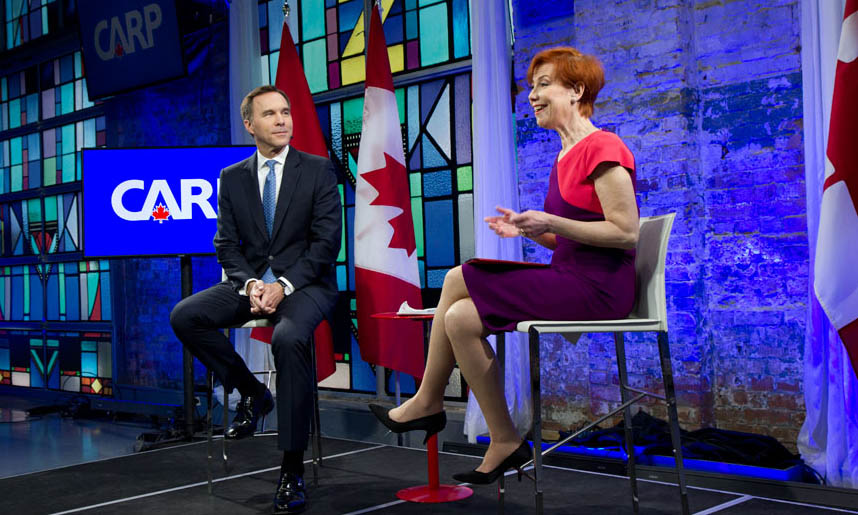 Federal finance minister Bill Morneau visited the Zoomerplex in Toronto today to take part in a special CARP Town Hall to discuss his government’s efforts to better support older Canadians and to listen to suggestions from CARP members and stakeholders on how he could improve policy.

Morneau used the event, which was broadcast live online, to speak directly to older adults, who comprise Canada’s largest voting bloc. Not only did he highlight the government’s record on seniors issues going into this fall’s federal election, but he took advantage of the opportunity to repair the bruising damage suffered by the Liberal brand in the wake of the SNC-Lavalin scandal. The latest Nanos federal ballot tracking polls show the Conservatives (with 35.5 percent) have passed the Liberals (33 per cent).

“In October, CARP launched its first national seniors platform (FACES) to make very clear to all elected officials what the key issues that older adults are advocating for across this country,” said CARP’s Chief Public Policy Officer, Laura Tamblyn Watts, in welcoming Minister Morneau. “We’ve been working hard with federal and provincial officials to make those asks happen. The goal, of course, is to make Canada the very best place to age.”

Before quizzing Morneau on seniors issues, host Libby Znaimer said that the Town Hall meeting was called because we’re all living longer. And not only do we have to change our attitudes and preconceived notions about aging, but we also have to rethink “the ways we allocate money to fund our longer lives.”

Belying his buttoned-down Bay Street look, Morneau adopted a friendly, approachable tone with the audience, and seemed well informed on all the issues. And to his credit, Morneau actually provided some concrete answers to difficult questions [a rarity for politicians at his level], refusing to shy away from responses that might not register well with the audience.

Libby congratulated the Finance Minister on a number of senior friendly measures put in place in the last federal budget including changes to GIS that allow older low-income Canadians to earn more money before the benefit is clawed back, $50 million for a new dementia strategy, additional funding for New Horizons program (seniors programs), and the implementation of a system that identifies Canadians who qualify for the CPP but have not applied for it. Znaimer also asked the Minister to respond to why several key issues were omitted from the budget, policies that CARP feels would immediately improve the lives of older Canadians. These included:

Issue #1: A CARP poll found that 64 per cent of Canadians are concerned about having enough money to last through retirement. Right now, tax policy forces Canadians to withdraw from their savings (RRIFs) each year after the age of 71, even if they don’t need the money. Because this policy forces retirees to unnecessarily deplete their capital which decreases future returns, CARP is calling for the removal of mandatory RRIF withdrawals.

“Issues like this I will never write off. But I will tell you that we’re attacking issues on a stepwise basis. The challenge when crafting a budget is finding where you’re going to have the biggest possible impact on people who are in the most difficult situations.”

Issue #2: In the wake of the Sears pension debacle, the government passed measures to increase protection for pensioners when the company sponsor goes bankrupt. CARP feels these measures don’t go far enough.

“Fewer and fewer Canadians have Defined Benefit pension plans. There’s been a decline in the number of organizations that sponsor these plans. We always want to be careful that we don’t take actions that actually continue that decline. If we create more onerous regulations, then it might actually decrease the likelihood that these plans continue to exist.”

Issue #3: With over eight million Canadians caring for a family member or loved one, CARP is calling for increased financial and respite Support for Informal Caregivers

Minister’s Response: Sizeable investments in homecare have been made

“We renegotiated the agreement between the federal government and the provinces around health care. Imbedded in that agreement was that we put $6 billion into homecare. We’re constantly looking at the tax code to make sure it addresses the challenges that are facing people. We’ll continue to look at issues like this in the context of our upcoming [Liberal federal election] platform.”

Minister’s Response: It’s a highly complicated problem but we’re moving on it

“It’s a really big challenge. The first issue is that pharmaceuticals in Canada are too expensive (third in the world behind Switzerland and the U.S. and). If it’s too expensive, that’s problematic. The second issue is access. The Canada Drug Agency [announced in the recent budget] was founded to use the negotiating power of the entire country to negotiate effectively on the price of drugs. And [we have to come up with] a common formulary [a universal listing of drugs that everyone needs.] There’s no simple ‘turn-the-switch’ solution. But we’re committed to getting to where every Canadian has access to the pharmaceutical coverage they need.”

Issue #5: With more than one in 10 older Canadians reporting that they’re victims of physical or financial abuse, CARP is calling for a National Elder Abuse Awareness Campaign and a 1-800 number to report and track it.

“This is an important issue. What I can say with absolute certainty is that I’ll take this issue back and make sure that I’m talking to [Seniors Minister] Filomena Tassi about it. I always have an important role in these issues because they come to me for funding. [Setting up] a 1-800 line is most certainly not a huge funding issue. What I can commit to is taking this issue away and making sure we look at it.”

Issue #6: The Ombudsman for Banking Services and Investments (OBSI) has, in many cases, been replaced by ADRBO, a for-profit company that resolves consumer disputes for banks. CARP feels that OBSI does a better job protecting older Canadians in resolving their disputes with banks.

Minister’s Response: If it ain’t broke, don’t regulate it

“We share the goal to make sure that the banking system has the services people expect and the protection they deserve. I’m agnostic on whether it should be delivered one way or another. I’m not agnostic about ensuring that people have the protections. If there’s evidence that there’s some problem, we need to react and appropriately deal with that. But I’m always going to try to make sure that we don’t regulate things when there’s not a reason to regulate them. If it’s working, then we can allow the market system to work.