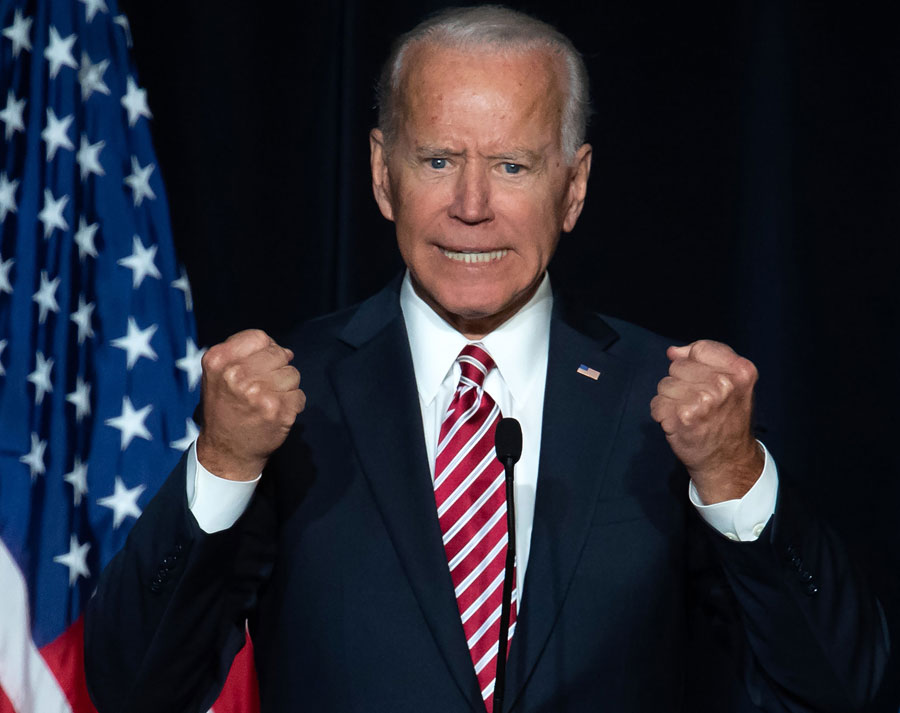 The former vice president Joe Biden has officially entered the race for Democratic nominee to run against President Donald Trump in 2020.

In a video address uploaded to YouTube this morning (see below), Biden opened with a reference to the racist protest in Charlottesville, Virginia in 2017, that saw one protester killed — 32-year-old Heather Heyer —  after being mowed down by a car driven by a white supremacist. Biden quoted President Trump, who at the time said there were,  “some very fine people on both sides.”

It’s here that Biden goes after the Trump. “Very fine people on both sides? With those words the President assigned a moral equivalent between those spreading hate and those with the courage to stand against it. And in that moment I knew the threat to this nation was unlike any I’d ever seen in my lifetime.”

Speaking directly to the camera Biden is eloquent and passionate about his mission to win not only the Democratic nomination, but also to win the Presidency in 2020, and to his mind, win back America.

“We are in the battle for the soul of this nation… If we give Donald Trump eight years in the White House he will forever and fundamentally alter the character of this nation… and I cannot stand by and watch that happen. Folks, America is an idea, an idea stronger than any army, bigger than any ocean, more powerful than any dictator or tyrant. It gives hope to the most desperate people on earth, it guarantees that everyone is treated with dignity, and gives hate no safe harbour…We can’t forget what happened in Charlottesville, even more important we have to remember who we are. This is America.”

Despite the eloquent rhetoric, the affable “everyman” from Pennsylvania, will still have to overcome the harassment claims made by Lucy Flores, that he smelled her hair and gave her “a big slow kiss” on the back of her head during her campaign for Nevada lieutenant governor. Other women followed suit about Biden’s penchant for invading personal space. He responded with a video promising to be more mindful. Biden’s team must feel it’s been dealt with, and of course, doesn’t compare to then-candidate Trump’s groping comments made to Access Hollywood correspondent Billy Bush on the campaign bus back in 2016.

But personal space aside, what Biden also has going for him is his age, 76. Not because older is wiser (though surely it is, right?) but because his main opponent for the nomination is Senator Bernie Sanders who is 77.

There are younger upstarts in the race, such as Pete Buttigieg, the 37-year-old married gay mayor and Afghanistan veteran from South Bend, Indiana, Beto O’Rourke, 46, Cory Booker, 49 and of course a few powerful women like Kamala Harris, 54 and Kirsten Gillibrand, 52.

But there seems to be a belief that in order to beat Trump — which has overtaken other motivations for the Democrats such as health care, etc. — you need to fight fire with ire. Or age with age. And current President Donald Trump is a ripe old 72.

American politics, despite the hopeful change that ushered in Barack Obama as the first African-American president and almost saw Senator Hillary Clinton break the glass ceiling in 2016, we are back to the old white guy trope.

And given that Biden has lived a long and full life, there are some moments for opponents to attack from both parties. Everything from his supporting an anti-busing bill in 1975 (he supported desegregation but opposed forced busing) to his handling of the Anita Hill hearing, where he was the Senate Judiciary Chair and was criticized not just for the hearing’s intimidating vibe, but also for its structure and his refusal to bring forth additional witnesses who could have substantiated Hill’s allegations. It was an earlier version of the all-male, all-white committee that would repeat last year with Brett Kavanaugh and Christine Blasey Ford.

His 40 or so years in public office means Biden will stand in for everything voters hated about those last 40 years, including his tenure as Vice President under President Obama. Obama released a statement today after Biden’s bid became official.  “President Obama has long said that selecting Joe Biden as his running mate in 2008 was one of the best decisions he ever made. He relied on the Vice President’s knowledge, insight, and judgment throughout both campaigns and the entire presidency. The two forged a special bond over the last 10 years and remain close today,” his spokesperson Katie Hill said.

But on the flip side there are many elements to the man that make people like him. For one, his moniker of “Amtrak Joe” for his love of trains and support of the railway system; he also famously boarded a train after the Trump inauguration. And his life has been mired with personal tragedy, in 1972 his first wife and baby daughter were killed in a car accident, then in 2015 his son Beau, who had survived the car crash, passed away from brain cancer. He has been an advocate for cancer patients since.

So will the Uncle Joe carry the day and make America Joe again? Biden is counting on it.