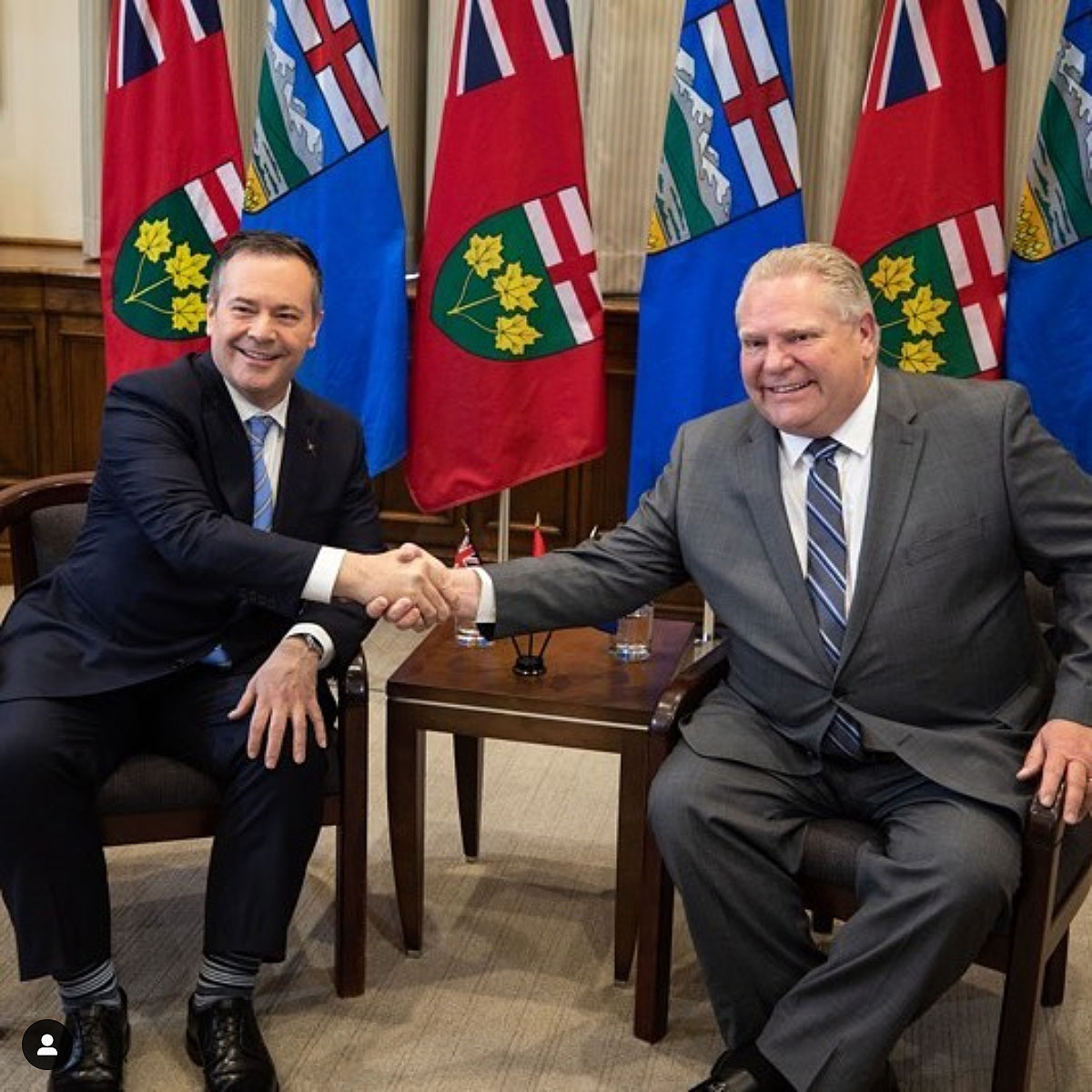 In a press conference/love-in at Queen’s Park today, Ontario premier Doug Ford and new pal Alberta Premier Jason Kenny discussed business opportunities, support for pipelines and congratulated each other on their efforts to fight the carbon tax.

No doubt, Ford also introduced Kenny to the pastime of stickering and the resulting carbon-tax sticker war that has broken out in Ontario.

It started with a new piece of legislation introduced by the Conservative Party in Ontario’s budget called the Federal Carbon Tax Transparency Act. This policy requires gas stations to display government-mandated stickers about the price of the carbon tax on each pump. Under the new legislation, gas stations that fail to comply could face fines of up to $10, 000 a day.

The government-issued sticker illustrates — using a bar graph and arrow — the carbon tax adding 4.4 cents per litre to the price of gas now, rising to 11 cents per litre in 2022 with the words “The federal carbon tax will cost you” at the top.

In an attempt to offset the added cost, the federal government is giving Ontario taxpayers a rebate called the “climate action incentive” that amounts to $307 for a family of four on their 2018 income tax return.

Among the legislation’s critics are also the Chamber of Commerce and The Canadian Civil Liberties Association — the latter of which challenged the constitutionality of the law, claiming that it violates freedom of speech by compelling gas station owners to post political advertisements.

Not surprisingly, Green Party Leader Mike Schreiner wasn’t a fan of the message on the sticker, either.

However, the Conservatives choice of medium may have enlightened Schreiner to the joys of stickering. Trolling the PC leader, Schreiner created his own sticker with a nearly identical illustration and design that reads: “Climate change will cost us more.”

Under the bar graph, the spoof-sticker lists a number of bullet points outlining some of the potential effects of climate change including worsening extreme weather events, rising temperatures and an annual cost of $91 billion by 2050.

Schreiner said he wanted to inform people “about the real costs of the premier’s campaign to sabotage climate solutions. So we thought, ‘Why not just produce a sticker that tells the other side of the story.'”

He says he plans to offer his stickers to gas stations who want to display them alongside what he calls “the propaganda stickers.”

Although, gas station owners and attendants will have to take extra care with the Conservative stickers.

The legislation also allows the government to send sticker inspectors to see if gas stations are properly displaying them. That means no creases or peeling corners (nobody enjoys a careless sticking of stickers, especially these professionals).

If the Liberal Government is considering designing a sticker of their own in defence of the carbon tax, they might want to consider the environmental consequences — something the Green Party failed to do. Ironically, the side of a sticker that is printed on is often made of polyvinyl chloride, the most environmentally damaging plastic according to Green Peace.

Perhaps they should all stick to (no pun intended) environmentally friendly attack ads. After all, there’s only so much you can fit on a sticker.