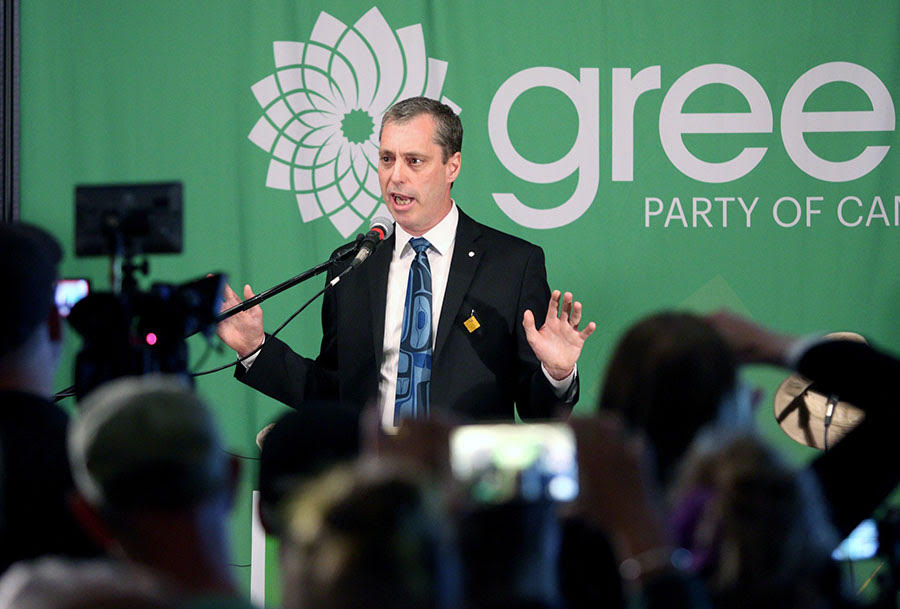 In what the Green Party members are hailing as “the dawn of a new era in federal politics,” Paul Manly surprised his opponents from the big three federal parties by decisively winning last night’s federal by-election in Nanaimo-Ladysmith, B.C.

“On Friday, I’m going to Ottawa,” a jubilant Manly told supporters. Once in the capital, he’ll join Green Party leader Elizabeth May as the only MPs ever to be elected for the party. It’s a small base, for sure, but a clear signal to the Liberals,  Conservatives and NDP that the Greens could play a spoiler role in the upcoming federal elections.

After the ballots were counted, Manly, a filmmaker and communications specialist, had won 38 per cent of the vote, a 5,000-vote margin over Conservative candidate John Hirst, who came in second at 25 per cent. The NDP’s Bob Chamberlain, finished third in votes with 23 per cent and the Liberal Michelle Corfield finished a distant fourth with only 11 per cent. The by-election was called after former NDP MP Sheila Malcolmson resigned to run as a candidate in the provincial election.

“Whether it’s people dealing with floods in the east or forest fires in the west, people are seeing the threat now,” said Manly. “Our forests are dying around us and it’s time to take bold action.”

May and the rest of the Greens were clearly thrilled at the results, posting this Kermit the Frog-inspired gif on Twitter.

In his victory speech, Manly promised he will push for changes to the “old” economy — which he explained as ending our reliance on fossil fuels. “We moved beyond the horse and buggy and its time to move beyond the internal combustion engine. “I will not compromise on the future of our children and our grandchildren.”

May claimed that last night’s victory — combined with the Greens strong showing in the PEI elections (where they now form the official opposition) as well as recent polls that show the party has cracked double digits in support — shows that Canadians are finally ready to make the environment a top priority. “It’s brave to vote for real change,” she said.

The Green Party poses a problem for all parties, but especially the Liberals and NDP, which have lost supporters who have found a home with the Greens.

He also tried to spin the victory in Liberals favour that the rise of provincial leaders (in Saskatchewan, Alberta, Ontario, Manitoba and New Brunswick) who oppose the carbon tax mean that it becomes more important that “Canadians pick a government this fall that is committed to climate action.”

While the Liberals are promoting their carbon tax as the answer to climate change, environmentalists have criticized the party for owning pipelines and providing breaks to major polluters. The Greens, on the other hand, “own the issue,” which Shachi Kurl of the Ottawa Citizen says is behind their surge in popularity.

We’ll see this fall whether environmentally minded voters will choose the Liberals’ vision for climate change or empower the upstart Green Party to effect change.

Climate Change: The Geopolitical, Economic, Health and Moral Issue of Our Time