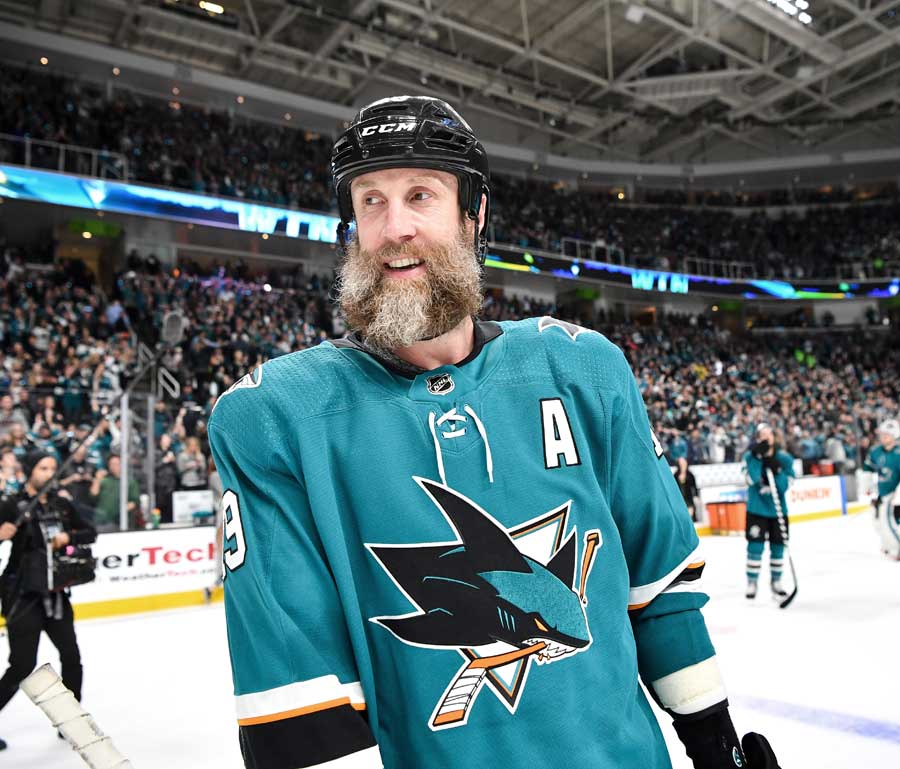 San Jose’s emotional leader Joe Thorton has a shot to win his first Stanley Cup Playoffs at the age of 39. (Photo: Photo by Brandon Magnus/NHLI/Getty Images)

The early dismissal of Canadian teams in this year’s Stanley Cup playoffs has left the hockey fans in this country with no one to cheer for.

And now that we’re down to four clubs — the San Jose Sharks play the St. Louis Blues and the Boston Bruins face the (Uggh) Carolina Hurricanes — the pickings have become very slim indeed. The distinct lack of appeal of any of these teams has left hockey fans up north without a horse in the race.

So what’s a playoff-loving hockey fan to do?

Our advice? Instead of cheering for any of these teams, we suggest you back an individual. And since at EZ we’re all about older athletes, we’re adopting San Jose’s 39-year-old greybeard, Joe Thornton.

(Yes, it would actually make more sense to back Boston’s 42-year-old wonder Zdeno Chara, one of the oldest athletes in any sport. But, unlike Thornton, Chara has already won a Stanley Cup. And if he wins it again, it will mean the detestable Brad Marchand gets to share in the joy. In deference to Toronto Maple Leaf fans, we couldn’t possibly cheer for a team with a player who does despicable things like this.)

So that makes Joe Thornton as our sentimental favourite to win the Stanley Cup.

San Jose’s emotional leader, Jumbo Joe (it’s a long story but has to do with a statue of a circus elephant from Thornton’s hometown of St. Thomas, Ont.) is a sure-fire Hall-of-Famer who, after 21 seasons, just keeps going and going and going. Remarkably, when Joe played his first NHL game in 1997, teammate Timo Meier was just a one-year-old toddler growing up in Switzerland.

Not only is he a highly skilled player who ranks 14th all-time in points, Thornton is also a loveable goof and proud possessor of a legendary playoff beard, which has become so famous it has its own Twitter feed as well as a sponsor.

Although off the ice he would be considered a young man, in the sports world he’s ancient. His advanced years, of course, make him the ongoing target of chirpy cheap-shots from younger players. Teammate Brent Burns, who also sports a ratty beard, laughs at the amount of grey that’s found in Thornton’s. Burns calls it a “racing stripe” saying that Thornton’s “face looks like a 1971 Dodge Charger.”

In the playoffs this year, Las Vegas Golden Knight’s forward Ryan Reaves poked fun at Thornton for expressing bewilderment at the suspension he received for a high hit on Tomas Nosek. “I honestly thought I barely touched him,” said Thornton, reacting to his suspension. To which Reaves responded: “I’ve got a buddy with a grandpa who’s going through the same thing. He can’t see very well because he’s getting old. Needs glasses.”

Ouch. But the always affable Thornton is used to grandpa jokes and takes them in stride. Because he knows that despite his advanced years, he’s got the respect of players around the league. “He’s got a pure, unadulterated passion and love for the game. I’ve been in the business for 40 years, and I’ve never been around anybody like that,” says Sharks’ GM Doug Wilson. Burns says Thornton’s ability to play such a tough sport at his age rubs off on teammates. “He doesn’t have an off switch. His pain threshold is insane, his work ethic is insane, his talent level is insane. The energy that he creates is so high.”

So, as we enter the conference finals, we’re officially adopting Jumbo Joe Thornton of the San Jose Sharks, cheering him on to his first Stanley Cup. He’s Canadian, tremendously skilled, maintains a passion for hockey and is just such a darned likeable character. What better choice could we make?

Remember When Canadian Teams Used to Win the Stanley Cup?