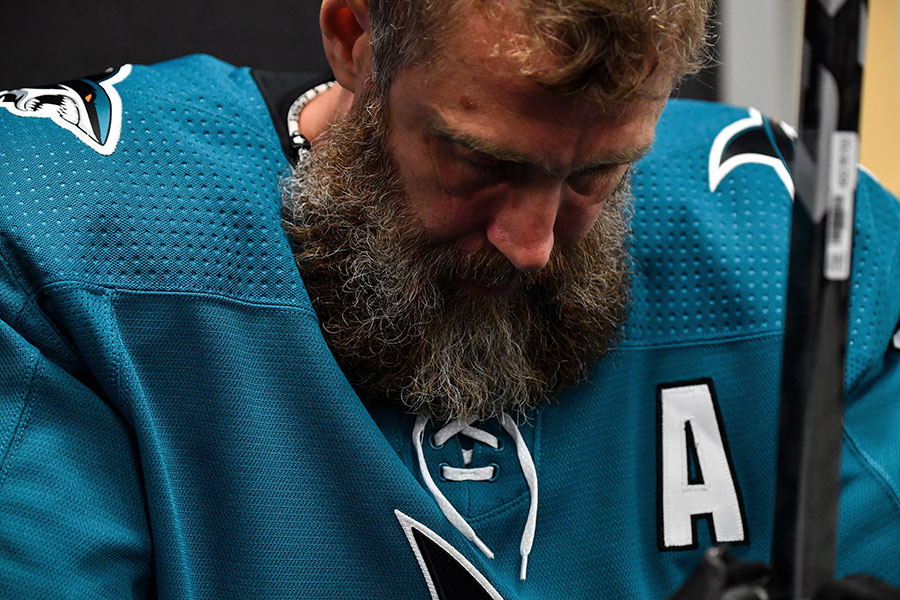 Joe Thornton has played 21 seasons in the NHL but hasn't won a Stanley Cup. After being beaten out by the St. Louis Blues last night, will he get any more chances? (Photo: Brandon Magnus/NHLI via Getty Images)

Joe Thornton will not win the Stanley Cup this year.

Because this year it seemed like all the pieces were falling into place for the grey-bearded Thornton, who turns 40 in July, to finally taste victory. The likeable, classy veteran and sure-fire Hall-of-Famer has had a fantastic career. But the only thing he lacks is a Stanley Cup and, without a Canadian team to cheer for, he was this year’s emotional favourite to win one.

And, after 21 Cup-less seasons, this surely seemed like the year it would happen. With Brent Burns, Erik Karlsson, Joe Pavelski, Tomas Hertl and Logan Couture, the Sharks were absolutely stacked with talented players who had been around long enough that they knew what needed to be done to win. They had exceptional luck in the first two rounds and with a combination of hungry veterans and enthusiastic youngsters, they had the right mix to finally make it.

But sports — especially hockey — has an annoying habit of deviating from the script. Injuries to star defenceman Erik Karlsson, team captain Joe Pavelski and the always dangerous Tomas Hertl left the team very short-handed against the defensive-minded Blues. It didn’t help that goalie Martin Jones was outplayed by his opposite, Jordan Binnington. And playing the full seven games in their opening two series meant the Sharks left them with little gas in the tank for their tilt against St. Louis.

So, as last night’s game wore on and the Blues’ victory became inevitable, you could see the disappointment written all over Joe’s haggard face. After the game, he wouldn’t say whether he would retire or not but it’s unlikely he’ll be back in San Jose.

He’ll be a free agent in July and the Sharks, after a decade of coming close but not quite reaching the peak, will probably begin changing the line-up and rebuilding with a new cast. So even if Thornton signs for another year, the window for this team to win has all but closed.

Perhaps he’ll catch on with another Cup contender next year, but the market for 40-year-olds will probably not be fierce. The fact that Thornton will likely retire without a Stanley Cup doesn’t diminish anything Thornton has accomplished in his long career. But it would have been nice to see this affable warrior go out on top.

Unfortunately for Joe and his many fans — in San Jose and across Canada — while sports always provides plenty drama, it doesn’t necessarily produce happy endings.