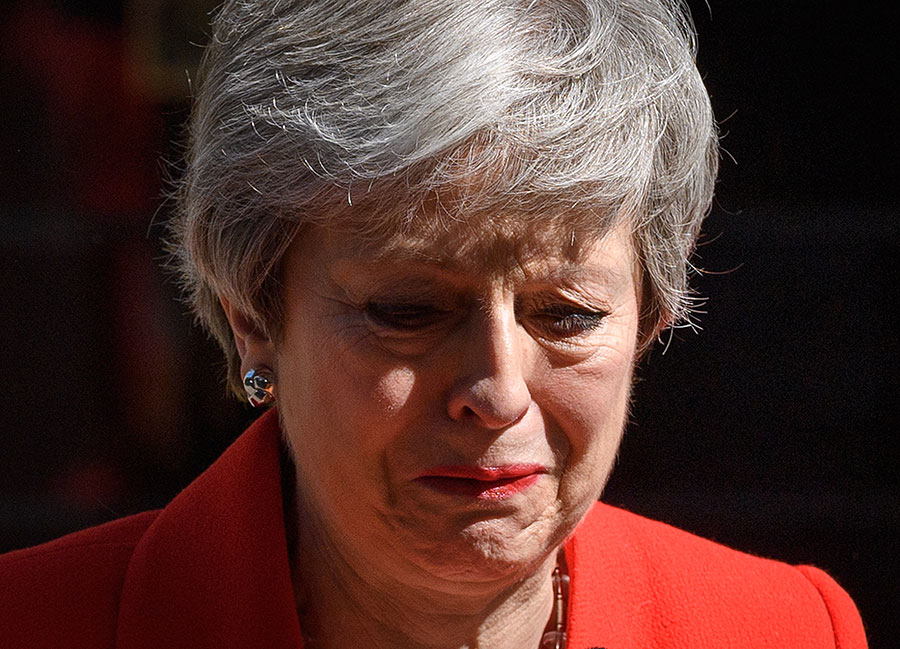 After failing to reach an acceptable Brexit deal, British PM Theresa May announces she will step down in June. (Photo: Leon Neal/Getty Images)

The interminable Brexit chaos that has consumed Britain for the last few years reached an inevitable conclusion yesterday with the resignation of Prime Minister Theresa May.

After repeated failures to carve out an acceptable deal that would pull the U.K. out of the European Union, May saw that she had no other choice but to bow to pressure and announce that she would resign next month.

“I will shortly leave the job that has been the honour of my life to hold. The second female prime minister, but certainly not the last. I do so with no ill will but with enormous and enduring gratitude to have had the opportunity to serve the country I love,” said the tearful leader in a speech at 10 Downing.

May, 62, was chosen as Conservative Party leader after David Cameron resigned in 2016 when the country voted in favour of leaving the European Union in a referendum. May won the position largely because she was seen as a leader who could successfully negotiate a favourable withdrawal agreement from the EU. In order to consolidate her power and strengthen her mandate, she called an election in 2017.

However, this proved to be a disastrous decision. May’s Conservatives only returned a minority government and this rebuke by the voters left her with a weakened hand not to mention rebellion in the ranks, especially from hard-line Brexiters like Foreign Secretary Boris Johnson, who felt she was giving away too much in negotiations with the EU.

With her party in open rebellion, (one Conservative MP described it as the “worst cabinet ill-discipline in history,” May gamely forged ahead with a series of unpopular deals aimed at extricating Britain from the EU. But the complexity of the task and the lack of support from her own party (she faced several no-confidence motions and a wave of harsh criticism from her colleagues and the press) meant these deals were doomed from the start.

It became impossible to forge a deal with terms that would please all the factions in the party. And after three deals and three resounding defeats, May was faced with no other choice but to resign.

In the end, the notoriously vicious British press portrayed her as a resilient but ultimately weak leader who muddled negotiations and left the Brexit process in a complete mess. Newspapers on both sides of the Brexit issue mocked her tearful exit and labeled her a disaster, with one Guardian columnist going so far as to dub her the “worst Prime Minister in modern times.”

The next steps for Britain in this Brexit mess is anyone’s guess. With an October deadline looming, some politicians feel that negotiating a withdrawal agreement will be impossible and suggest that Britain leave without a deal. Others suggest a do-over of the 2016 referendum that mandated Brexit. Still others are suggesting that Britain hold a general election, which would clarify where the country stands on Brexit.

Until that happens, the Conservatives need a new leader. Boris Johnson, who is seen as the front-runner to replace May, paid tribute to his former colleague on Twitter.

Dominic Raab, a frequent critic of May’s, whose name has also been mentioned as a possible successor, tweeted about May’s patriotism.

And Nigel Farage, leader of the Brexit Party, laid out where the Conservatives stand politically.