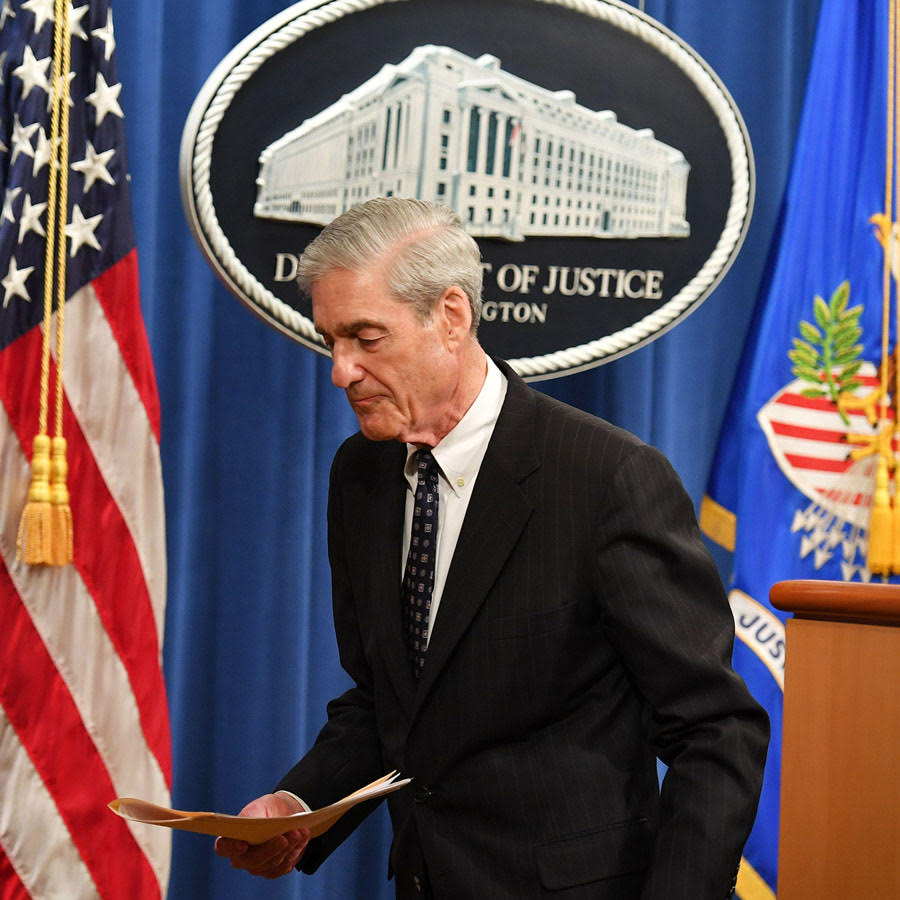 Special Counsel Robert Mueller departs a press conference after announcing that he is closing the investigation into Russian interference in the 2016 election. (Photo: Mandel Ngan/Getty)

Special Counsel Robert Mueller, the man behind the investigation into Russian election interference and obstruction of justice by President Trump, finally broke his silence today at a press conference in Washington.

“I am speaking today because our investigation is complete. We are formally closing the special counsel’s office,” said the 74-year-old. “I am resigning from the Attorney General’s office and returning to private life.”

Before departing the scene, the mysterious figure who has dominated political talk in Washington for two years and whose eponymously named report was supposed to be the magic-bullet that brought down the Trump administration, reiterated, for the final time, just what his investigations uncovered.

The bulk of Mueller’s press conference today went into great detail about turning up evidence of “numerous efforts emanating from Russia to influence elections.”

That much we knew. However, the secondary task of the Russian probe was to look into charges that the President was guilty of obstructing justice during the investigations. On that count he remained frustratingly enigmatic, neither accusing nor absolving Trump.

While his probe found that there was “insufficient evidence to charge a broader conspiracy” he said that his findings didn’t mean there was no obstruction. “if we had had confidence that the President clearly did not commit a crime, we would have said so,” noted Mueller. “We did not, however, make a determination as to whether the President did commit a crime.”

But even if his investigations had turned up a crime, Mueller remained adamant he did not have the power to charge Trump. “Charging the President was not an option we could consider. Under longstanding department policy, a president cannot be charged with a crime while he’s in office.”

Mueller alluded to the fact that while his office could not charge the President, others could. (By this, he presumably meant Congress.) However, he noted that he would now remove himself from the equation, saying it wouldn’t be “appropriate” for him to testify before Congress. “No one has told me whether I can or should testify. Any testimony would not go beyond this report. The report is my testimony.”

After the press conference ended, he did not take questions. So the two-year wait for Mueller to finally speak came and went, leaving the public with just as many unanswered questions as before.

So what was the purpose of this exercise? In effect, Mueller was announcing that he has provided all the facts, evidence and testimony. It was never his job to do anything more than that. That task, he implied, now lies in the hands of Congress.

Trump, not surprisingly, tweeted that there was “insufficient evidence” to charge him and therefore the “case is closed.”

But Jerry Nadler, Chair of the House Judiciary Committee, tweeted that far from being case closed, it’s only beginning.

And if his comments are any indication, the Mueller report is destined to remain a hot issue long after the man who wrote it has departed the scene.