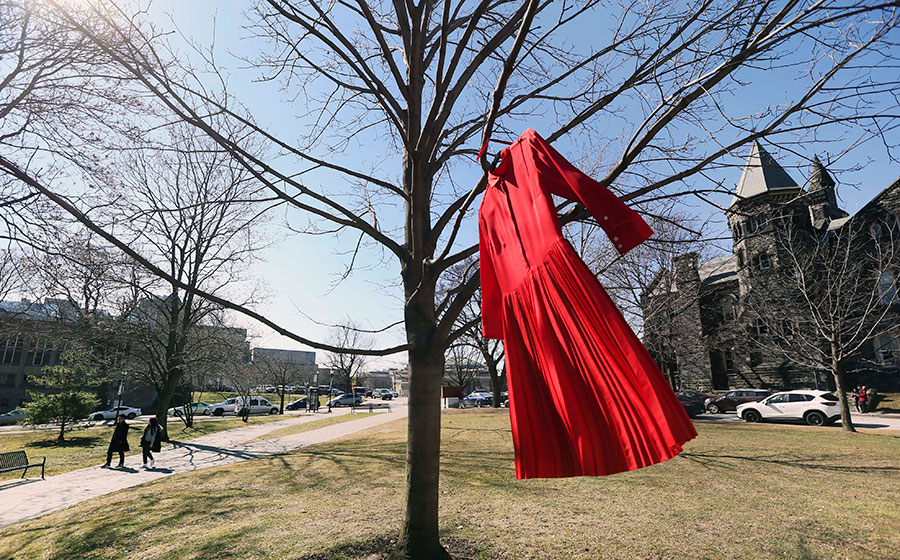 A red dress can be seen hanging from a tree on the University of Toronto campus as part of the Red Dress Project, which brings attention to Canada's missing and murdered indigenous women and girls. Photo: Andrew Francis Wallace/Toronto Star via Getty Images

Canadians who cherish this nation’s reputation as a model of social justice and equality will be dismayed, if not disgusted by the revelations in the final report delivered Monday from the Inquiry into Missing and Murdered Indigenous Women and Girls.

Three years in the making, with testimony from thousands of Canadians, the report is damning.

Marion Buller, a First Nations woman and British Columbia judge who is the chief commissioner, refers to what has been happening as “genocide.”
And Indigenous and Northern Affairs Minister Carolyn Bennett calls it “a national tragedy.”

The recommendations, says Buller, should be implemented as “legal imperatives” because “this report is about deliberate race, identity and gender-based genocide.”

She added, “As a nation, we face a crisis … the continuing murders, disappearances and violence prove that this crisis has escalated to a national emergency that calls for timely and effective responses.

“This is not what Canada is supposed to be about; it is not what it purports to stand for.”

Among the recommendations: official language status for Indigenous languages; a guaranteed income for all Indigenous peoples; a charge of first-degree murder in cases where there is a pattern of intimate partner violence and abuse; sweeping changes in how cases of missing and murdered Indigenous women are handled by police and in the courts.

The inquiry also calls for more Indigenous judges and police or even a separate court system for Indigenous people.

The report also calls for improving the restraining order system to protect Indigenous women faced with a violent partner and for guaranteed access to financial support, legislated paid leave and disability benefits and, “appropriate trauma care” to Indigenous victims of crime or other traumatic events.

“Skeptics will be fearful and will complain that the financial cost of rebuilding is too great,” Buller said. “To them I say, we as a nation cannot afford not to rebuild. Otherwise, we all knowingly enable the continuation of genocide in our own country.”

Indigenous and Northern Affairs Minister Carolyn Bennett told the CBC that the government accepts that the status quo isn’t keeping Indigenous women and girls safe but that it has been moving ahead with meaningful reforms, including a de-colonizing push for greater self-government for Indigenous peoples.

“The inquiry is really only a beginning. We’ve got to do the work, and we’ve got to change attitudes, and we’ve got to increase the safety of Indigenous women and girls wherever they are in this country,” Bennett said. “That’s the only way we’ll stop this national tragedy.”