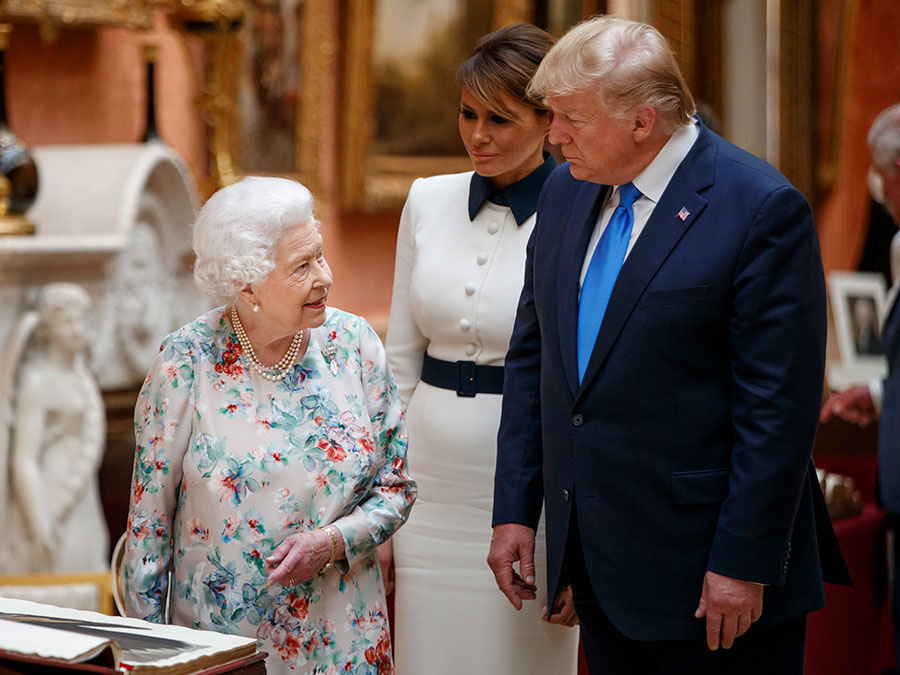 Forget the Raptors and the Golden State Warriors. The really exciting match-up right now is happening in London: Her Majesty the Queen vs. U.S. President Donald Trump.

Two heads of state, one frighteningly powerful but ridiculously foolish, the other absolutely powerless but iconically gracious and dignified.

We know he’s practically orgasmic about being treated like royalty by the British Royal Family: gun salutes, inspecting the troops. state banquet with the best china, hobnobbing on equal footing with her Majesty and a full complement of upper echelon princes, duchesses and dukes, including the Duke of Sussex a.k.a. Harry, whose wife he called “nasty.” Oh yes, he did — in response to being told that Meghan had called him misogynistic in 2016, when she was just an actress living in Toronto.

But Harry knows his stuff, and his role, and helped show the Trump family around Buckingham Palace today after the two families lunched together at the palace.

Later, after visiting Westminster Abbey with Prince Andrew, the Trumps went to Clarence House to take tea with Charles and Camilla.

Brits are salivating over the tete-a-tete between Donald and Camilla who, as everyone knows, is more than capable of putting him in his place if he’s the least bit out of line.

The rotund baby Trump balloon is flying over London and one commenter to the Times (of London) summed up what many Trump watchers are thinking about this visit: “Any normal president would be conscious of the need for manners and protocol but not this one. This is another opportunity to grandstand for his base.”

On the other hand, the Brits are totally exhausted by Brexit and relish the entertainment the Trumps are providing. One commenter even called the President “a breath of fresh air.”

But nobody should expect any shenanigans or embarrassing moments during this visit.

Trump and his entourage want, above all, to be seen as royal as the Royals and will no doubt behave properly. There will likely be no rudeness or fireworks. The most that can be hoped for, by those waiting for some excitement, is a moment’s lapse or a dog whistle.

It is, after all, the Queen setting the tone for three-day visit and there is no upstaging or embarrassing Her Majesty. She has been on the throne for 67 years, since Donald was 5 years old. She has seen off Hitler, Stalin and has hosted a dozen U.S. Presidents.

Both her position and her personality are a model of manners and protocol.
Trump has already crossed the line in advance of the visit with comments about British politics, Brexit, electing Boris Johnson as the next Prime Minister, and Meghan.

But during the visit, we expect he’ll behave, like an otherwise bullying schoolboy would in the presence of a strict, no-nonsense principal.

The most entertaining part of the visit will no doubt take place after the Americans depart, behind closed doors, when the Royals talk about the Trumps.