How Courage, Timing and Ingenuity Led to the Allied Victory on D-Day 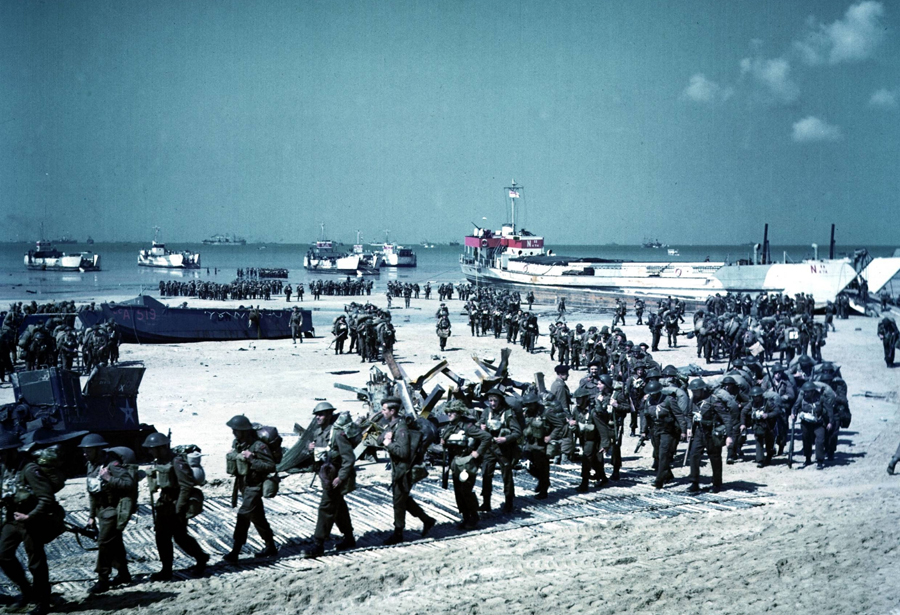 Canadian soldiers being deployed on Juno Beach, Normandy. This image was taken after the initial D-Day landings. Dated in 1944. Photo: Photo12/UIG via Getty Images

As we mark the 76th anniversary of D-Day, we look back on Jayne MacAulay’s exploration of the roles that courage, ingenuity and exceptional timing played in leading the Allies to victory.

Before retiring to bed on the eve of D-Day, Winston Churchill remarked to his wife Clementine, “Do you realize that by the time you wake up tomorrow, 20,000 men may have been killed?” His pillow talk turned out to be an over-estimation. The Allies lost approximately 4,400 in the invasion of France.

It could have been worse, for Operation Overload, the code name for the largest amphibious invasion in history, was a vastly complicated exercise dependent on the ingenuity, resolve and courage of thousands. There were no guarantees – success also depended to a large extent on secrecy, deceptive strategies and the notoriously unpredictable weather of the English Channel. Much could go badly wrong.

D-Day had been set for June 5, 1944 when a full moon and tides were favourable for landing, but spring storms with rough seas and clouds that would prevent vital air support could mean a month’s postponement. In fact, Supreme Allied Commander General Dwight D. Eisenhower ordered Force U, a flotilla of 865 vessels that was already sailing to Utah Beach in France to turn around. But Mother Nature relented, if only slightly, and the General’s chief weatherman reported a window of better weather on June 6.

Eisenhower decided Overlord would go ahead. (He also scribbled a quick letter, which fortunately, he never needed to use, praising his warriors and accepting the blame if the operation failed.) Across the Channel, German meteorologists didn’t predict a coming break in the weather. Even the respected Field-Marshal Erwin Rommel, Hitler’s commander in Normandy, left his post to celebrate his wife’s birthday at their home, 12 hours away, assuming conditions were too risky for an attack.

Rommel had strengthened coastal defences in the region but wasn’t allowed the men and panzer tank divisions needed to repel invaders within 24 hours. Hitler and others thought a bigger invasion would come at the Pas de Calais, the shortest route across the Channel. Rommel’s options were limited on June 6 because Hitler had given orders not to wake him, so the panzers he controlled were held back. Even as the landings continued, there was still a belief there would be a bigger one in the north – a belief the Allies promoted to keep resources away from the beaches. (Operation Fortitude, for example, included build-ups of army divisions and inflatable tanks and jeeps – all fake – across from Pas de Calais; Fortitude North was a phony invasion of Norway.)

As risky as it all seemed, it was the determined, mostly quite young soldiers, who did what was needed at just the right moment.

Flying Officer Bill Novick, 20, had orders to destroy a vital bridge between the city of Caen and the British and Canadian landing beaches. Decades later he had felt enormous satisfaction when he read the comments of a German panzer commander who was still outraged that he hadn’t been able to get his tanks to the beach because that very bridge had been bombed so completely.

Fred Sampson, 21 and so tall that his pals in the RAF Glider Regiment called him Lofty, worried he’d be a coward on his D-Day mission. He had no time to think about it while landing a huge Horsa glider. The Germans had planted massive poles in rows to prevent gliders from landing (dubbed Rommel’s asparagus). It meant he’d have to land between them, shearing off the wings. On approach, Sampson realized one pole was out of place – and dead ahead. Swiftly, he turned the aircraft forty-five degrees, opening another clear, if narrow runway, safely depositing his cargo: a jeep, anti-tank gun, an officer and five soldiers – and a padre.

Fred Barnard, 23, and brother Don, 20, landed on Juno Beach at Bernières-sur-Mer with the Queen’s Own Rifles (QOR). As the landing craft’s ramp splashed into the water on June 6, Fred shouted “Give ’em hell, Don!” Machine gun fire peppered the air as Fred dashed for the protection of the seawall – he couldn’t stop as he passed his brother lying in the water, a bullet hole through his chest. He’d died so quickly, there was no blood.

The landing at Bernières-sur-Mer was quite enough for Monsieur Paul Martin, 60. He and his family had earlier survived intense bombing huddled in a covered trench as their home burned. Then a Canadian liberator from the Queen’s Own Rifles arrested him and his son Jacques, 19, because they refused to go as ordered to the beach. They couldn’t make the young soldier understand they were not German sympathizers. Then Jacques spotted a Régiment de la Chaudières shoulder patch. “Do you speak French?” he shouted. Sgt. Rosaire Gagnon quickly sorted the situation and the Martins were released. Photos in the town’s Place du Juin 6 show him calming frightened French civilians with friendliness and humour – a week later he was killed by a sniper.

Nearly 60 years later, Jacques told me about Gagnon with obvious reverence. It’s why I visit Gagnon’s grave in the tranquil Beny-sur-Mer Canadian War Cemetery not far from the Juno Beach Centre, to thank him, always moved by his selfless concern for the French people and for the future he and all the others ultimately sacrificed for our liberty.

Winston and Clementine must have felt relief that the casualty list of the June 6 landings seemed much less than anticipated. And I, for one, am grateful that the many survivors of that great operation and indeed, of the Second World War, continued on to provide us with a better world than the one they faced 75 years ago.