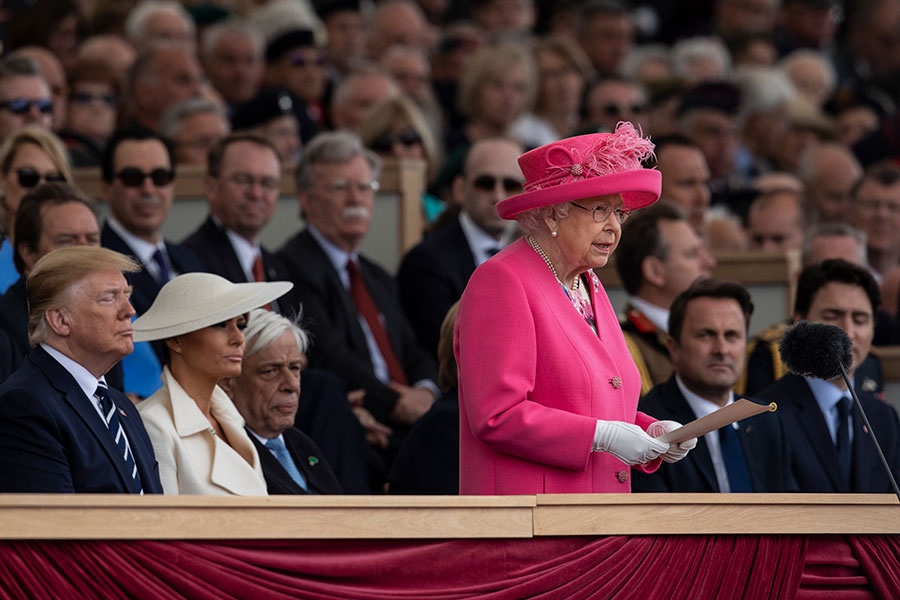 Queen Elizabeth delivers a speech at an event in Portsmouth, England, commemorating the 75th anniversary of the D-Day landings. (Photo: Dan Kitwood/Getty Images)

In an emotional event in Portsmouth, England commemorating the 75th anniversary of the D-Day landings, Queen Elizabeth and allied leaders paid tribute to the continuing resiliency of the war-time generation.

On stage with the leaders of 16 countries — including Prime Minister Justin Trudeau, British Prime Minister Teresa May and U.S. President Donald Trump — the Queen delivered a moving speech about the dedication and endurance of her generation that still persists today.

“When I attended the commemoration of the 60th anniversary of the D-Day landings, some thought it might be the last such event,” said the Queen in her speech. “But the war-time generation — my generation — is resilient and I’m delighted to be with you in Portsmouth today.”

This “resiliency” was on full display as 97-year-old U.S. D-Day veteran Tom Rice parachuted into France — just like he did in 1944, 75 years ago.

“The heroism, courage and sacrifice of those who lost their lives will never be forgotten. It is with humility and pleasure, on behalf of the entire country, indeed the whole free world, that I say to you all: thank you.”

In those dark times, the Queen (quoting her father, King George VI) said the allies needed: “something more than courage and endurance. We need a revival of spirit, a new unconquerable resolve.” That spirit and resolve, said the Queen, “is exactly what those brave men brought to the battle as the fate of the world depended on their success.”

Canadian Prime Minister Justin Trudeau spoke about the sacrifice made by so many and read aloud from the official citation that Lt. Col. Cecil Merritt received for his actions on that day, bravery that led to his becoming the first Canadian awarded the Victoria Cross in the Second World War.

“Waving his helmet, Lt. Col. Merritt rushed forward shouting: ‘C’mon over, there’s nothing to worry about here.’ When held by enemy pillboxes, he again headed rushes, which succeeded in clearing them. Although twice wounded, Lt. Col. Merritt continued to direct the unit’s operations with great vigour and determination. Lt. Col. Merritt is now reported to be a prisoner of war.”

Teresa May read aloud a love letter from Royal Army Service Corps Captain Norman Skinner, which he wrote to his wife on June 3, 1944, days before the D-Day landings. “I can imagine you in the garden having tea with Janey and Anne getting ready to put them to bed … Although I would give anything to be back with you, I have not yet had any wish at all to back down from the job we have to do.” Cpt. Skinner died with the letter in his pocket.

And Donald Trump read a prayer given by U.S. President Franklin D. Roosevelt in 1944. “The enemy is strong. He may hurl back our forces, but we shall return again and again, and we know that by thy grace, and by the righteousness of our cause, our sons will triumph.”