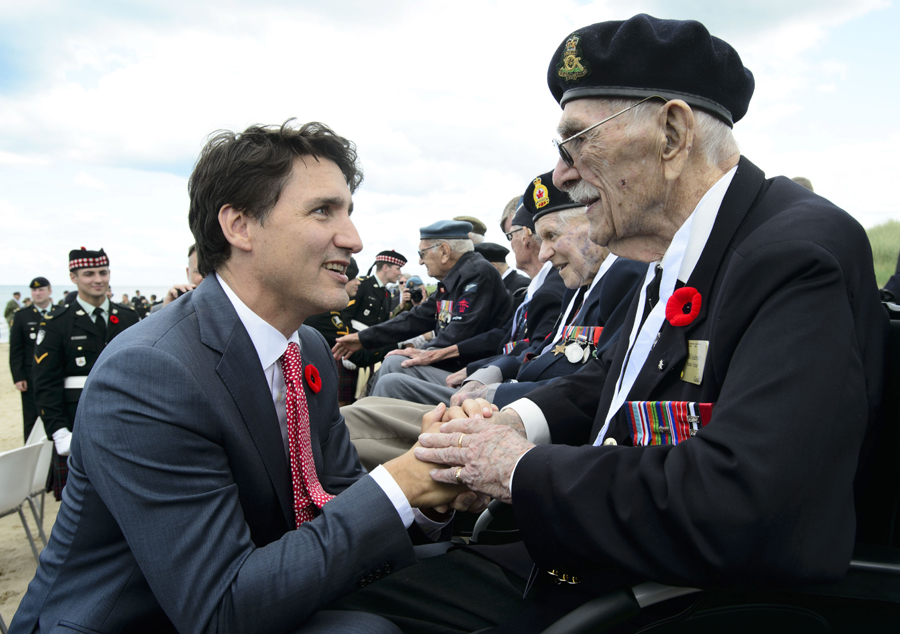 Flanked by D-Day veterans in full uniform on the same Juno Beach shores where, 75 years ago today, 14,000 Canadian troops endured a bombardment of mortars and machine gun fire from Nazi defenders to take the beachhead and help liberate France, Prime Minister Justin Trudeau addressed the honour and sacrifices of those Second World War soldiers at a Canadian D-Day commemoration ceremony.

“Only those who threw themselves against the walls of the fortress of Europe in Normandy know the full extent of what unfolded here 75 years ago,” Trudeau said in his bilingual speech at the Canadian National Commemorative Ceremony earlier today. “But it is the responsibility of all Canadians to ensure that their story, and their sacrifice, will never be forgotten. It is up to us to preserve and protect the values for which they fought, up to us to uphold their proud legacy. And we will not let them down.”

Speaking before a delegation of approximately 5,000 people, including D-Day veterans, their families, Canadian military and political dignitaries like French Prime Minister Édouard Philippe, Trudeau noted that the soldiers who stormed Juno Beach on D-Day did so “with no guarantee of victory,” including “francophones, anglophones, Indigenous peoples [and] new Canadians [who] came together as one.” He also stated that, “I stand here knowing that I can never fully understand what our brave men and women in uniform experienced and will never forget.

“We thank them not only for their sacrifice but for their example; for inspiring countless young men and women to answer the call of duty like they once did,” Trudeau added. “For teaching us the value of service, for showing us the true meaning of honour. We thank them for leaving us a better world than the one they once inherited. We owe an enormous amount of gratitude to the men who fought on the beaches of Normandy.”

During his speech Trudeau singled out individual Canadian veterans for their sacrifice on D-Day. Those in attendance waved to the crowd, who acknowledged them with applause. He later met and thanked the veterans in person.

The ceremony also saw the Prime Minister lay wreathes on the shores of Juno Beach and meet with Canadian troops, while a delegation of Canadian youth referred to themselves as “eternally grateful” as they read writings by D-Day veterans.

The bilingual Canadian ceremony was one of two D-Day events, along with an international commemoration, celebrated along the Normandy coastline today. On Wednesday, Prime Minister Trudeau joined a delegation of world leaders including U.K. Prime Minister Theresa May and U.S. President Donald Trump at a D-Day commemoration event in Portsmouth, England highlighted by a speech from Queen Elizabeth.

“The heroism, courage and sacrifice of those who lost their lives will never be forgotten,” the Queen declared during her remarks. “It is with humility and pleasure, on behalf of the entire country, indeed the whole free world, that I say to you all: thank you.”

RELATED:
I Was There: Canadian D-Day Veterans Recount the Triumph and Terror on Juno Beach