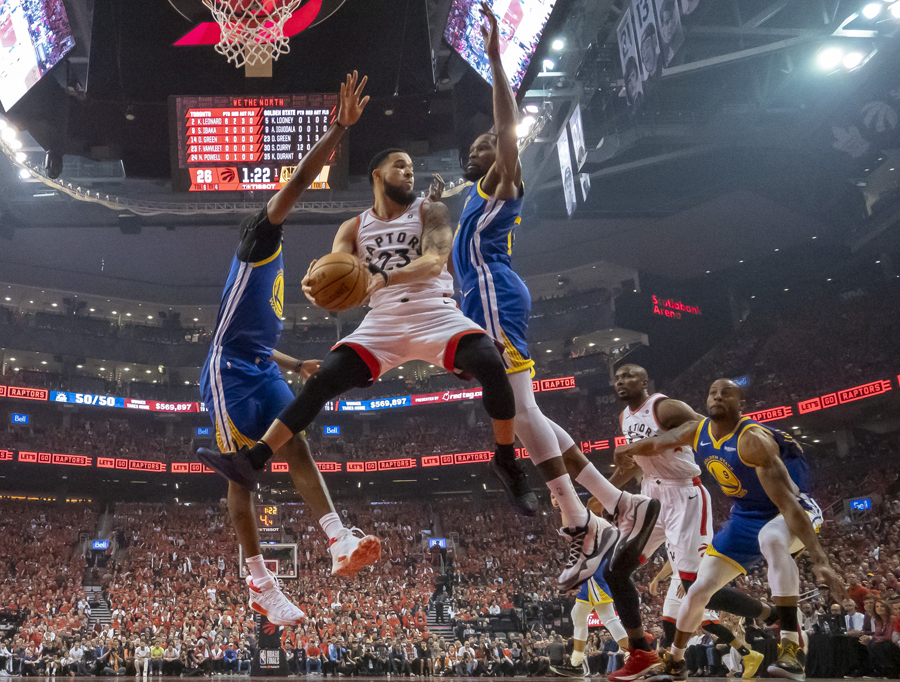 Flashback (in the wake of the NBA Finals, Game 5, which the Raptors failed to nail down, but the champagne remains on ice):

It’s Game 6 of the 1993 World Series. Jays behind in the ninth. Joe Carter at bat. He swings and blasts the first walk-off World Series win in more than 30 years.

I was in a seat in row one of the first deck on the third-base line, my spot for a decade in a seasons-ticket consortium I’d shared with friends since the team played in CNE stadium in sometimes-bitter winds off Lake Ontario. I was a long-suffering fan, and my time had come.

The ball arched seemingly so close on its way to the bleachers, I felt I could reach out and touch it. My memory is the crowd went silent for half a second before they realized what was happening. (Though I’ve since watched replays and the tumult began the second the ball left his bat).

A million people hit the streets. The excitement boiled over unpredictably. People jumped on cars. It wasn’t anything like a riot, but it had the seeds of one, and might have gone that way in defeat, as it did in Vancouver when the Canucks lost the Stanley Cup finals in 1994.

(By way of agony-of-defeat comparison, I was in London on a movie assignment a few days after the Brexit vote, when the English team lost to absurd underdogs Iceland in the Euro 16 playoffs. I watched it in a pub with Wade McElwain, the Canadian comic who’s since moved there, and he warned me, “Do NOT take the tube back to your hotel. Take a cab.” The chance of hooliganism was too high.)

Which brings us to the Toronto Raptors’ improbable place in history, close enough to smell a championship, with the most ardent fans penned up in a single area outside Scotiabank Arena nicknamed Jurassic Park (with still no lawsuit from Universal Studios). Much has been made of the diversity of the faces in Jurassic Park. It’s worth noting their age too. Going nuts is, I’m going to say, a Millennial and Gen Y activity (as is sleeping on the ground for a day or two to make sure you get in).

If you’re manic when they win, you’re manic when they lose, and that’s not fun. And after watching the Jays blow a 3-1 lead in an ALCS series (in ’85), almost miraculously blow a seven-game lead with seven games to play in a season (in ’87) and the Leafs blow every kind of opportunity you can imagine in the 50 years I’ve been a fan, my favourite line to the fatalists and worriers is, “They can’t hurt me anymore.”

It gets a laugh, but it’s also true. Perspective has entered my life as a sports fan and will be there always, even if I live long enough to see a Leafs Stanley Cup. In the meantime, my team can lose and I no longer feel like I’ve been cruelly dumped by a girlfriend. When the Raptors lost on Monday I was disappointed, but I didn’t lose any sleep over it. There’s always Game 6.

The 14-year-old kid who cheered insanely and deafeningly at roller derby on TV when the Canadian All-Stars would win? He doesn’t live here anymore. Believe it or not, you can enjoy the thrill of victory while shrugging off the agony of defeat. There’s no reason my family must live with an angry mood they had nothing to do with.

That said, I’ve been lucky enough to feel championship fever in different places and even if you have, as they say, no skin in the game, mass joy is a high on its own.

I was in New York on an entertainment assignment in 1986 when the Mets won — not the World Series yet, but the ALCS Final against the Astros that put them there. If you’ve seen the scene in Times Square when they drop the ball at New Year’s, imagine all of Manhattan being like that. (I later got to see one of those World Series games, a matchup at Shea Stadium between aces Roger Clemens and Dwight Gooden that turned into a Boston blowout, courtesy of Gooden’s then undiscovered coke habit).

I was in L.A. in 1988 covering that year’s upcoming network television season when the Lakers beat the Pistons in Game 7 of the NBA Finals. A sadly now-late friend who was a writer for the (now defunct) Los Angeles Herald Examiner took me to what amounted to a speakeasy (no sign, steel door) where local newspaper types hung out. There, all pretense of media objectivity was lost, as Magic and Kareem nosed out a Pistons team whose star, Isiah Thomas, was on the limp (though I don’t remember anybody whining about it the way Warriors fans whine about KD). L.A. is a diffuse place, so street celebrations were on a neighbourhood basis, downtown, West L.A., Westwood (near UCLA).

And one of the best assignments I ever had was also in 1988, when I secured an “all-access” press pass to the Dodgers/Athletics World Series, with the assignment of interviewing celebrities at Game 1. Then Blue Jays PR guy, Howard Starkman (now deservedly in the Canadian Baseball Hall of Fame), snuck me a “map to the stars’ luxury boxes” and I made it my mission to smarm my way into Frank Sinatra’s.

I was surprised there was so little security. And it turned out to be because Frank wasn’t there. But Don Rickles and his family was. I sat with the great “Mr. Warmth” and watched with him as Jose Canseco hit a grand slam (Rickles made some comment about Canseco “dancing the marimba” down the bases).
But I was in the press box for the Big Moment, when a hobbled Kirk Gibson hit the legendary, unlikely walk-off homer that set the tone for the Dodgers’ eventual series win. (Sports reporters aren’t allowed to make “fan noises,” but there were a lot of loud “Whoas” when it happened).

There are those who will never “get” sports. But in these days of polarized views on everything from politics to pizza, it’s uplifiting to see an entire population united in celebration, even over something as ephemeral as a game.

And if a choke for the ages happens (again), this veteran sports fan is here to say, “They can’t hurt me anymore.”