Not Just for Show: Why Maintaining Our Muscles Is Important to Healthy Aging 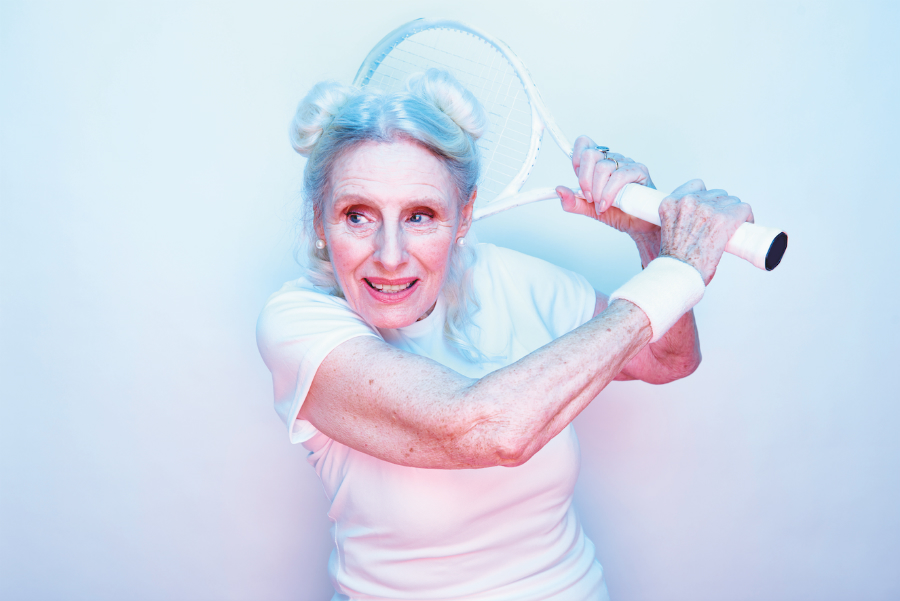 To celebrate his 70th birthday in 1984, Jack LaLanne swam 1.5 miles of the Long Beach, Calif., coastline, towing 70 people in 70 boats — and he was handcuffed and shackled at the time. LaLanne was the pioneer of the fitness movement, opening one of the first health clubs in the United States in 1936 and was always his own best advertisement until the day he died at the age of 96. While most people wouldn’t choose to spend their birthdays the way he did, his message was — and is — still a powerful one: “Get up, exercise and feel good!” And it’s one we ignore at our peril.

The precipitous decline of estrogen that occurs at menopause comes with a well-known list of potential side effects — everything from hot flashes and sleep disturbances to migraine headaches and palpitations. But estrogen is also the primary bone-building hormone in women, and its decline spells trouble: the ratio of women to men who suffer from osteoporosis is as much as 4 to 1, according to Dr. Stuart Phillips, a professor of kinesiology at McMaster University in Hamilton and director of the university’s Physical Activity Centre of Excellence (PACE). “And when they fall, they fracture,” he says. “And a fracture at that point in your life is a watershed moment, a true blow to people’s health and to quality of life. To bounce back is pretty much next to impossible.” Indeed, according to a study of women over 85, few were still alive five years after their fracture.

Similarly, testosterone is the bone-building hormone for men, but because its decline is far more gradual and much less dramatic, men are not as prone to fragile bones and fractures as women. Men’s muscle mass, on the other hand, decreases with age a little more quickly than it does in women. But even lifelong exercisers will experience a decline. “From humans to monkeys to rats to cats, it doesn’t matter where we look, every organism as it ages does less,” says Phillips.

One of the reasons muscle mass decreases in all people is because of denervation, a loss of some of the nerves in the spinal cord that send messages to the muscles. On average, between the ages of 30 and 75, people lose as much as 30 per cent of these nerves; the result is called denervation atrophy. “Lose the nerve and the muscle doesn’t know what to do,” explains Dr. Mark Tarnopolsky, professor of pediatrics and medicine and director of the neuromuscular and neurometabolic clinic at McMaster University Medical Centre. “So the muscle just shrinks.”

There are also biochemical features of aging that can cause damage to the muscle and lead to muscle loss. When mitochondria, which are the part of the cell that converts food into energy, cease to work properly as we age, muscles don’t derive as much energy from the cell. “The energy is what actually keeps the factory moving, for lack of a better term,” says Tarnopolsky. Mitochondrial dysfunction can also cause oxidative stress, from an excess of free radicals. These free radicals can damage protein, DNA and lipids, all important components of muscle. Mitochondrial dysfunction can also activate undesirable processes: inflammation; apoptosis, or programmed cell death; and senescence, which renders cells less responsive to stimuli. “They go into a state of quiessence, a form of hibernation, and don’t respond to exercise, don’t respond to nutrition as well as young people’s,” says Tarnopolsky.

But all of these changes can be lessened with exercise. And — no surprise here — the earlier you start, the better. In fact, Phillips suggests that the best outcomes tend to occur in people who are battle-ready, who have entered middle age — and the time before hormones really start to decline — in their best condition. “Try to hit your peak bone density early in your life — into your late 30s — hang on to it and prepare for the decline,” says Phillips. “Everything is going to decline, there’s no question, but you’re starting at a higher level. It’s almost as if you’re trying to inoculate yourself against what you know is going to happen.”

Patricia Baker, 78, didn’t set out with that goal in mind, but she has always naturally been active — an ardent walker, hiker, gardener and swimmer. Twenty-seven years ago, she upped her game by joining a gym, and since 2014 she’s worked out twice a week with her husband, 82. “We’re there for a couple of hours each time, doing about 40 per cent cardio and 60 per cent resistance training,” says Baker. “We walk every day and we live in a house with five sets of stairs.” Baker also does Scottish country dancing, barely uses the car and for the last two years has been leading Aquafit classes twice a week for people — all of whom are retired — in her townhouse condo complex in Hamilton. “I’ve really noticed a huge difference in the participants,” she says. “It’s been great to see that, and I can push them now, a little bit.”

Baker has reaped the benefits of her active life in ways that reach beyond healthy strength and stamina. She has gone through two rounds of breast cancer, requiring several surgeries and medications, the potential side effect of which was bone loss. But her bone density remained perfect. “Doctors put that down primarily to my activities at the gym,” says Baker. Similarly, in 2014, when she was having an X-ray for something else, doctors discovered that she needed a hip replacement. “I wasn’t even in pain because the muscles were holding my hip,” she says. Baker worked hard at her recovery, which was quick, and has never had to give up anything she was doing before. “My husband and I can still consider doing things that I know many people our age can’t.”

That may be the ideal, but it’s never too late to start. Phillips and many other researchers have shown that when people over 65 and even into their 90s start a regime of cardio/endurance and strength-training, there are improvements — maybe not as significant as in someone who has always exercised but still … “It’s sort of trite to say  if exercise came in a pill and
had all these great effects in terms of reducing risk of demen-tia, Alzheimer’s, cancer and cardiovascular disease and of reducing pain from osteoarthritis to osteoporosis, would you take it?” Phillips says. “Geez, we’d all be taking it. It’s almost embarrassing to talk about exercise as the cure-all without blushing a little bit.”

The idea is to be active enough to maintain cardiorespiratory fitness — how well your heart and lungs work together to move blood around the body and to the muscles. And the simple rule for muscles is “to keep them as strong as possible for as long as possible,” says Phillips. That all boils down to exercising the equivalent of 30 minutes a day, seven days a week, and that relatively small amount is enough to improve oxygen consumption, increase mitochondria and motor nerves and lower oxidative stress. Ideally, aerobic exercise should be in the moderate to vigorous range for 150 minutes a week (minimum), and strength or resistance training should be done twice weekly. “When you do that, the reduction in risk for all known chronic disease goes down by as much as 30 per cent, even for 13 of the 26 most common types of cancer,” says Phillips.

And what about weight? Neither Phillips nor Tarnopolsky pay too much attention to weight in older people, even if the decline in hormones has led to a little extra around the middle. Too much weight is more of a concern among people in their 30s, 40s and 50s. “Then, your risk goes up quite substantially,” says Phillips. “Weight on a scale is less important as you age, and it’s more important to be physically fit and strong.” Phillips has no time for BMI, a method of measuring body mass. A more meaningful measurement for any age is waist circumference, with men ideally measuring under 37 inches and women less than 33, he says. “It’s a valuable proxy for the amount of visceral fat you have — the fat that’s inside your abdomen,” he adds. “You really don’t want that to accumulate.”  Visceral fat, which is deep in the abdomen, wraps around organs and is linked to an increase in risk for stroke, Type 2 diabetes and heart disease.

More likely and concerning in older people is sarcopenia, or muscle loss. “Generally the problem with most older adults is that they are so skinny, so thin, because they have sub-optimal diets and too little activity,” says Tarnopolsky. “They’re eating too little protein, not doing enough exercise and many tend to be really sarcopenic.”

In the end, as Phillips points out, the rate of mortality is still 100 per cent. But it’s not about what kills you; it’s about how you live. And strength and fitness have everything to do with quality of life. When he talks to older people about fitness, Phillips uses the line from the famous Dylan Thomas poem: “Rage, rage against the dying of the light.” He adds: “Just fight and scratch and scrabble, and don’t accept — never accept — somebody telling you, ‘Well, you’re getting older …’ Fight the fight and hopefully live as long and with as good a quality of life as you can.”

One of the reasons the words “human growth hormone” are part of our consciousness is the number of competitive athletes who’ve been caught using a synthetic form of it, often mixed with anabolic steroids, to enhance their performance. Human growth hormone (HGH) is produced by the pituitary gland, but after about the age of 30, production slows down and that contributes to such age-related changes as decreased muscle mass, bone loss and weight gain. Since 1990, when a study published in the New England Journal of Medicine showed increases in lean body mass and bone density in 12 men over the age of 60 who were taking growth hormone, so-called anti-aging experts have touted it as a fountain of youth.

But while HGH is available as prescribed injections for children and adults with specific diseases or growth conditions, it is not approved by the U.S. FDA or Health Canada for use in healthy adults. That said, some people obtain injectable HGH from doctors to increase bone density and muscle mass (though it does not appear to increase strength). And many companies produce unregulated over-the-counter HGH products in pill or spray form as anti-aging drugs, though whether those have the same effect on the body as the prescription HGH is unknown.

What is known are the potential side effects of human growth hormone for healthy adults. According to the Mayo Clinic, those include:

And HGH use may negatively impact other conditions, including Type 2 diabetes and heart disease and contribute to an increased risk of certain cancers.

“My rule of thumb is, if there’s something that sounds too good to be true, it probably is,” says Prof. Stuart Phillips, professor of kinesiology at McMaster University in Hamilton, Ont.