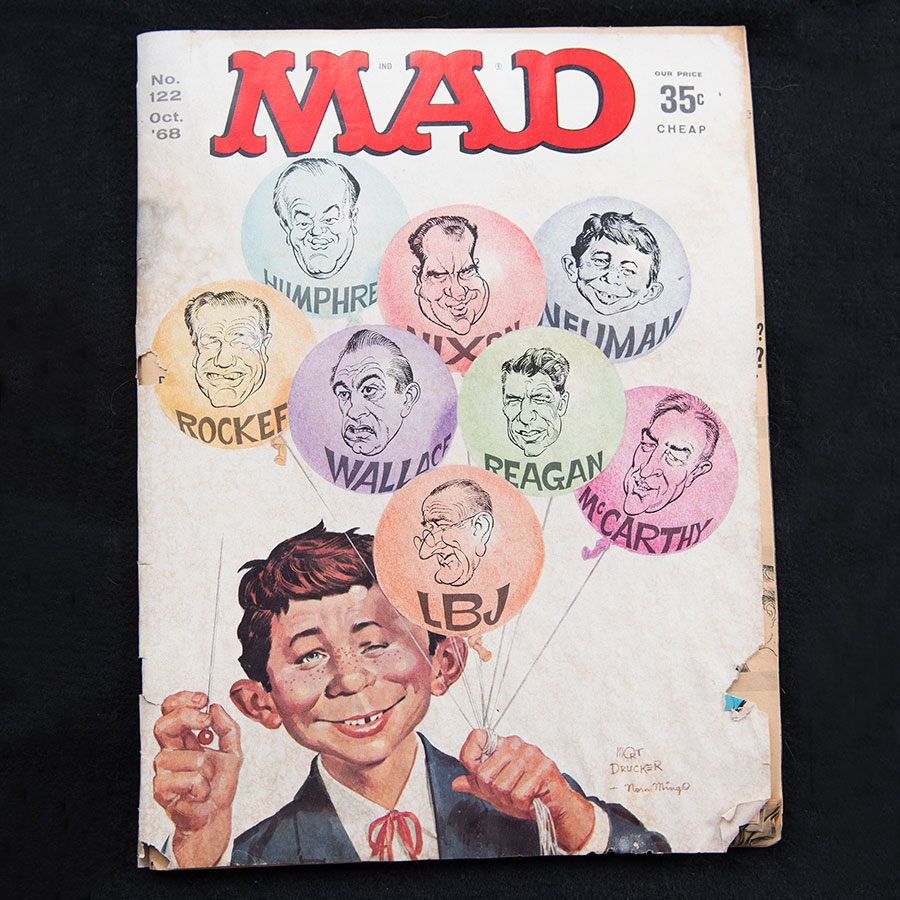 I’m pretty sure there weren’t many 10-year-olds in 1968 who knew who Charles de Gaulle was.

I did, sort of, courtesy of a satirical poem Frank Jacobs wrote in Mad magazine, which I can still recite from memory (don’t even try to Google it).

“You double crossed your NATO pals/you finked on Western Europe/And then you came to Canada to see what you could stir up/So now we know how great you are at causing repercussions/We wish you’d turn your big nose East/And go louse up the Russians.”

What else did I know about the Cold War? How about a West Side Story spoof, East Side Story, by the great caricaturist Mort Drucker, with the song “When You’re a Red,” sung by Khruschev, Tito, Gromyko and Castro. It began, “When you’re a Red/You’re a Red all the way/From your first party purge/To your last power play.”

I didn’t know why these guys in boxy suits were dancing, but it was a funny image, and the words lit a spark. Soon after, I watched West Side Story for the first time on TV.

There’s a younger generation that knows almost everything it knows about history and vintage pop culture from Simpsons references (a show which, fittingly enough, included Mad among its references).

Similarly, in its prime, Mad magazine — which announced Wednesday it was officially ceasing publication after 67 years — spoon-fed me all kinds of big ideas in funny ways.

Yes, Greek philosophers. In the late ‘90s, before there was social media or even Google, I was writing a column in which I wanted to make a point about how far back complaining about kids today went. I remembered a quote from Socrates that Dave Berg used in one of his human-condition “Lighter Side” cartoons.

I wanted the answer fast, so I posted in a Mad fans community bulletin board asking if anybody remembered the cartoon and, if so, could they call me on my office number.

Shortly after, to my shock, Dave Berg himself phoned me. After confirming the quote (it begins, “Our youth today love luxury” – that one you can Google), he indulged a lengthy chat about himself and all the other Mad geniuses I idolized.
He related that his friend Don Martin (he of the cartoons whose characters all seemed to have hinged feet) was in poor health and not expected to live much longer. We talked about Sergio Aragones and Drucker, and especially about Mad editor Bill Gaines, whose stamp defined Mad’s humour for 40 years (and whom Berg depicted physically in what seemed like every portly male character in his touchingly realist cartoons).

As someone who went on to become a movie critic, my sense of “reviewing” a movie was largely ignited by Drucker’s parodies, which honed in on actors’ idiosyncrasies, plot-holes and sacred cows (though I do consider Kubrick’s 2001 to be a proper classic, Drucker’s “201 Minutes of a Space Idiocy” presented a worthy and funny counter-argument).

And the title puns! The Towering Sterno (spoof of The Towering Inferno), The Agony and the Agony (The Agony and the Ecstasy), Who In Heck is Virginia Woolf?, Throw Up (Antonioni’s Blow Up), Guess Who’s Throwing Up Dinner? On a Clear Day You Can See a Funny Girl Singing “Hello Dolly” Forever.

But the closest that Mad magazine came to “water-cooler” comedy for kids, was Al Jaffee’s Snappy Answers to Stupid Questions, which we’d bring to school and read out loud to our friends, making them laugh themselves silly.
Sample (To a guy clearly building a dog house): “Are you building a dog house?”
Answers: (1) “No, a spare room for my mother-in-law, Fido!” (2) “No, a hotel for dwarfs.” (3) “No, a garage for my compact car.”

It was Sarcasm: 101 for a generation that would grow up with a lot to be cynical about. Jaffee, by the way, is still alive and snarking at age 98.

There came a time for me, about age 14, when I’d gleaned as much parody as I could from Mad magazine, and moved on to its darker, and more scabrous step-child The National Lampoon (also now deceased). Mad was outside my radar, resurrected only partly in spirit by the Mad-TV sketch comedy series, which, while enjoyable, seemed more interested in imitating Saturday Night Live than in bringing the experience of the magazine to the screen.

And now Mad is dying the death of so many touchstones from my youth, amid the new reality of an everything-is-free digital generation, and a political environment that parodies itself.

But for many of our demographic, the memories of the “Mad Fold-in,” Spy versus Spy, Sergio Aragones’ “drawn-out dramas” in the margins of the magazines, throwaway Yiddishisms like “fershlugginer,” and, yes, Mr. “What Me Worry?” himself, Alfred E. Neuman, will connect us with a shared comedy-school experience.