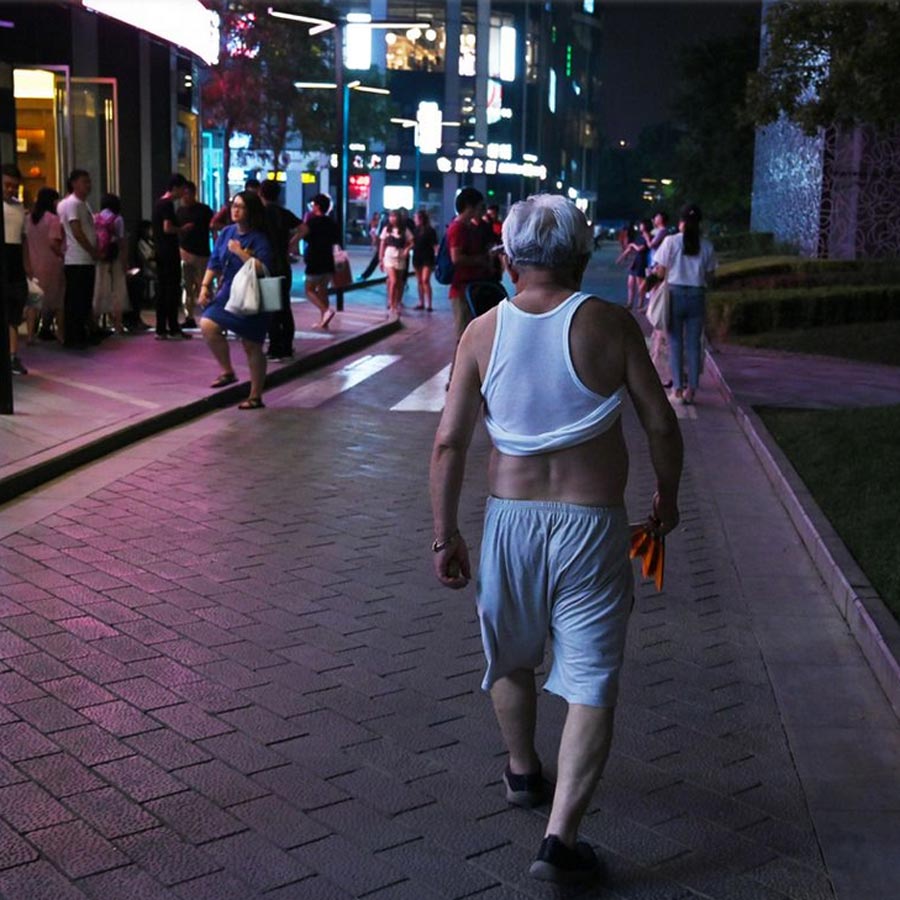 In much of China, there’s a longstanding summer practice nicknamed the “Beijing Bikini,” which sees overheated men lift their shirts to hang atop their bellies. The fact that they have bellies to hang atop suggests we are not talking teenagers here.

It’s a funny euphemism. But on a serious note, it’s worth noting that temperatures in southern China have been nudging 40 degrees Celsius. And older people have a higher susceptibility to heat. Europe, in fact, has been suffering through 40-plus Celsius temperatures — the highest since 2003, when 70,000 people, many of them seniors, died from heat-related conditions. In 2015 in the Russian Federation, another heat wave killed more than 50,000.

And yet, Chinese government officials have decided that the sight of mature flesh is unsightly, and cities across the country have begun banning “casual exposure” among “bang ye” (literally “exposed grandfathers”).

In the Beijing port of Tianjin, the fine for exposing your belly can be up to 200 Yuan (about $30, or about a day’s salary for most workers). The party line is this banning will beautify the cities. The government has produced public service announcements with daughters embarrassed by their dads’ state of undress.

But on Chinese social media, where people, rightly or wrongly, feel freer to express their opinion, the prevailing attitude seems to have been that “bang ye” is an ancient tradition, that elders should be respected and allowed to be as comfortable as possible. And anyway, it’s better for the environment to cool off naturally than to crank up the air conditioning.

On a larger scale, the Chinese experience reflects a cross-cultural discomfort with the issue of aging bodies. Nobody is targeting young people here, since it is a complaint-driven charge and who doesn’t want to see pretty young things?

Go to a classical museum and you’ll see Greek and Roman depictions of physical perfection. You’ll rarely see an elder represented nude, as opposed to under layers of togas and robes.

And yet, given half a chance, the older demographic will revel in the sun as if no one’s watching or they just don’t care. The documentary The Last Resort (released in theatres this year and available on Netflix), tells the story of the glory days of Miami Beach — back when the Rat Pack played the Fountainbleu and the Jackie Gleason Show was filmed there.

That brief Renaissance was fuelled by a migration of older Jews, many of them Holocaust survivors, who’d begun their new post-War existence in New York and other East Coast first stops. After fulfilling their obligation to their children, they carried on to retirement with a will to enjoy the sweet life under the Florida sun, dressed appropriately for the heat (or inappropriately, according to the Chinese government).

The movie lovingly focuses on every wrinkled body stretched out on a beach chair and every happy face living its last act in the most enviable way.

The message: All bodies should be celebrated, or at least not treated as a big deal. It’s an ethos shared by naturists — what we used to call “nudists” — a lifestyle shared by 83-year-old Johanna Kapteyn-Hall of Port Elgin, Ontario and her 89-year-old husband John.  Full disclosure: Johanna — “Angie” to us — is my wife’s aunt. She and her husband are both remarkably fit, and she asks wryly of the Chinese law, “since I have a smooth, unwrinkled, attractive belly, would I still be charged?”

Further, she asks, “If I tattoo a beautiful flower or paint a pretty picture on my exposed body part, will I be okay?”

For about 30 years, the Kapteyn-Halls have traveled to naturist retreats in Ontario during the summer, and been clothing-optional snowbirds (jaybirds?) at a naturist RV and trailer camp in Florida.

She calls the Chinese crackdown on bellies, “disturbing.”

“Covering up an aging belly because it may not be attractive to others is utter discrimination,” she says. “As a naturist, one sees exposed bellies of all shapes. And many are older folks, who are perfectly comfortable with no longer having a beautiful belly.”

She suggests that, during heat waves, “simply look people in the eye and comment on the hot day.”

My suspicion is, as with most things in a country as old as China, that tradition will outlast trends, and the “Beijing Bikini” will endure.

In this case, the trend reeks of Westernization, an embrace of our attitude towards body image, which frankly isn’t one of our best traits as a society. Even in our prime, an infinitesimal few of us had what it took to be a swimsuit model, and accepting ourselves can be a lifetime process.

It is both a matter of dignity for the aged, and, increasingly with global warming, a matter of life and death that people be allowed to keep cool by any means necessary.