The Long and Winding Road: What’s at Stake For Election 2019? 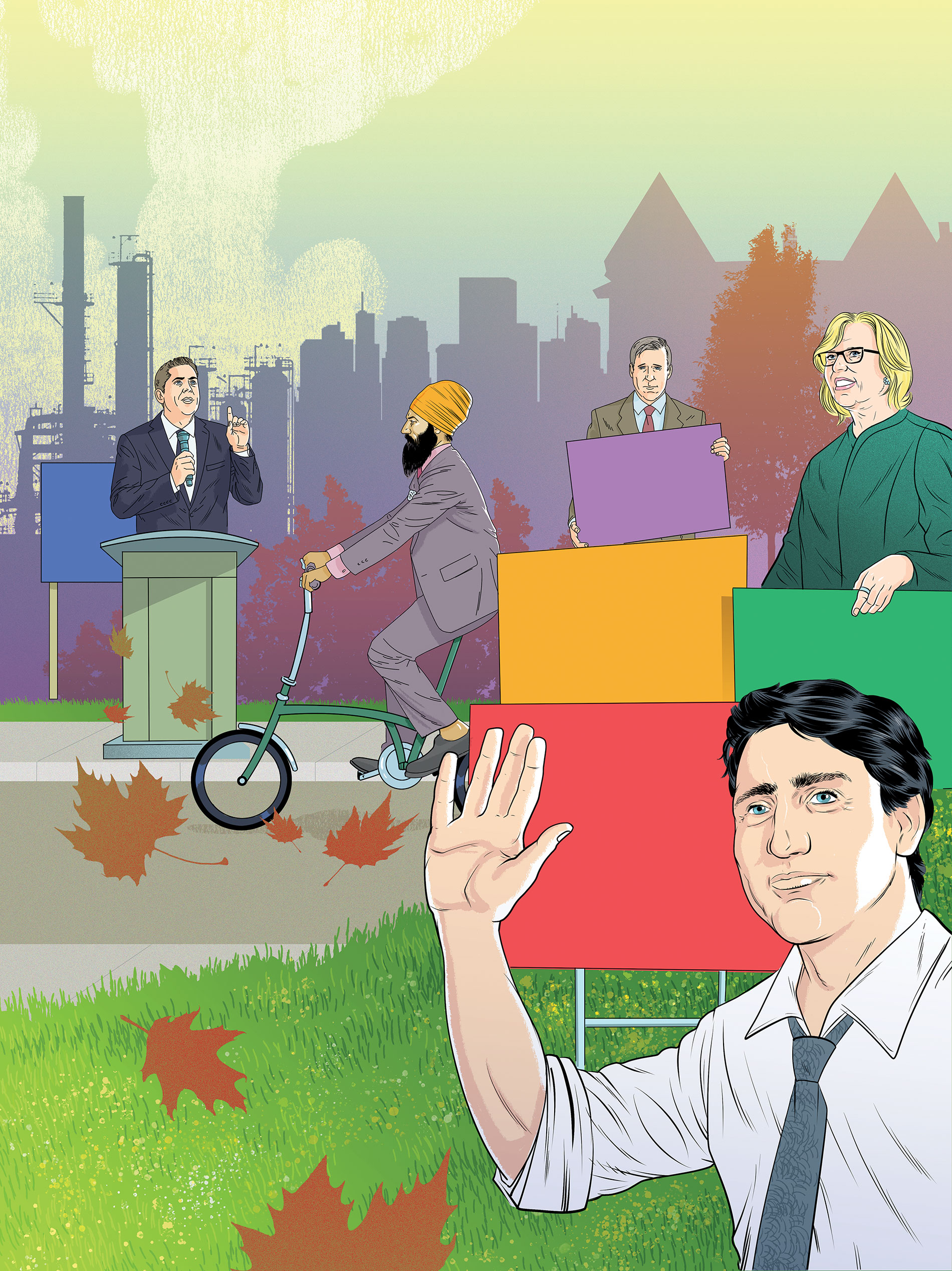 Before you get lost in a thicket of lawn signs, polls, attack ads and fake news, we take an early look at what’s at stake for Election 2019

When Prime Minister Justin Trudeau woke up on the morning of Feb. 7 this year, everything must have seemed just right in his world.

With a federal election coming up in less than a year, his Liberals were riding high. The economy was showing signs of strength, jobs were being created at a record clip and trade confidence was sky-high, spurred on by the government’s successful negotiation of a new trade deal with the U.S. and Mexico.

Moreover, Trudeau’s political opponents were in disarray: Conservative leader Andrew Scheer hadn’t yet emerged from the shadow of Stephen Harper, NDP leader Jagmeet Singh didn’t even have a seat in Parliament and Green Party leader Elizabeth May was a party of one in Ottawa.

Four years into his mandate, the forecast still promised lots of sun. Despite a few PR glitches and a much-ridiculed trip to India, Trudeaumania 2.0 was chugging along – the media were onside, and polls suggested he’d have no problem following in his father’s footsteps and deliver a second Liberal majority government.

But with the news that fateful morning, everything changed.

The Globe and Mail ran a front-page story accusing certain members of the prime minister’s office of putting undue pressure on then-Attorney General Jody Wilson-Raybould to legally intervene on behalf of SNC-Lavalin, a Montreal-based engineering firm that had run into legal problems. The implication was clear: members of Trudeau’s inner circle had tried to influence the attorney general to help out SNC-Lavalin – not simply to save jobs but, more to the point, to save jobs in a province that was so key to their re-election chances.

The scandal mushroomed from there and began claiming victims. First, Wilson-Raybould resigned her Veterans Affairs posting, as did close friend Jane Philpott from the Treasury Board. Eventually, both were unceremoniously expelled from caucus. Key Trudeau adviser Gerald Butts fell on his sword, and finally Michael Wernick, Clerk of the Privy Council, resigned for his role in the affair.

The Liberals’ political fortunes had been turned upside down and the party’s integrity, for the first time under Trudeau’s leadership, was being called into question. It hardly seemed possible but, all of a sudden, the 2019 federal election was very much up for grabs.

For Trudeau, a leader who depends so much on image, the scandal proved to be a huge blow to his brand. Before SNC-Lavalin, he was a veritable beacon of progressive virtue signalling, promising to empower women by promoting them to key positions and professing that he cared deeply about indigenous reconciliation. So why did he demote (and, of course, later expel) a high-profile female cabinet member who also happened to be indigenous and a champion of reconciliation?  The optics did not look good.

The backlash reached its apex during Wilson-Raybould’s testimony to the House Justice committee, where she released secretly recorded phone conversations and tried everything possible to besmirch her former boss. When the bloodletting was over, Trudeau emerged a weakened politician, viewed by many as just another untrustworthy leader who would resort to anything to stay in power. True or not, this narrative was reflected in the polls, which knocked the Grits into second place behind the Tories.

Scheer’s Conservatives could make it close

While Scheer certainly stickhandled his way through SNC-Lavalin with dexterity, he won’t be able to form a government based solely on that. Voters have notoriously short memories and, by the time October rolls around, it will be six months since the scandal was laid to rest.

As ever, the spectre of Donald Trump looms over everything, including the right-wing element in the Conservative Party. A recent cover of Maclean’s castigated Scheer for failing to crack down on his “bigoted and xenophobic” supporters. Sound familiar?

Plus, Scheer is gambling that an alliance with Ontario premier Doug Ford and Alberta premier Jason Kenney to vigorously fight the Liberal carbon-tax scheme will pay off with voters in those two provinces. He’s also hoping to recreate the same magic formula that saw Kenney romp to victory over Rachel Notley’s NDP in Alberta this year and Ford destroy Kathleen Wynne’s Liberals in Ontario last year.

But hitching your wagon to Ford’s star is a strategy fraught with peril and may evoke a big raspberry from voters, much like the one Ford received at the Toronto Raptors’ victory parade this past June. The boos came from a largely gen-Y– and -Z racially diverse crowd, a group that is expected to flex their political muscle in this election.

And while the Tories rail against the carbon tax (they’ve already lost two provincial court cases on that front), the environment has emerged as a big issue in this election, especially with millennial voters. The Green Party, long a political afterthought, has become a relevant player on the political scene.

This spring, they took everyone by surprise by winning a by-election in B.C., doubling their total number of seats in Ottawa. They’ve positioned themselves as the only party that can solve our carbon emissions problem – neither the compromising carbon tax scheme or pipeline decision of the Liberals nor the ho-hum alternative plan offered by the Conservatives have been judged effective by voters. With leader Elizabeth May a hot guest on political talk shows, for the first time ever the Greens have cracked double digits in support from Canadian voters.

This trend is playing out in the European elections as well, where the Greens won a record number of seats this spring. And should this sudden surge continue for the fall election, the small party could have a big effect on the results – while they won’t win many seats, a strong showing could see them play a spoiler role in close races, bleeding support from both the Liberals and the NDP.

NDP Struggles to Find its Niche

On the same side of the political spectrum comes the NDP, struggling to carve out its niche between the Liberals and Greens. Struggling at the polls, party optimists will point to the rise in socialism in the U.S., especially among younger voters. If that spills over here, it will be NDP leader Jagmeet Singh’s best hope to reinvigorate his party’s fortunes by enticing the same millennial voters who backed the Liberals in droves last election.

The People’s Party a Spoiler?

The rise of the Green Party in the European arena coincided with success of populist right-wing parties – both coming at the expense of the traditional centrist parties. Might Maxime Bernier’s People’s Party with its libertarian clampdown on immigration message appeal to disaffected Conservative voters? Don’t look now but, in an election where every seat will count, the late Rob Ford’s wife, Renata, is running for the fledgling party in her husband’s old stomping grounds.

All this is happening as parties and voters struggle to come to terms with digital-era election campaigns. With its fake-news stories, doctored videos and foreign-influenced campaigns, online platforms succeed by sowing confusion, creating a maelstrom of misinformation similar to the one that wreaked such havoc in the 2016 U.S. presidential race.

Indeed, the Canadian Centre for Cyber Security suggests the time may be ripe for third-party election meddling, saying it’s “very likely” that there will be “some form of foreign cyber interference ahead of, and during, the 2019 federal election.”

From political scandal to a splintered electorate to the specter of social media, this fall’s election promises to be like no other. And with the stakes at an all-time high, our election package will help you make an informed choice when you cast your ballot.