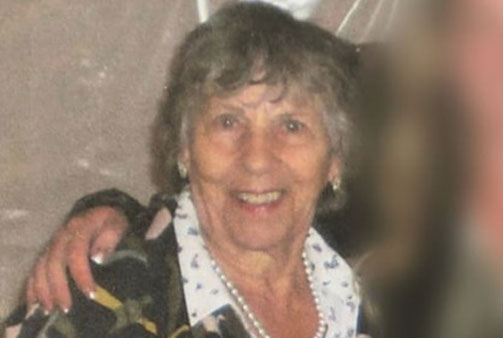 Mary Byman, 84, who went missing Wednesday night, was found by search-and-rescue volunteers after 4 days in the woods. Photo: CBC/Facebook

After enduring four days lost in the woods, octogenarian Mary Byman was found with her sense of humour intact.

The 84-year-old, who was separated from a friend while blueberry picking in a forest in southern Manitoba late Wednesday, had some unusual requests after she was found Sunday night.

“A cold beer and hot tub — that was her two requests,” Crystal Leigh, one of the rescuers who found Byman late Sunday night near Piney, Man., told CBC news. “She thought when she was in the hospital, that’s what they should give her first, was a cold beer. ”

Byman’s disappearance triggered a days-long search by dozens of volunteers from across the province. And while the search had officially ended Sunday evening, a select few refused to give up.

Leigh and her husband, John Friesen, who made the trip from their home in Piney to help look, met up with Darryl Contois, a volunteer with decades of search-and-rescue experience who had decided to camp in the area with his son before continuing the search.

Contois — who runs a volunteer search and rescue group called Evelyn Memorial Search Team — said he heard a faint cry after firing his rifle. With a few more shots — each followed by a cry for help from Byman — the group located her under a tree in a shallow hole filled with water, exhausted, soaked and freezing. Byman told them she had been there for a day, too exhausted to continue walking.

“I knew it wasn’t just imagination. It was really someone calling back to us. That was amazing,” Friesen told the CBC of the moment they heard her cries for help. “And just seeing her … she had a smile. [That’s] what I can’t forget.”

She had lost her shoes days earlier, Friesen added.

“She is just amazing. She must be the strongest woman on Earth to have gone through what she went through,” Leigh told CBC.

“She was just in the best of spirits. She kept her sense of humour.”

Sherry Lyn Marginet, one of Mary Byman’s daughters, confirmed that her mom is recovering in a hospital in Steinbach, about 50 kilometres south of Winnipeg.

“First thing in the morning when I got a hold of her, I said, ‘You know, you’re one tough bird.’ She says, ‘Oh yeah, I am,'” Marginet told CBC Monday. “She’s just a hearty person who loves life, and she has tenacity and she wouldn’t give up.”

As for Byman’s hankering for an ice cold beer, she’ll likely have to wait until she’s out of hospital. The family plans to have a thank you party with all the people who helped find her missing mom — all of whom will know what to bring.

“We’ll definitely go visit,” Friesen told the CBC on Monday. “We’re definitely going to go there with a box of beer.”