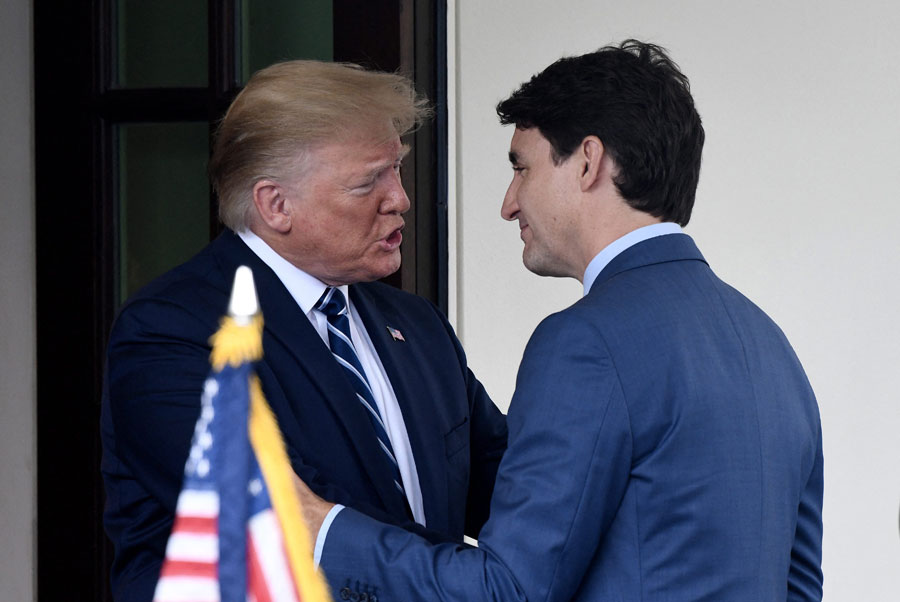 The relationship between Trudeau and Trump have been marked by acrimonious — and sometimes sarcastic — exchanges. and (Photo: Olivier Douliery/ABACApress.com/The Canadian Press)

In what’s being dubbed as “Sharpie Diplomacy,” it was revealed yesterday that the leaders of Canada and the U.S. have been sending each other clippings of stories along with snarky notes written in marker.

According to Axios, President Trump started the exchange by tearing off the cover of May 2017 Bloomberg Businessweek with a banner headline asking “Is Trudeau the Anti-Trump?” Trump wrote in silver Sharpie “Looking Good! Hope it’s not true!” and had it mailed to Trudeau.

The Canadian ambassador who received the mail assumed it was a prank but was subsequently informed that, no, this was an actual missive from Trump.

Trump followed this up by sending Trudeau a document showing trade figures between the two nations, and again broke out the Sharpie to write “Not Good.” Trudeau responded to this by sending Trump a document (issued by the U.S. government, no less) that disputed the President’s trade figures. The Prime Minister circled the relevant numbers, and put a smiley face on it. (No surprise there).

All in good fun, according to officials on both sides, and some much needed levity to break up the sometimes acrimonious political barbs trade negotiations that have raised temperatures on both sides of the border.

But what if Trump and Trudeau decided to continue on with this Sharpie Diplomacy. Perhaps their future correspondence might look something like this.

Trudeau responds with the cover of himself on Rolling Stone with the headline: “Why can’t he be our President?”
Sharpie Message: “Good question!” 4. Trump sends clipping of Guardian article: “Stop swooning over Justin Trudeau. The man is a disaster for the planet”
Sharpie Message: “Trouble with the tree-huggers?”

Trudeau responds with Scientific American article: “In Environment Speech, Trump Fails to Mention Climate Change”
Sharpie Message: “Did you also fail to mention the earth is round?”

6. Trump sends Time’s “Person of the Year” with him on the cover.
Sharpie Message: “At least I got one of these!”

Trudeau responds with a printout of the Zoomer Primary:
Sharpie Message: “But I made it on Mount Rushmore!”

Trudeau closes his end by sending the President a Donald Trump Out of Office Countdown calendar.
Sharpie Message: “Thinking of you. Every day! 😀“